Brief History of the Bagpipes 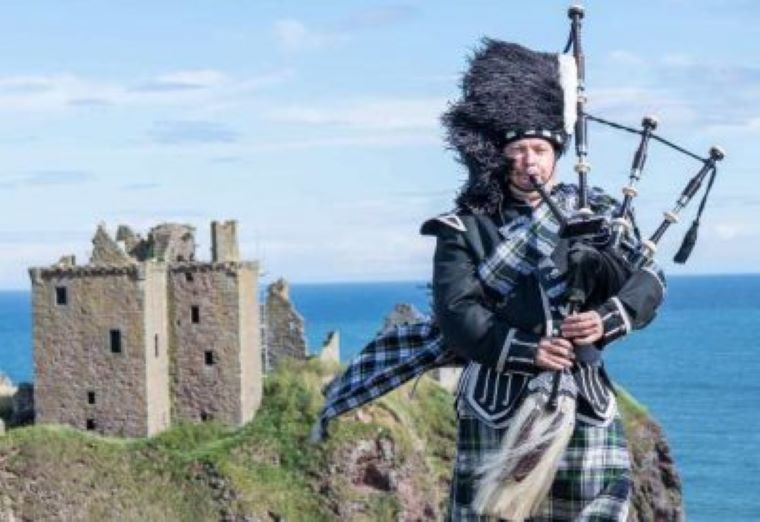 Bagpipes are thought to have been first used in ancient Egypt.

The bagpipe was the instrument of the Roman infantry while the trumpet was used by the cavalry.

Bagpipes existed in many forms in many places around the world. In each country the basic instrument was the same, a bag with a chanter and one or more drones. Some of these were mouth blown while others used a bellows attachment to supply the air. The bag provided a sustained tone while the musician took a breath and allowed several tones to be played at once.

The origin of the pipes in Scotland is uncertain. Some say it was a Roman import. Others believe that the instrument came from Ireland as the result of colonization. Another theory is that they were developed there independently. Historians can only speculate on the origins of the Scottish clans’ piob mhor, or great Highland bagpipe, but the Highlanders were the ones to develop the instrument to its fullest extent and make it, both in peace and war, their national instrument. 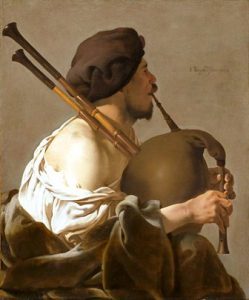 The original pipes in Scotland probably had, at the most, a single drone. The second drone was added to the pipes in the mid to late 1500s. The first written mention of the “Great Pipes” was in 1623 when a piper from Perth was prosecuted for playing on the Sabbath. The third drone, or the great drone, came into use early in the 1700s.
In the Lowlands of Scotland, pipers occupied well-defined positions as town pipers, performers for weddings, feasts and fairs. There was no recorded “master piper” nor were there any pipe schools. Lowland pipers played songs and dance music, as was expected by their audience. Over the mountains and glens, however, Highland pipers were strongly influenced by their background of the Celtic legends and the wild nature of the Highlands. The Highland piper occupied a high and honored position within the Clan system. To be a piper was sufficient and, if he could play well, nothing else would be asked of him.

As bagpipe use faded throughout most of Europe, a new form of music was starting in the Highlands. Beginning with Iain Odhar, who lived in the mid-1500s, the MacCrimmon family was responsible for elevating Highland pipe music to a new level, according to historians. This music is called piobaireachd (pronounced piobroch). This classical music is an art form which can compare to the music of any other country and most of it was composed 100 years before the piano and without written notation.

As a musical instrument of war, the Great Pipes of the Highlands were without equal, according to historians. The shrill and penetrating notes worked well in the roar and din of battle and pipes could be heard at distances up to 10 miles. Because of the importance of the bagpipes to any Highland army, they were classified as an instrument of war by the Loyalist government during the Highland uprising in the 1700s. After the defeat of Bonnie Prince Charlie in 1745, kilts and bagpipes were outlawed, the pipes being classified as instruments of war.