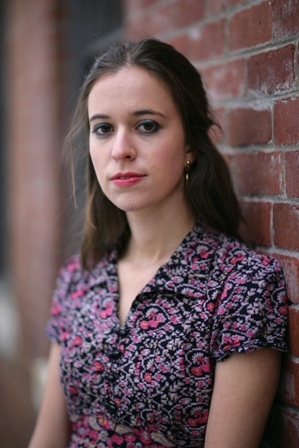 California-born Brittany Haas is widely regarded as one of the most influential fiddlers of her generation. Along with her sister, Natalie, she will be busy over the coming days with several performances at this year’s Celtic Colours International Festival.

What are your own roots?
Most of my heritage is German and English, but we have a little Scottish blood too and some Native American.  I grew up in California just like my mom. My dad is from the Midwest, and my grandparents were from Kansas and Ohio. My great great grandfather on my mother’s side was a fiddle player in Missouri.

What inspired you to start playing the fiddle?
I started playing fiddle because my best friend when I was four wanted to learn, and his mom (my mom’s best friend) decided we should go for lessons together. I had a really great teacher (and many other wonderful teachers later) and completely loved it from day one.

Are they the same reason you do it today?
The reasons I love playing fiddle have certainly grown since I first started. Then, it was just a fun thing to do. I like to think that something about music and the instrument in particular resonated with me though, and that’s what carried me through the last twenty-odd years of playing. The fiddle has come to be a part of me- an extension of my personality and a tool for self-expression and connection with other people (musicians and non-musicians).

How would you describe your sound & style today?
It’s hard to describe a music style without hearing it, but my biggest influences have been old-time fiddler Bruce Molsky, freestyle fiddler Darol Anger (who I’m performing with this week) and Scottish fiddler Alasdair Fraser. I also love Scandinavian music, and have played tons of bluegrass. I guess I am just trying to sound like all the vernacular styles I’ve studied and loved, while also sounding as much like me as possible. The sound of the fiddle resembles the sound of the human voice, and I think of my fiddle style as my voice, so I hope that it transmits the joy I feel when I play music.

What makes a good song?
A good song is a song that listeners can relate to, and that has a reason for existing. It’s more than melody and harmony and rhythm. It’s a story. And an instrumental piece is an open-ended story, that can mean something different depending on who’s performing it and the conditions of the performance. Everyone participates in the creation of the story- musicians and audience members alike.

What have been some career highlights?
Every musical bond that I’ve made is a career highlight. Getting to play with my biggest musical heroes is a huge thrill that will never wear off. Getting to play with my sister is the best. And I love playing at festivals especially because of all the cross-pollination of musical ideas between the various artists, and the feeling that everyone is in it together.

What can audiences expect at your Celtic Colours show this weekend?
Audiences can expect to see and hear us having a lot of fun with each other at our shows this weekend. This festival offers me and my collaborators the chance to bring our musical connections that have formed over the years at music camps and gatherings out in the open. It’s exciting for us to have the chance to create new music together, and even more exciting to share that with the Celtic Colours audiences.

What’s next on your creative agenda?
I have a couple projects with good friends that will be recording new CDs in the coming months. This means that I will be writing a lot of new music, something that I always want to do more of. I have a duo project with a fabulous Swedish fiddle player, Lena Jonsson, and a trio with two great American musicians- Jordan Tice (guitar) and Paul Kowert (bass, Punch Brothers).