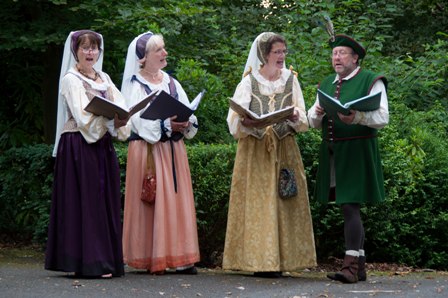 Bruces from all across the planet will converge in Dunfermline, Scotland this weekend! Maggie Mitchell, executive director of Dunfermline Delivers, gives us the details.

Who is expected to attend?
The event appeals to a wide range of people and we make sure it’s a free event so everyone can attend regardless of their income.  History enthusiasts will be attracted by one of the top jousting teams in Europe, the Knights Royal as well as the medieval battles. The event is very popular with the local community particularly families. British and international visitors also travel to the event.

What can they expect to experience?
A jousting tournament and there are medieval battles, blacksmiths and other medieval trades will be busy doing real work not to mention the medieval cooking – it’s a real sensory experience. All of this is against the backdrop of the beautiful Pittencrieff Park, known locally as ‘The Glen’ donated to the city by Andrew Carnegie, one of Dunfermline’s most famous sons. We have loads of attractions for families and this year we’ve introduced a children’s Highland Games for the first time – we’re looking forward to seeing them tossing their first giant caber, albeit a cardboard one! Then there are some great food and drink stalls selling the best Scottish produce – Aberdeen Angus beef burgers, venison burgers and visitors can try the local beer, called de Brus after Robert the Bruce, brewed at a microbrewery in Dunfermline.

Why is it an important event for the community there?
The event celebrates a historical hero who had strong links with Dunfermline and is buried at Dunfermline Abbey.  The history is a source of pride for the community and the festival is an important celebration of that heritage. For the local economy there are also significant economic benefits.

Will this be annual gathering?
The first Bruce Festival was in 2008 and each year it attracts more visitors so we see it going from strength to strength for years to come.

What can we be doing better?
There could be better links between festivals and events across Scotland and they could be linked to international promotion although this has improved considerably with EventScotland supporting events during Homecoming Scotland 2014. Articles such as these in Celtic Life are a brilliant way of spreading the international message.