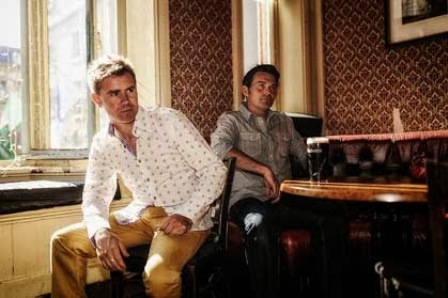 You might be used to seeing Neil Byrne and Ryan Kelly of Irish super-group Celtic Thunder on the big stage. Over the coming months, however, fans across North America can catch the duo in more intimate venues as they perform songs from their debut recording Acoustically Irish. Recently we caught up with the boys as they prepared to hit the road.

Why the decision to record and tour as a duo?
RK: It really just happened by chance! Neil and myself have always enjoyed performing together and, when we chatted about our musical influences and what we really liked to sing and play, it turned out we both had very similar ideas in that respect! From there, our acoustic show was born and we loved doing it that much, that it lead to our Billboard chart topping debut album last year, “Acoustically Irish” and now our biggest ever tour to date – including 12 dates in Canada and 40 in the US!

How is it different from the Celtic Thunder gig?
NB: At a Celtic Thunder show, we are performing to crowds of two thousand to fifteen thousand; from theaters to arenas to concert halls. Making that big jump, from small pubs and hotels back at home was a magical experience and as long as have the privilege it will never get old… even though I enjoy performing in general. I have to admit that I did miss the personal touch of the more intimate gig. The Byrne and Kelly shows have brought us back to that intimate vibe. I remember one of our loyal fans thanking us after she attended one of our shows for inviting her into our living room. I thought it was a nice way to describe the atmosphere at a Byrne and Kelly show. So to answer your question a Byrne and Kelly gig allows us give more of a personal touch.

How did you go about choosing the material for the recording?
RK: We both really just sat down with a blank canvas and thought “what would we like to hear from an album like this?” And that’s literally where it all came from. Some of the songs on there were songs we’d known were popular with fans from our live shows, but quite a few were also songs that we’d never performed live before – but will very much be part of this forthcoming summer tour!

What were the challenges involved in the recording?
NB: I suppose the primary challenge in recording has always been to give an honest performance and not get carried away with what you can record rather than what needs to be recorded. To be able to hear the performers personality is what sets us apart. To create something that is interesting to the ear and with a good positive vibe is what matters to me.

What were the rewards?
RK: For me, I think the greatest rewards always come in the responses from those who take the time to listen to anything we put out there. Whether it be through letter, online comment or talking to people at our gigs, just hearing how particular songs, or the album as a whole, has affected them in a certain way makes the whole process so worthwhile. We’re taking songs from our homeland, giving them our own, personal sound. It’s certainly rewarding to hear the final product and know that we’ve put our own stamp on something that we’ve been so close to for a long time.

What has the response been like so far?
NB: The response to our album has been quite overwhelming… I never expected in a million years for our debut album to hit the #1 position on the Billboard World Album Charts and number #1 on iTunes World Music Charts in Canada, Australia and the US. There are a lot of expats in all of these countries who love their Celtic music heritage but to also have a huge support from the natives of these countries tells us that we are creating a vibe that translates to music lovers in general.

Is your creative process more ‘inspirational’ or ‘perspiration’?
RK: I guess it’s always a bit of both!! I believe there’s always going to be hard work involved in the creative process, but we’ve been very lucky in that, from the moment we began both the touring and creative process as “Byrne and Kelly”, we’ve enjoyed every single minute of it and I do believe that shows in our performances and on our album as well.

What makes a good song?
NB: Everyone has there own ideas on what a good song is; a song that makes you feel good; a song you will listen to over and over again; a song that moves you emotionally. A beautiful melody or super cool hook lines all factor into making a good song. Then something completely abstract can win you over at the same time. I remember my dad telling me that if a song passes the whistle test you have given yourself a better chance of writing a hit track.. Meaning, if your next door neighbor is whistling the melody to your song while sweeping the porch unknowns to themselves, that’s a good sign.

What can audiences expect at the shows?
RK: We really just hope that people coming out at the end of our gigs will feel like they’ve just spent two and a half hours sitting in our local pub in Ireland listening to us sing and play the songs we love to perform, rather than actually being in the middle of somewhere in Canada! To me, that’s the sign that things have gone well! 🙂

Is this a ‘one-off’ tour, or will this be a regular gig?
NB: As long as people like what we do and want to see us play live we will keep coming back.  We have made so many great friends in a wonderful fan base and its always a special event seeing those familiar and new faces at our acoustic shows. We love what we do and feel that “Byrne & Kelly” are only getting started

What happens after this tour?
RK: We sleep! We recharge the batteries and we start planning for more recording and touring! There’s another album in the pipeline and we just love touring this gig. So, more of the same I hope!