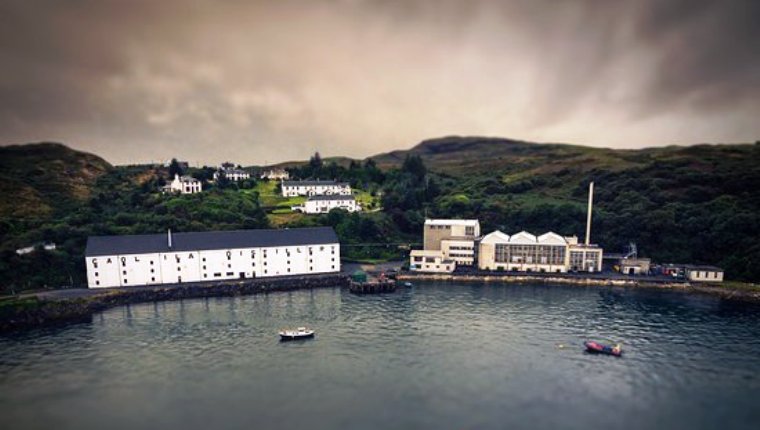 Scotland’s Caol Ila distillery is named for the body of water it gazes across, the majestic ‘Sound of Islay’ – a narrow but turbulent ribbon of water separating the islands of Islay and Jura.

The distillery is built almost precariously into the rocks of a steep embankment on a tiny bay. As with all of Islay’s distilleries, Caol Ila had to be supplied exclusively by sea until the middle of the 2oth century. Ships full of barley and oak barrels from the mainland sought a safe anchor from the tempestuous North Atlantic sea. They would return to the mainland with casks of the peaty, smoky, single malt whisky which Islay is still famous for. Then, as today, the vast majority of these casks were destined for blending. 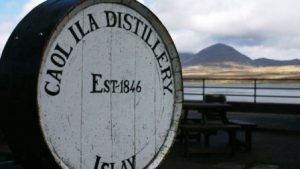 Caol Ila – pronounced “cul-ee-lah” – is a facility full of contradictions. It is, by some margin, the largest of Islay’s 8 active distilleries, but it also produces one of Scotland’s most dependable whiskies. Whisky Advocate Magazine refers to the distillery as ‘Mr. Consistent’ – a reflection on how few poor bottlings and casks of the whisky are in the marketplace. Is the size of the distillery and its efficiencies counterintuitively an asset? Perhaps, but these factors also make it one of the least interesting distilleries to visit on Islay, with one crucial footnote; the view from the Still Room at Caol Ila is unrivalled by any other distillery in Scotland, and possibly the world.

The Still Room’s floor-to-ceiling windows offer a panoramic view across the Sound of Islay to the dramatic Isle of Jura beyond. Whales, dolphins and sea otters all frolic in the waters out front, while the sun and clouds take turns revealing and obscuring the wilds of Jura.

In addition to the distilleries, there is much to see on Islay. One would be hard pressed, in fact, to see all eight of the island’s active distilleries in three or four days. I am torn when asked to recommend which distilleries visitors should see; in a perfect world that would be all of them. Islay is, after all, Mecca for disciples of malt whisky gospel. But when a distillery needs to be cut, Coal Ila is often the first on the chopping block. Other than the view, the distillery isn’t all that interesting compared with its neighbours.

Although its output is two and three times that of the next largest distilleries, almost none of Caol Ila’s production is matured on the island. More than 99 per cent of its whisky matures in warehouses on the mainland.

The vast majority of Caol Ila’s production is earmarked for blends – most importantly the world’s second bestselling blended scotch whisky, Johnny Walker Black Label. While less than 5 per cent of the distillery’s production is set aside for bottling as single malt by the owners, Diageo, a quirk of the Scotch whisky industry’s supply chains has made Caol Ila the most widely available Islay single malt from independent bottlers. Whisky companies trade casks with one another to add complexity to their blends. Some of these casks find their way into the hands of independent bottlers; Gordon MacPhail, the Scotch Malt Whisky Society, Port Askaig, and others regularly bottle excellent single cask and small-batch bottlings of Caol Ila. 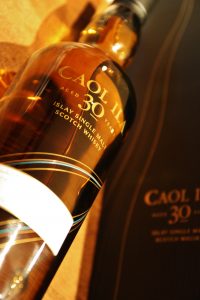 If you make the trek to Islay (and you should), and have the time, be sure to pop by Caol Ila to admire the view. Whether on tour from the Still Room or from the pier in front of the distillery, the views of the Sound of Islay and Jura – regardless of the weather – will take your breath away. More importantly, try every bottling of the whisky you can find; few, if any, of ‘Mr. Consistent’ are likely to disappoint!

Johnny Walker Black Label: This, like Guinness, is often the best of a lot of bad choices in most venues. The whisky is dry, smoky and malty; not mind-blowing, but very drinkable. $55

Finlaggan Eilean Mor Islay Single Malt: Named for the seat of the Lords of the Isles on Islay, this mystery malt is big, malty and classic Caol Ila…even if they don’t explicitly call it that! $60

Port Askaig 19 Year: A stunning older Caol Ila, delicate and tropical with the profile of a much older whisky. A bargain at any price! $195

Caol Ila 30 Year: Big, but rounded nicely with loads of fruit and a delicate peaty profile reminiscent of Port Ellen. $800