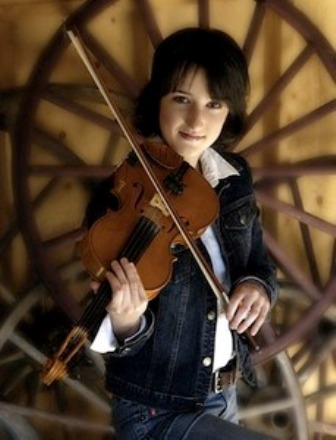 Kimberley Fraser was born on Cape Breton Island, and nurtured within its rich musical heritage. She first began to impress audiences at the age of three with her step-dancing talents. Soon after that she took up both the fiddle and the piano. Though still in her 20s, Kimberley has already toured the world in support of her three critically acclaimed recordings – Heart Behind the Bow (2000) and Falling On New Ground (2006), which won the East Coast Music Award for best Roots/Traditional Album of the Year.

What is your own background/ethnic heritage?
My grandmother’s people come from Barra and my grandfathers’ people are of French descent. Fougere is actually my family name- my grandfather’s people were Fougeres from Richmond County in Cape Breton. When his people moved to the Northside area it was apparently easier to find work with an anglicized name so it was changed to Fraser.

What inspired you to start playing music?

My sister was a step dancer so I grew up hearing lots of fiddle music through recordings in the house. I went to all of her concerts. Jean MacNeil, the mother of the Barra MacNeils, was her teacher so I always heard the Barras and other fantastic players like fiddler Carl MacKenzie and pianist Doug MacPhee at those concerts at a very young age and loved it. I began to dance at age 2. When I was about 5 years old, I saw a Ashley MacIsaac on the television show ‘Up Home Tonight’ and fell in love with him (I saw that was left handed like me). My parents taped the episode and I watched it over and over again and pretended to dance and play along with him. I was desperate for a fiddle and began lessons at age 6.

How have you grown as a player over the years?
I’ve been extremely fortunate to have worked with some of the best musicians in traditional/roots music over the years at various festivals, workshops and especially during my time as a student at Berklee College of Music in Boston. I will always be a Cape Breton fiddler but being immersed in other fiddle genres like American Old time, Texas Swing, Bluegrass, Jazz and even Irish fiddling has definitely broadened my musical horizons. Exposure to and immersion in other styles of music has given me so many tools to work with in arranging melody and harmony.

What have been some career highlights?
I have been lucky to have had the opportunity to perform at major festivals like the Tonder festival in Denmark, the Celtic Connections festival in Glasgow and the Milwaukee Irish Festival and teach at some great music camps like the American Festival of Fiddle Tunes in Port Townsend, WA and the Swannanoa Gathering in Asheville, NC. However my biggest career highlight would be my trip to Afghanistan in May 2008 when I had the honour of performing for NATO troops. That was an experience beyond words.

What makes a good song?
I think the best tunes have the simplest melodies. So many tunes have stood the test of time for this reason.

What attracted you to Celtic music?
Growing up in Cape Breton, of course, would have a lot to do with that! But aside from that, it is truly soulful music. Pipe music to me is especially gutsy.

Is enough being done to promote Celtic culture today?
In Cape Breton I see more and more young people getting involved in playing Cape Breton music. But I think it is particularly exciting to see how many young people are getting involved with Gaelic language. Awareness of the language seems to have grown significantly over the past few years and that seems to have coincided with the creation of the government Office of Gaelic Affairs in Antigonish and the efforts of places like the Gaelic College of Celtic Arts and Crafts along with numerous other places in Nova Scotia that offer courses in Gaelic language.

What could we be doing better?
I believe we need to continue to give young people a balanced approached to learning music and language. In Cape Breton we are very fortunate to have institutions like the Gaelic College, the Judique Interpretive Center, Cape Breton University with the Beaton Institute Archives and the Highland Village in Iona.

Are you excited to be involved with Celtic Colours International Festival again this year?
I’m always honoured to be a part of Celtic Colours. It’s always a fantastic opportunity to meet new artists and form new musical relationships as well as connect with other venues and festivals.