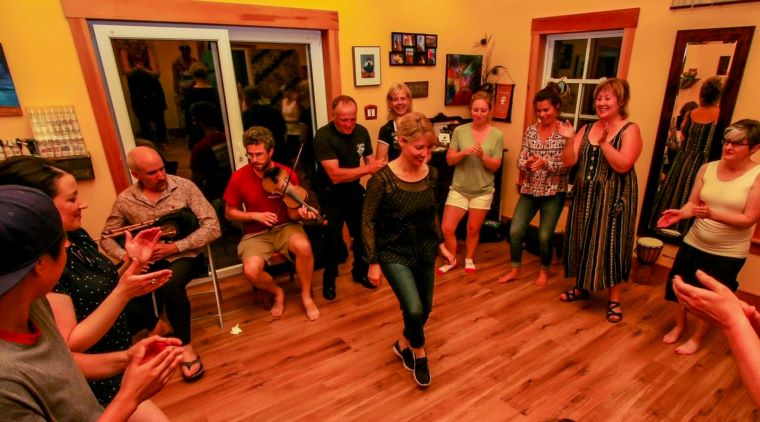 Fiddler and dancer Melody Cameron performs at this years Celtic Colours International Festival, which begins today in Cape Breton. Recently we spoke with her about her passion for her profession.

What is your own background?
I was raised in River Bourgeois in Richmond County. I grew up surrounded by music and dance. My grandfather on my father’s side was a fiddler and piper and my grandmother on my father’s side loved to dance in the square sets. Their fondness for the Cape Breton music and dance was passed on to my father, who was a good singer and dancer. My grandparents on my mother’s side loved to have people drop in and visit and share songs, tunes or stories. I have a lot of good memories from visits to their house over the years. I learned my first step dance steps from my father when I was 4 years old. Later, I took some lessons from Gladys Cote when I was 7 or 8 years old, and then started dance lessons from Linda MacMullin Landry when I was around 10. For many years, I danced synchronized step dance routines with my younger sister Kelly.  We started performing these step dance routines at Cape Breton concerts and outdoor festivals when I was 11 or 12. I began teaching step dance when I was 15. I started playing fiddle when I was 13 years old, taking my first lessons from Howie MacDonald and Kinnon Beaton. I went on to pick up tips and tunes from Stephanie Wills, who was a great piano player and fiddler.

Where do you currently reside?
I now live in Mabou, Cape Breton. Mabou is a community that is rich in this culture of music and dance. I had a lot of good times here through my teen years. My sister Kelly and I often went to the local square dances in West Mabou Hall or Glencoe Mills and we performed at concerts in the Mabou Hall and at Mabou Ceilidh’s outdoor concerts. I met my husband, Derrick on one of the summer weekends that I came to West Mabou to attend the dance. I later moved to Mabou to start a new job in 1992. I married Derrick in 1994 and we built a bungalow on his family’s farm property in West Mabou. We have been there ever since.

What kind of fiddle do you play?
For some of my early fiddling years, I played my grandfather’s old fiddle. I had found it in a bag in my grandparents’ basement. It was in pieces because it had been sat on at a house party. We took it to a neighbour who used to do fiddle repair and he put it back together for me. It had a label inside, so I know it was built in the 1930’s, but the name on the label was unclear. About 20 years ago, I bought the fiddle that I still use regularly today. It is a Stradivarius copy that I bought from a local instrument dealer. There is no label or markings inside.  It’s nothing fancy, but it has been a good instrument. My grandfather’s fiddle has now been retired to a cabinet in our kitchen. 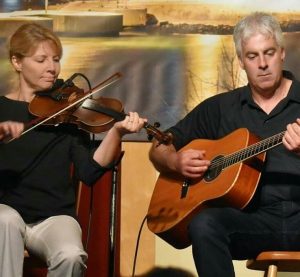 Are you a traditional fiddler in terms of style & sound?
I like the older sound and style, so yes…that is what I strive for.

Who were your influences?
I have had so many people that influenced me over the years. Different people influenced me in different ways. I loved dancing in the square sets with some of the older dancers like Donald Roddie MacDonald, Benedict MacDonald or Francis Beaton.  I loved their timing and drive and how they executed their steps. Absorbing that not only benefits your dancing, it also benefits your playing.  I like the sound of the older fiddle style.  We used to have sessions at our house and local players like Kenneth Joseph MacDonald, Willie Kennedy and Fr. Angus Morris would come regularly.  I also learned from listening to players like Howie MacDonald and Jerry Holland. I think you try to pick out things you like from different players and blend it into what you want your sound to be. It is an ongoing process.

What makes a good tune?
That question is more complicated than you think. A catchy melody is a big part of it.

Where are some of the places you performed and taught at over the years?
Early on, I performed and taught with my sister Kelly at venues throughout Nova Scotia, Prince Edward Island and Western Newfoundland. Through the 1980’s, we appeared four times on ATV television’s “Up Home Tonight” and were filmed for a BBC documentary “Down Home”. Towards the late 1980’s, we were part of the group “Highland Classic”. Other members of that group included Natalie MacMaster, Ashley MacIsaac, Wendy MacIsaac, Rodney MacDonald, Stephanie Wills and Jackie Dunn. In the spring of 1998, I had the opportunity to work as a choreographer for The Rankins, one of Canada’s foremost folk groups and years later, in 2005, Kelly and I danced on The Rankin Sisters’ televised Christmas special, “Home for Christmas” which aired on Canada’s Bravo! network. I also perform regularly with my husband Derrick at dances, pubs, concerts and festivals throughout Cape Breton Island. We have also done venues in the New England States and have taught workshops and performed at the North Atlantic Fiddle Convention in Aberdeen, Scotland in 2010 and at the Barga School of Scots Music, Song and Dance in Italy in 2016 and 2017. Another recent event was a trip to Quebec City to teach dance workshops with fellow instructors Nic Gareiss, Normand Legault, Michel Bordeleau (foot tapping) and Pierre Chartrand for Danse traditionnelle Québec in the fall of 2018.

What are the reasons you continue to play and dance today?
Being part of this cultural community has given me so much! I have met so many good people through it.

From your perspective, are young people still interested in traditional fiddle and dance?
We do have young people that are interested in this form of music and dance and in the Gaelic language and song traditions.  It is great to see them attending square dances and taking part in events like community concerts and milling frolics. That being said, there are still a lot of younger people in our communities that don’t understand or take part in these traditions or events. I would certainly like to see more of them get involved. We need to foster our next generations of dancers, musicians and singers and we also need to work to maintain a knowledgeable local audience.

Is enough being done to preserve and promote Celtic culture generally?
There is good work being done to preserve and grow our Gaelic culture by institutions and organizations like Colaisde na Gàidhlig / The Gaelic College, the Celtic Music Interpretive Centre, the Highland Village Museum and Celtic Colours International Festival. Also, there is a lot of great work being done by smaller, volunteer community groups and féis organizations that offer language immersion, music and dance workshops and mentoring opportunities. Derrick and I served as volunteers on a Mabou based féis organization for a number of years. Many of these organizations get some support from Nova Scotia Gaelic Affairs. All age square dances also play a key role in the preservation and promotion of Cape Breton’s traditional music and dance by giving young fiddlers a chance to play a square set or dancers a place to use the steps they are learning in a square set and maybe do a short solo dance when the fiddler plays for step dancers.
How can that be improved?
One of the things that we think would help is to increase the interaction between the musicians, dancers and Gaelic speakers in our communities and what goes on in the classrooms of our schools. It is already happening, but it would be nice to look for opportunities to expand on this type of interaction.

What are your fiddling and dancing plans for 2020?
I am very excited about an upcoming trip to Ireland. I have been invited by Irish dancer Edwina Guckian to perform and teach at the Leitrim Dance Project in April 2020. I will also be running my Mabou School of Cape Breton Step Dance again in 2020. I started this school in the summer of 2017. It features some of Cape Breton’s finest instructors and a series of presentations focusing on step dance related topics. The goals for the school are not only to offer high quality dance instruction, but also to give a well rounded Mabou, Cape Breton experience. And in 2020, we will continue to play at the local venues that we’ve been performing at for years. We enjoy it. Aside from that, my husband Derrick and I are currently board members of West Mabou Development Association. This non-profit association hosts one of Cape Breton’s longest running square dances, The West Mabou Family Dance, which has been offering weekly square dances for all ages since 1988. We also helped establish Dance Dialects.  This event is hosted by West Mabou Development Association in association with Celtic Colours International Festival and is held in October in West Mabou Hall. Dance Dialects is an exploration of different percussive dance styles. It features discussion and performances by local and visiting dancers and allows for some audience participation. Dance Dialects was held in 2017 and 2018 and is scheduled for October 16th of 2019. Some of Dance Dialects past guests include Edwina Guckian, Dominic Desrochers, Mary Frances MacMaster Leahy, Emma O’Sullivan and Mac Morin.  We hope to keep Dance Dialects happening in 2020 and beyond.