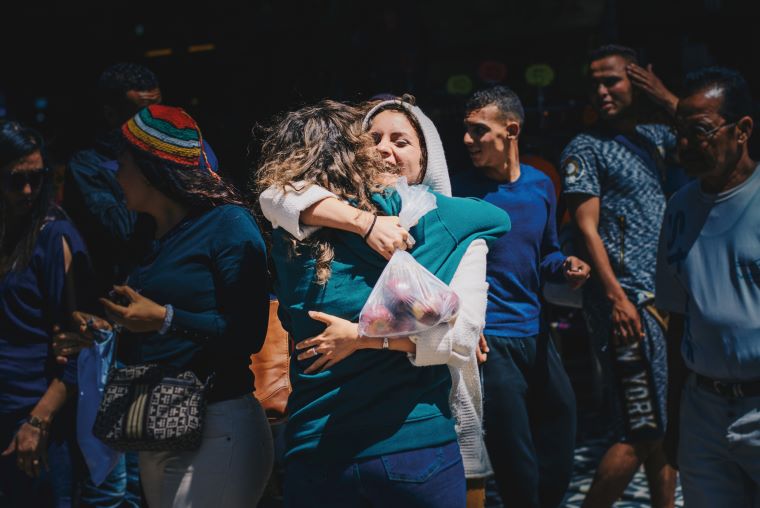 In his 1690 work, An Essay Concerning Human Understanding, English philosopher John Locke argued that it is our memories that define us. Salvador Dali’s 1931 surrealist painting, Persistence of Memory – with its famous melting clocks – challenges us to consider the meaning and illusory nature of time. While many of us may not consciously think about who we are, nor ponder time beyond practical applications, it has not escaped the notice of Laura Hudson Mackay, a photographic artist based in South West Scotland. Some of her earliest memories, and a fascination with time, have shaped who she is and brought direction and focus to her art.

I caught up with Hudson Mackay at The Stove – the premises of an artist-led collective in Dumfries. With auburn hair hinting at a distant Celtic ancestry, her large, hazel eyes sparkled as she recounted fond memories of her grandfather.

“I loved spending time with him. When I was seven years old he made me a wooden clock and taught me how to tell the time. When I was in my teens he asked me for ‘a little box of time’. Unbeknown to his family he was ill and died soon after. My fascination and exploration of time began with him.”

That interest grew alongside a passion for storytelling – something she attributes to her mother. 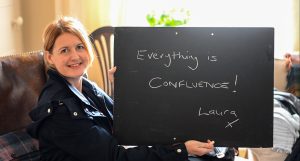 “She inspired my love of fairytales, folklore and all things otherworldly. I would sit bewitched as she told me stories of secret forests where castles stood, worlds deep under the sea and magical places far, far away.”

In her mid-twenties, Hudson Mackay visited the Isle of Iona – a trip that would shape her future life. While there, she felt a timeless spirituality – one that preceded St Columba and Iona’s Christian heritage – awakening within her a fascination with the Celts, their stories and their culture. It was here, by the sea, that her boyfriend proposed marriage. Five years later and married, they returned to Iona, where – with her first camera in hand – she began to understand that the essence of great photography is not solely to create a record, but also to capture a sense of something beyond what the eye can see. This would lead to an Advanced Diploma in Illustrative Photography from Glasgow Metropolitan College in 2006, a Diploma with Distinction in Art History from London Art College in 2013, and membership of the Royal Photographic Society.

In 2010, Hudson Mackay and her husband visited Morocco, a world of vibrant colours, music, sounds and storytelling steeped in Arabic traditions and culture. A melting pot between Europe and Africa, it was a far cry from the peace and tranquillity of rural, South West Scotland. Jemaa El-Fnaa is the main square in Marrakech where the hlaykia – traditional storytellers – have been reciting tales for a thousand years. Captivated by its vigour, the couple built a property in Marrakech. Now, with a base in Scotland and one in Morocco, Hudson Mackay embraces two cultures with her love of photography and stories, bridging the two.

It was during her first international exhibition in Marrakech in 2016 that she met Mehdi El Ghaly, a traditional Moroccan storyteller. His enthusiasm was intoxicating; like Celtic storytellers of old, El Ghaly had memorized tales handed down through generations of Moroccan hlaykia, bringing them to life again and mesmerizing listeners with each retelling.

In 2017, an art and craft development organization based in Dumfries and Galloway called Upland sought expressions of interest to participate in a program encouraging international development between artists. 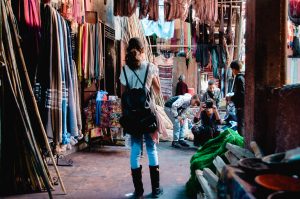 Hudson Mackay proposed a collaborative project between El Ghaly, Houssain Belabbes – a Morrocan photographer that she had come to know – and herself. It was an ambitious project based on the premise that there are similarities to be found in Celtic and Arabian stories. Titled Confluence, the proposal would test this premise, and identify and document any such stories before they are lost through the passage of time. The creative use of photography would enhance those stories, helping to give them permanence. Her bid was successful and Confluence was born. She sought out a Celtic storyteller to complete her team and enlisted Anne Errington, whose father also happened to be a passionate Arabist.

Headed by Hudson Mackay, the four-person Confluence team began the process of gathering stories. Initially using social media to communicate, they quickly inspired one another with their stories and images.

Thus, the group set about identifying those thematic similarities. From an initial list of forty-two they whittled it down to seven specific concepts that could be considered as common to the tales of both cultures; Water, Happiness, The No. 3, Old, Time, Silence and Money. After this, the group held public meetings in Scotland and Morocco, spreading stories, gathering more stories, making images and distributing information about the project in both English and Darija (Moroccan Arabic.)

In 2017, Hudson Mackay was appointed Artist in Residence at Scotland’s Wigtown Book Festival, and from that grew the idea of a book to celebrate Confluence. With Celtic tales, including The Kelpie and The Fiddlers of Strathspey, along with Arabian stories such as The Barber and the Merchant and The Princess and the Donkey, the 190-page hardcover book includes twenty-nine stories from Celtic and Arabic cultures spread across all seven themes. The stories are accompanied by beautiful images in monochrome and colour, many with a distinctly timeless quality. Launched in Wigtown in May 2018 – and followed by a second launch at the British Ambassador’s residence in Rabat later the same year – the book is testament to the success of Confluence. 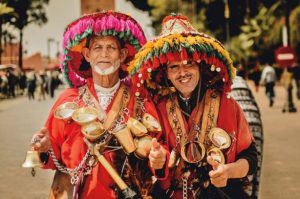 The work is only part of the story, however; in the true meaning of Confluence there is now a fascinating flow of stories, and an exciting mingling of ideas, emanating from both Scotland and Morocco. Cultural barriers are being overcome, and shared

workshops in storytelling and photography – as well as art exhibitions and installations – have been taking place in both countries, with more planned through 2019 and 2020. In addition, the Australian Ambassador to Morocco has commissioned a project to explore links between the two nations and similarly to produce a book.

Each year, Hudson Mackay embarks on a journey to explore cultural overlaps between Celtic lands and other nations. Two years ago she toured the coastline of Brittany, Asturias and Galicia, and last year she travelled through Denmark, Sweden and Norway. As a result of her efforts, Scandic storytellers have engaged with the project and events and workshops have been organized for the Shetland Islands, Norway and Denmark. From a small idea inspired by memories and time Confluence has gone global.

Through all of this Hudson Mackay never forgot her grandfather’s request, and two years ago she finally created his ‘little box of time’ which contains a collection of photography, other time-related items, and his old pocket watch. It may have taken her three decades and a soul-searching journey to create it but – as Einstein is purported to have said – “time is just an illusion.”