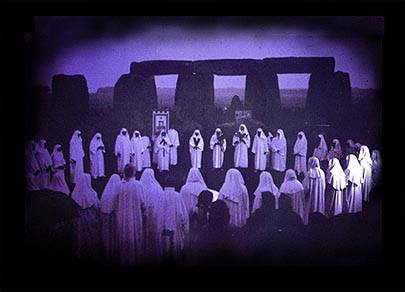 The Druids were an ancient order of Celtic priests in the societies of Western Europe, Britain and Ireland. The Celtic Druids served their communities by combining the duties of seer, priest, poet, philosopher, historian, scholar, teacher, doctor, astronomer and astrologer. The Celts had developed a highly sophisticated religious system, with three divisions of men who were held in exceptional honor; the lowest division was called the Ovates, the second division was called the Bards and then the Druids. The Ovates were the healers and seers; the bards memorized the songs, poems, and stories of the tribe (historians); while the druids taught moral philosophy and were experts in the workings of natural science.

The Celtic Druids were advisers to the rulers of that time, acted as judges in the event of disputes, supervised executions and even controlled the legal system. They were held in such respect that if they intervened between two armies they could stop the battle. The Druid priests and priestesses acted as mediums through which the spirits could be summoned and heard, with rituals throughout the history of the Celtic Druids being enacted in sacred groves of oak trees and circles of standing stones.

The first surviving and fullest account of the druids and their religion is that given by Julius Caesar in his Commentarii de Bello Gallico, book VI, written in Gaul in 59-51 BC. Overall, not much can be said of the druids with assurance as the sources of information about them are limited. However they continued to feature prominently in later sources of Irish myth and literature. Thus, the history of the Celtic Druids presents many obscurities and our main literary sources date back to the 2nd century BC with Pliny and The Commentaries of Caesar.

“The principal point of their doctrine”, Caesar wrote, “is that the soul does not die and that after death it passes from one body into another. With regard to their actual course of studies, the main object of all education is, in their opinion, to imbue their scholars with a firm belief in the indestructibility of the human soul, which, according to their belief, merely passes at death from one tenement to another; for by such doctrine alone, they say, which robs death of all its terrors, can the highest form of human courage be developed. Subsidiary to the teachings of this main principle, they hold various lectures and discussions on astronomy, on the extent and geographical distribution of the globe, on the different branches of natural philosophy, and on many problems connected with religion”.

After the first century BC the continental druids disappeared entirely and were referred to only on very rare occasions. However, there is some evidence that the druids of Ireland survived into the mid- to late-seventh century.