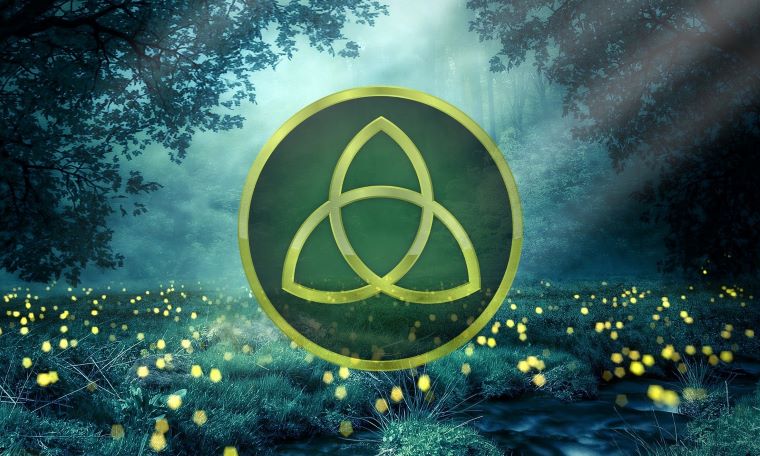 Ireland is home to some of the most intricate and interesting art known in human history. Attributed to the ancient Celtic people, it is mysterious and rich in meaning with sign, symbol, and metaphor. Due to Ireland’s embrace of Christianity and Catholicism centuries ago, it is not surprising that many of these symbols were given new and deeper religious significance, used by the missionary saints as handy catechesis tools to illustrate Christian doctrine for the pagan inhabitants of the island. In modern times, much of this interesting symbolism is commonly found in Irish jewelry. Just as Christianity gave new meaning to these ancient and formerly pagan symbols, many of these still represent elements of Christian faith to those who wear them. As a result, today Irish jewelry is internationally popular and is worn by more than just people of Irish or Celtic decent.

Trinity Knot
The Trinity Knot (also known as the triquetra) is an ancient Celtic symbol comprised of one interconnected line with three distinct ends. Once having pagan meaning, the symbol was adopted by Christians as a good illustration of the doctrine of the Holy Trinity. The symbol received its common name, the Trinity Knot, and came to demonstrate the three-ness in one-ness of the Father, Son, and Holy Spirit.  Sometimes the Trinity Knot is also circumscribed by a circle symbolizing eternity. This symbol often was used as an architectural adornment in ancient monasteries and is today commonly found in necklaces, rings, bracelets, and other Catholic jewelry pieces.

Celtic Knot
The Trinity Knot is one of the many varieties of Celtic knotwork –  stylized and woven lines and knots used extensively for artistic decoration.  These lines and knots symbolized the interconnectedness of all life and is often found with depictions of animals, plants, or humans.  Celtic knots were adapted by Christians and used in monuments, such as stone high crosses, and the beautiful ornamentation of illuminated manuscripts (Sacred Scripture) painted by the Irish monks.  Taken from its pagan earth-centric meaning, they served a new purpose in the illustration of the eternal, Christian God as the author of all creation. 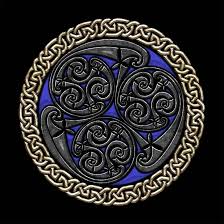 Celtic Spiral
Similar to the Celtic knot, the Celtic spiral stands for continuous growth and unity and oneness of spirit.  The gaps between the spirals stand for the gaps between life, death and rebirth.  More specifically, the symbol also stands for eternal life.  The roots of this symbol are ancient. The spiral may be formed from single, double, triple or quadruple swirls. When Christianity came to the land, the spiral was adopted by the island’s Christian monks as a decorative motif in their distinctive Celtic-inspired illuminated manuscripts and also symbolized eternal life or the doctrine of the Holy Trinity.

St. Brigid’s Cross
St. Brigid is the patroness of Ireland and as such her cross is a symbol of Irish Christian heritage.  It comprises a woven square in the center and four radials tied at the ends. The legend behind this popular cross is that St. Brigid was making the shape of a cross from a bunch of rushes. Her chieftain father, who in some accounts lay dying, saw her making the cross and was miraculously converted to the Christian faith.  The St. Brigid Cross has remained special for Irish Christians through the centuries, especially around the saint’s feast day when it is displayed in her honor.

Celtic Cross
In Ireland it is a popular legend that the Christian Cross was introduced by Saint Patrick.  The distinctive Celtic Cross is unusually mounted on a circle, a symbol of the sun and the circle of life, and often featuring Celtic knotwork or other symbolism.  It has often been claimed that Saint Patrick combined this symbol of Christianity with a circle to give the pagans an idea of the importance of the Cross of Christ by linking it with the idea of the life-giving properties of the sun.  Other interpretations claim that placing the cross on top of the circle represents Christ’s supremacy over the pagan sun, symbolizing the God-man’s death and resurrection, therefore His power over creation. These Celtic symbols received new meaning when Christianity spread through the island. The Celtic Cross is now the main symbol of Irish Christianity.

Tree of Life
The Tree of Life is another common Celtic motif used in ancient Ireland that illustrates the interconnectedness of all forms of creation.  The tree was a source of basic sustenance, it provided food, shelter, and fuel.  Because of this it was also believed that trees had other spiritual mystical properties. However the tree is also an important symbol of Christianity. The Tree of Life is a Christian symbol representing eternal life through Christ.  In the biblical story of creation, God planted the Tree of Life in the Garden of Eden, from which humans were banned after the Fall.  The Book of Revelation recounts how the sacrifice of Christ, made on the wood of a tree, restored access to the Tree of Life.

Shamrock
One of the most well-known legends of Irish Christianity is how St. Patrick used the shamrock during his missionary work to illustrate the Three-Divine-Persons-yet-One-God doctrine of the Holy Trinity. While other symbols already existed and were “baptized” by the saints and given new meaning that pointed to the Christian God, the shamrock became famous because of Saint Patrick. Irish jewelry is not only beautiful but also rich in meaning.  It is a wonderful way to illustrate how man, unaided by Divine Revelation, picks up on, or can sense and know only dimly, the eternal and mysterious aspects of life and creation. So that when Divine Revelation is taught, such as by the Irish missionary saints, what is incomplete and imperfect is given new, deeper, and more perfect meaning.  For Christians, Irish symbolism illustrates the Light of Christ and the truth of Christianity.