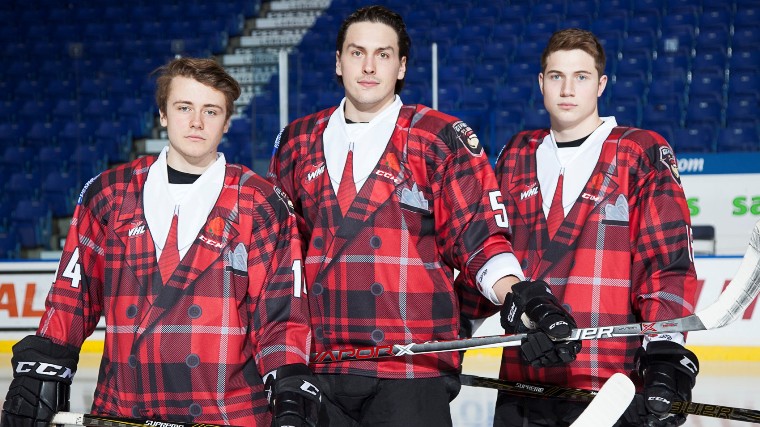 A dig into the history of the National Hockey League reveals that the NHL’s ‘Celtic Era’ came and went anything but quietly. From 1919 to 2010, 30 professional ice hockey players born in the Celtic nations of Scotland, Ireland and Wales left quite a loud impression on the North American game.

The first Celtic nation-born player in the NHL was Glasgow, Scotland’s George Carey, a right winger who won the Stanley Cup with the Quebec Bulldogs. He played from 1919 to 1924 for Quebec, the Hamilton Tigers and Toronto St. Patricks. The last native Celt in the NHL was first-pick-overall Owen Nolan, born in Belfast, Ireland. Between 1990 and 2010, Nolan skated in 1,200 NHL games with teams in Quebec, Colorado, San Jose, Toronto, Phoenix, Calgary and Minnesota.

A breakdown of the birthplaces of the 30 Celtic hockey players shows that 21 came from Scotland, six from Ireland and three from Wales. All played at least one game at the world’s highest level of professional hockey.  Impressively, over a 90-year span these three small but mighty nations bore nine Stanley Cup winners, one Hockey Hall of Famer, a league MVP, ten All Stars, two Vezina trophies for best goaltender, and a Calder trophy for top rookie. 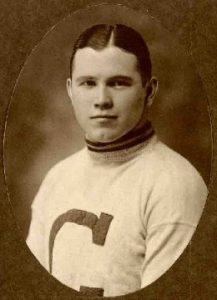 Goaltender Charlie Gardiner, who in 1911 at seven years old moved from Edinburgh to Winnipeg, is the undisputed champ of Celtic impact players. From 1927 to 1935, Charlie won two Vezina trophies with “the goalless wonders” the Chicago Black Hawks, and was named to four All-Star teams. In 1934, he captained his team to a Stanley Cup win, the only NHL goaltender ever to do so. With a 2.02 lifetime Goals Against Average (GAA), and 1.48 GAA in the playoffs, Gardiner was posthumously inducted into the Hockey Hall of Fame in 1945. Today, the Gardiner Conference in Britain’s Elite Ice Hockey League is proudly named after him.

In Winnipeg, Gardiner was friends with another great Celtic NHL goaltender, Wilf Cude, twice an All Star and one of three NHL players born in Wales. From 1930 to 1941 he backstopped Philadelphia, Chicago, Boston and Montreal teams, starring in 1934 with Detroit Red Wings, but losing the Stanley Cup final to Gardiner’s Black Hawks. During the cash-strapped 1931/32 season, Cude was the NHL’s official ‘spare goalie’, on loan to any team whose goaltender got hurt.

Three out of the six players born in Ireland who played in the NHL are from Belfast, including the Detroit’s James Alexander McFadden who grew up in Carman, Manitoba. Jim was the 1948 NHL Rookie of the Year, won the 1950 Stanley Cup with Detroit, and appeared in the 1950 All Star Game.

Hockey in North America being all about nicknames, the best Celtic-era NHL nickname goes to “The Glasgow Gobbler” Andy Aitkenhead, a goaltender and major player for the New York Rangers in his rookie season, and the team’s 1933 Stanley Cup.

Honourable mention goes to Adam “The Flying Scotsman” Brown, born in 1920 in Johnstone, and winner of the 1943 Cup with Detroit.

The most un-Celtic of nicknames went to Edinburgh-born Tommy “Cowboy” Anderson who won the 1942 Hart Memorial Trophy with the New York Americans as the league’s most valuable player. As the first to win the trophy while on a team that missed the playoffs, ‘Cowboy’ remains one of three NHL MVP-winners not to be in The Hockey Hall of Fame. 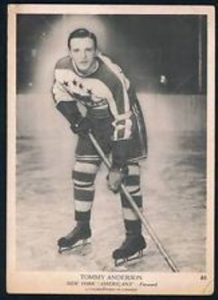 The nation of Wales can claim bragging rights to the biggest Celtic impact on NHL coaching, with 14-year player and eight-year coach Jack “Tex” Evans. Born in Morriston in 1928, Evans grew up in Drumheller, Alberta, playing for the New York Rangers and 1961 Stanley Cup winning Chicago Blackhawks. He then coached eight seasons behind the bench with the California Golden Seals, Cleveland Barons, and Hartford Whalers up to 1987.

Rest assured the NHL ‘Celtic era’ has not yet completely disappeared. One time Boston Bruin defenseman and assistant coach Gordie Clark, born in Glasgow in 1952, is today the Director of Player Personnel for the New York Rangers. Clark, who moved to Saint John, New Brunswick, when he was a little over two, says he didn’t pick up hockey right away, but credits hard-nosed Celtic-style Scottish soccer with readying him for battles on the North American ice.

“Soccer was my first love. That’s all we played,” he said. “Across the street was a skating rink, so I did skate. But then, around 12 or 13, hockey clicked in, and kind of took over everything. The Scots played a very aggressive national game of soccer, and I think we brought it to the rink. It was already in our blood.

“The theory of the game of soccer is so similar that my Dad, who knew nothing of hockey, understood right from the beginning. Actually, when I first got interested in coaching, I used to get all my drills from my dad’s soccer books.

“And, no doubt, we probably brought a few battles over from the old days on the curling rink too.”