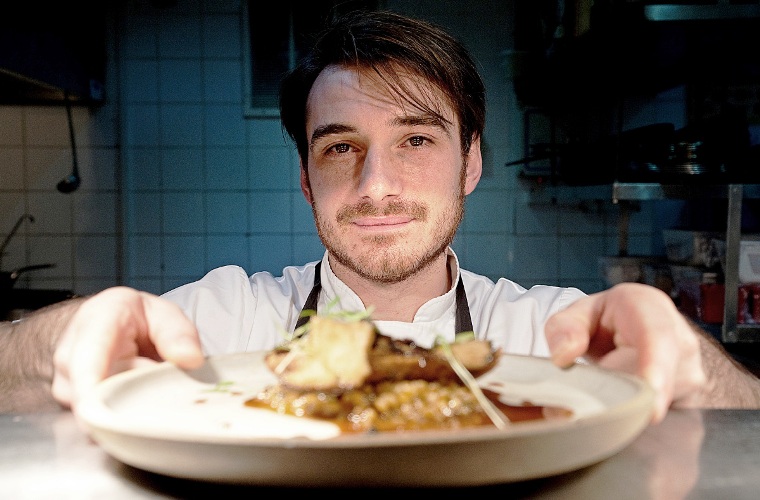 For Scottish Chef Chris Charalambous, the grocery aisle starts in the wild

“We go out foraging in the park,” shares Scottish Chef Chris Charalambous by phone from his home in Glasgow. “It’s only a two minute walk from the restaurant’s front door. We’ll pick flowers, hogweed, wild garlic, wild leeks, and use it on the menus.”

When he’s not rooting around in the bushes, Charalambous is a Celtic chef and the owner of Cail Bruich, an award-winning restaurant in Glasgow. As a young cook and restauranteur, the talented thirty-something has quickly made a name for himself as a gastro guru and go-getter. He opened his first restaurant early in his career, a move that he attributes to “sheer naivety.”

“I was 24 years old and didn’t have a clue what I was doing,” he laughs. “But I loved cooking and working hard. I was working for other people, but I wanted to work for myself. It just seemed like the right thing to do at the time.” 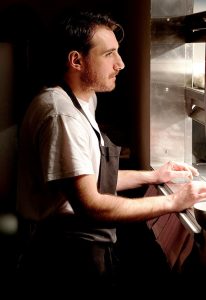 In 2006, Charalambous opened his restaurant in the Glasgow’s West End, adjacent to the city’s botanical gardens. Meaning “eat well” in Scottish Gaelic, Cail Bruich is a small family-run eatery that offers contemporary Scottish cuisine, using both the freshest ingredients and French cooking techniques. Given that Glasgow is what he calls “a meat and two veggie city,” Charalambous’ daring new menu was a bit of a risk. But trusting his gut turned out to be right.

“Seven years later, we’re still here, and we’re still making good stuff,” he smiles. “I have tried to make slow changes, and offer the diner something they wouldn’t normally eat. I’ve had fussy people eating raw ox heart and saying they loved it! It’s really just a matter of perception most of the time.”

Since opening, Cail Bruich has earned two AA rosettes, and a place on the Michelin guide. In 2013 and 2014, it was named “Best Restaurant” at the Scottish Entertainment Awards. But before becoming an entrepreneurial chef, Charalambous grew up cooking with his mother in the family kitchen.

“My mum was a big inspiration,” he says. “She used to get calls at random hours in the evening asking her to make meatballs. She was a fantastic cook who created her own opportunities. Luckily, that rubbed off on me.”

Charalambous’ mother may have been his first mentor, but he later advanced as a professional chef by interning in Copenhagen with Chef René Redzepi and the team from Noma, a Michelin two-star eatery that was ranked “Best Restaurant in the World” in 2014, and which often holds a wait time of three months or more for reservations.

“Noma is not just a restaurant, it’s a way of life,” muses Charalambous. “There are 35 chefs and 15 waiters. So there’s one member of staff for every guest.”

The experience was a career milestone that altered his cookery practice.

“It’s cutting edge, new-Nordic cuisine, and I met people that really changed my way of thinking and attitude towards food. I learned to be more adventurous, and challenge the diner’s palate.”

Buying local is key, but environmental impact is also of utmost importance. Following this manifesto, Cail Bruich’s menus revolve around the seasons, and Charalambous taps into a network of local food providers and expert foragers who supply ingredients to his kitchen. 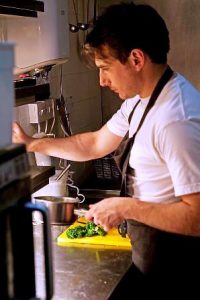 Back in Glasgow, Charalambous incorporated those ideas into his own kitchen; cuisine based on purity, simplicity and freshness, reflecting the changing seasons, and created in consideration of the environmental impact. As such, the aim is to make traditional recipes using local products, while reviving and adapting some of the older techniques, such as marinating, smoking and salting.

“We try to buy as local as possible, and go by what’s in season,” he notes. “The scallops, the lamb, the beef, the duck – it’s all Scottish. It all comes from within a couple of hours of the restaurant.”

“There’s only so much we can get in the city central,” he says. “So, one of my guys will pick in the countryside. I also have relationships with foragers further up north and down south who can pretty much get me what I want.”

Foraging is more than just eating the freshest food possible, however. As Charalambous explains, it’s about reviving a connection with nature.

“There’s something quite satisfying about going out in the morning, and picking something nice. You’re feeling it, picking it, and you’re serving it.When you do that, you’re not going to just buy a bag of salad greens and shove it on a plate.”

Of course, taste matters too. As the chef states, it’s not enough to pick greens; making foraged produce “delicious” is the “ultimate goal” at Cail Bruich.

“Right now, it’s quite warm and we’re using some elder-flowers,” he says. “They give off a wonderful kind of apple, vanilla, marzipan flavour to it. For dessert, we’re making an elderberry and yogurt sorbet with it.”

“The mushroom season is just starting in Scotland,” he points out. “We’re really famous for Chanterelles, a small yellow mushroom that smells almost like apricots, and we’re pairing that with locally reared duck from a farm that’s about an hour and a half drive from Glasgow.”

“There’s a wonderful thing called hogweed at the moment. It’s almost like a vegetable, like asparagus. You cook it, and that goes with a stuffed saddle of lamb, which is absolutely delicious.”

In with the new doesn’t necessarily mean out with the old, though. Like a gastronomic wizard, Charalambous fuses Scottish classics with seasonal ingredients. 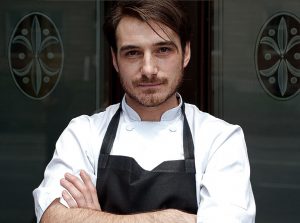 “Glasgow is famous for Tunnock’s Teacakes. It’s a biscuit with a meringue coated in chocolate. We’re making a teacake with sea buckthorn, a wild berry that primarily grows on the east coast – taking an old recipe and making it modern.”

“We also have a haggis bonbon on the menu. It’s a canapé, deep fried in a homemade sauce.”

As Glasgow’s gastronomic scene evolves – with small shops and bars popping up across the city – Charalambous contends there’s a huge range of dining and drinking options (“something for every price range and taste”) – from Chinese to modern Scottish to a simple sandwich and a coffee. But what he appreciates most is the laid-back vibe in Glasgow’s restaurants.

“We’re a working class city, very unpretentious, and it’s more about a relaxed feeling. The guys out there are cooking some good stuff, and occasionally get Michelin Stars or awards, but it’s simply tasty and that’s what people want.”