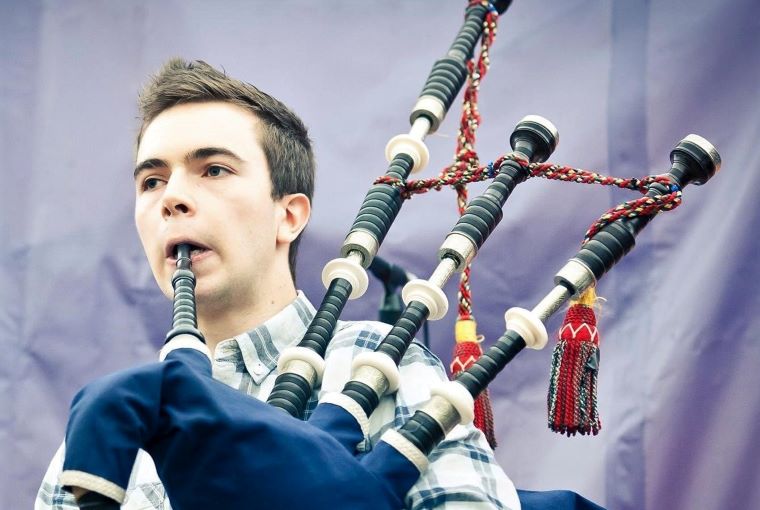 Slotting a profile on the Glasgow-based musician Chris Gray under our “Piper” banner is almost a disservice to the young artist, as he is adept at a number of instruments.

“I spent six years studying at the Royal Conservatoire of Scotland, for both a Bachelor and Master’s degree in Traditional Music where pipes, piano, and whistles were my instruments of focus,” he shares via email.

Originally from southwest Scotland – specifically Lockerbie in Dumfries and Galloway, where his family has lived for generations – Grey discovered the ancient melodies of Celtic music as a child.

“Piping was around me from a very young age,” explains Gray, who has been piping for 17 years, starting at the tender age of seven. “Around six months before I started, my older brother Steven was learning, and my dad also played. I am fascinated and fulfilled by playing music, and it has grown to become a central part of my life. I still enjoy it today as much as I did when I started, and it is the key reason why I continue to play.”

His tenure on pipes, keys, and whistles has given him many wonderful memories over the years; he has travelled abroad to Sydney, Australia to teach pipes, performed at internationally-renowned Celtic music festivals like the Ortigueira Festival in Spain and the Lorient Festival in France, and has even shared the stage with the Red Hot Chilli Pipers at the Basel International Tattoo in Switzerland.

His most recent achievement is the release of his debut, self-titled album.

“One of the biggest highlights to date was the live launch of my album at the Celtic Connections Festival earlier this year – it was really special to be on stage with such a great team of musicians playing an entire show of my own original material. My style and sound is undoubtedly influenced by my playing of piano and whistles, and exposure to lots of other kinds of music including jazz, pop, and classical. 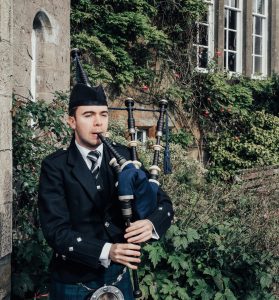 “The music on my debut album leans more towards the contemporary style of piping, but with strong elements of the traditional style that I was first introduced to.”

While eponymous, the album is by no means a solo act; many gifted players loaned their talents to the tracks.

“It is a collection of all-original tunes, featuring Highland pipes, whistles, and piano, which I have arranged for a multi-instrumental ensemble. A fantastic team of musicians was involved in the project, including Graham Mackenzie (fiddle), Innes White (guitar), James Lindsay (bass), Mark Scobbie (drums), Alice Allen (cello), Laura-Beth Salter (mandolin) and Mohsen Amini (concertina).”

“It was really special to work with them, and their energy and talents shine throughout the record.”

A behind-the-scenes, making-of documentary about the album was also produced and can be viewed on Gray’s website. He is certainly eager to share all his efforts with those excited to listen.

“So far, the response has been fantastic, and the recording has received really positive reviews. It is a really great feeling to share all of this music that has been living with me for quite a while and knowing that people are enjoying and connecting with it means everything.”

Gray holds no fears for the future of piping – he sees many young artists taking interest, in both traditional and contemporary styles. But he does believe it is an art that can be further invested in.

“In Scotland, many schools offer piping tuition. It would be fantastic to see the number of schools offering piping tuition continue to rise, and tuition be made accessible to all. Internationally, the more events and workshops getting young people involved, the better – I think there is certainly scope for this to grow.”

Despite the challenges brought on by the COVID-19 pandemic, Grey refuses to rest on his laurels.

“When it is possible, I look forward to returning to performing and bringing my music to new places and audiences. I teach piping, as well as piano and whistle, and will continue to pursue this throughout the year, in addition to composing and arranging new music.”