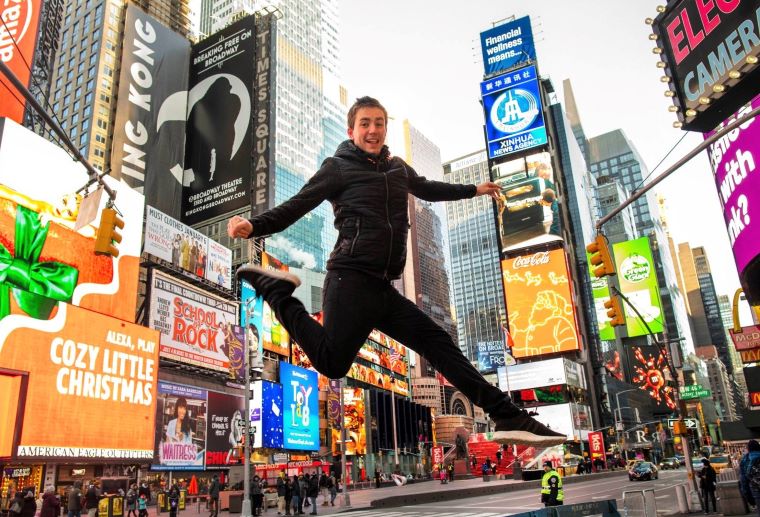 It has been just over 20 years since David Geaney first took an interest in Irish dance. Then only five years old, he became enamoured with the ancient art after watching his sister in an award-winning performance at a local community feis.

“After that, all wanted was a medal,” recalls Geaney via email. “I didn’t care what I had to do to get it, I just wanted my own medal. I took a couple of Irish dancing classes and I am still here today.”

Geaney – now a resident of Dingle, Co. Kerry – later won championships across Europe, including both the 2011 TG4’s An Jig Gig and the 2012 Kerry’s Got Talent competitions.

In 2018, the 25-year-old dancer took his career to new heights, performing his own show – Velocity – on Broadway.

“Ever since I was a youngster, I have dreamed of seeing my name in lights in Times Square – and that dream came true; we performed a three-week run in The New Victory Theater. Coming out of the stage door seeing my name next to the likes of Harry Potter, Aladdin, The Lion King, and so on was just incredible…I don’t think it will ever be topped.”

While the accolades and awards have been more than rewarding, Geaney says that he continues to perform for the sheer “love of it.”

“There isn’t a moment that goes by that I don’t think about dancing – I can’t stand still…I’m always tapping my feet or my hands making different rhythms.”

Inspired by the likes of Fred Astaire, The Nicholas Brothers and Gene Kelly, he describes his personal style today as a mix of all the things he loves. 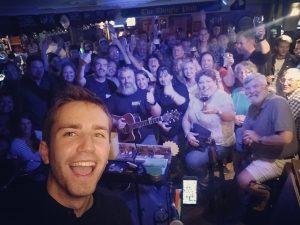 “While I am a trained Irish dancer, some of my biggest inspirations are tap dancers. I would like to think I have quite a natural, traditional vibe to my style. That said, I do incorporate modern tricks from other genres every now and again, and I wear modified shoes with metal taps and aluminum heels. Most within the circle would describe my style as traditional, but outsiders might liken it to sean-nos – meaning old style or tap.”

Today, Geaney splits his time between international tours and performing at his family’s renowned restaurant, The Dingle Pub.

Overall, he feels confident about the future of Irish culture and dance.

“It only continues to grow in popularity. With the influence and impact of social media these days, and the reach that certain Irish dancers have, it is helping to encourage more young people to get involved in the hopes that they might one day reach higher standards. And, given the increased demand for Irish music around the world – and the amazing touring artists who promote it – the interest in dance has risen as well.

“As with everything, though, you can always do more. I do think that the artists in all walks of Irish and Celtic culture do an amazing job to preserve and promote our unique heritage. Perhaps in tough times like this, however, more could be done to help struggling artists around the world who depend on the arts for their income.”

He notes that one way to increase job security is for the government to implement a wage subsidy scheme between pubs and their long-serving musicians.

“Running at 30 per cent capacity and having live music doesn’t make financial sense for musicians at the moment. With the government’s help it would be great to see Irish culture thriving again, with a greater number of people employed.”

Like many of his colleagues, Geaney anticipates a difficult end to 2020, with even more uncertainty around the forthcoming new year.

“It has been difficult to adapt. You have to try to come up with different ways of staying in touch with the audience so you can stay relevant. Thankfully, I have a great social media following, which I have focused on growing. When we do get back out on stage again, I hope to be performing to them in a live setting and not virtually. To that end, I am currently preparing for my first full U.S. tour of Velocity in 2021.”