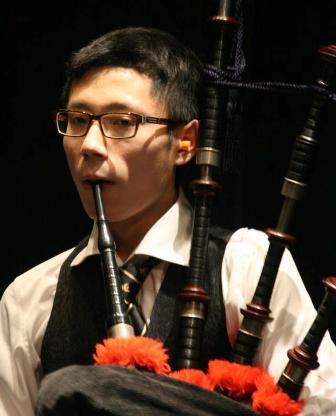 Hong Kong-born piper Chris Lee loves the sound of the bagpipes, but accepts that many people around the world do not. To many of his compatriots, the pipes sound like noise. So, after making the most of his chances to study and compete in Scotland and Canada, the award-winning young piper has returned home committed to popularizing his instrument.

“I really hate the sound of un-tuned bagpipes myself. It’s easy for the bagpipes to sound terrible as they are complicated to tune and maintain, so, getting a good tonal quality is always a challenge,” Lee said. “But when I was living in Canada and travelling in Scotland, I was able to watch and listen to the best solo competitors in the world. I learned what the pipes are supposed to sound like…The drones combine to create a constant chord which accompanies the melody played on the chanter and that sound is just hauntingly beautiful.”

Piping was introduced to Hong Kong by the British Army and that is reflected in the piping culture. Lee, now aged 23, has been playing the pipes for 10 years, after falling for their unique sound while in Hong Kong’s Boys’ Brigade. “I was marching and heard the pipe band from a distance. I couldn’t see them, but the sound was mysterious and solemn to me. In 2003, I started to learn the basic fingerings on the chanter from a friend, Roy Lau.”

“It is still one of my favorite CDs, most of the tunes are Bruce’s original compositions. I googled his name, found his website and emailed to see if I could get lessons by webcam. Soon, I started to take formal piping lessons, including my first piobaireachd from him.”

Gandy then offered Lee a scholarship to study with him in person at the Halifax Citadel School of Piping and Drumming in Nova Scotia, Canada. Lee studied in Canada between 2008 and 2010. During that time, he also worked at the Halifax Citadel National Historic site as a piper and competed three times at the North America Championships with the 78th Highlanders Halifax Citadel Pipe Band.

“The time in Halifax was the biggest part of my life. It was full-time piping, practicing and performing. I learned so much and I am still taking online lessons from Bruce.”

During that time, Lee also competed in solo contests. His awards included being named runner up for the piobaireachd sections at both the Nicol-Brown and George Sherriff contests. He visited Scotland for a total of three months and passed the PDQB piping tutor exam with distinction at the National Piping Centre, and won a CPAC grade piobaireachd prize at the Blairgowrie & Rattray Highland Games.

Now back in Hong Kong, Lee is teaching the pipes full-time. The most difficult thing is to keep the students’ interest, because teenagers in Hong Kong have lots to do.

“I play with the Hong Kong Pipe Band here, and recently the band won the Singapore Championship. In early 2012, I got to meet some international musicians who play Celtic music here in Hong Kong. Their band is called the Pearl River String Band. We’ve started to meet up for some tunes and in June, 2012, I organized my first ever recital and invited them to perform at the show.

“It was a full house and I displayed different styles of pipe music on highland pipes and Scottish smallpipes, as well as crossover with American Bluegrass music and traditional Chinese instruments. I also met Michael Spangfort from Sweden, who plays the Irish flute, whistles and bodhran. He played at my show too.  I was very happy with the show. In 2013, I performed with a group of Irish dancers and musicians during St. Patrick’s weekend, it was an awesome time.”

This month, Lee will offer Hong Kong residents his first public seminar — An Introduction to Scottish Bagpipe Music. “And I intend to keep practicing hard and to compete at solo competitions in Scotland next year.”