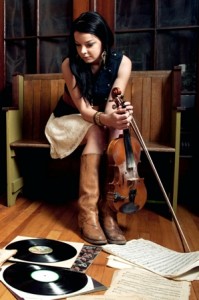 “To keep things fresh and lively, we do a lot of the final arranging the night before so that it’s still exciting for everyone going into the studio and the ideas are still rolling,” Crowley told Celtic Life Intl. “Everything you hear is literally last night’s fun.

“For years, I’ve had people tell me that fiddle records lack the energy and spontaneity of live shows. I recorded after a full summer of touring and I focused on capturing a raw and live off-the-floor feeling in the studio.”

It’s been three years since Crowley’s last CD, The Departure, and she says her new recording maintains a traditional style of playing but is more contemporary than her last.

“Fiddle is a loud instrument…I paid more attention to what roles I want the fiddle to have in the arrangements,” she said. “The fiddle is taking the strongest role obviously, but there are tasteful ways to enter and exit a solo and I experimented in finding the right entry points, so the overall musicianship is heard, not just the technicality.”

“I wanted to let the various genres sound more prominently in the final mix. My music has grown a lot over the last few years as I’ve been exposed to exciting new sounds. As soon as I sat back and started listening to some of the final mixes of the tunes and arrangements, I thought, jeez, it’s not too hard to tell I’ve been travelling.”

She certainly has been travelling. Still only 23 years old, Crowley has been a professional musician since the age of 15 and is often found performing around the world. Wherever she is, she finds audiences keen to experience the fiery style and pulse of Celtic music.

“Both of my grandfathers passed away when I was very young so it wasn’t until I was 12 that I realized how musical a family I come from. Jason Roach, a piano player, brought a fiddler to my grandmother’s house and I fell in love with the music. Jason taught me the basics, and I taught myself from that point on. I used to pretend I was sick so I could stay home from school and play. I studied the Irish music as well and I’ve become a bit of a hybrid fiddler. I don’t consider myself limited to one genre, but there will always be hints of Cape Breton in my music.”

Her large family is proud to see the fiddling lineage continue. “The only time my six siblings weren’t okay with my music was when I practiced during a hockey game,” Crowley said with a grin. “I learned that lesson when I found my fiddle in the garbage.”

This year, her many overseas appearances will include CeltFest Cuba in April, the Shetland Folk Festival in Scotland, and upcoming tours and festivals throughout the United States this summer.

True to title, Last Night’s Fun soars like an old-school, live off-the-floor Cape Breton kitchen party; Parmar’s, Doodlesack Jigs, Stepdance Set, Trundle’s and Castlebay Scrap are sonic single-malts, while Shenanigans and Coig highlight Crowley’s fury and finesse on the fretboard. The new recording is more than a rootsy romp in Celtic hay, however; both the stirring Hillbilly Lullabilly and Archibald’s Aire showcase a softer side, while the pretty lull of Paddy’s Perambulation portraits the energetic artist as musically wise beyond her years. Still, the crux of this collection hinges on fun, frolic and the simple joy of a young woman letting loose on her fiddle. Easy on the ears and eyes, the twenty-something performer is quickly establishing herself as the masterful heir-apparent to Natalie McMaster.