Christmas on the Isle of Man 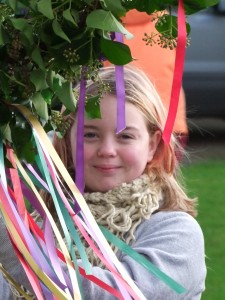 isit the Isle of Man this holiday season and you’ll have the option of joining in many colourful celebrations. Here, Valerie Caine offers readers a glimpse of the island’s festive season.

Cammag sticks raised as if in battle, the players lean in to swipe the crick, or ball, that’s being whacked toward the far goal. Warmly wrapped against the cold, spectators holler for their teams as the sound of clashing sticks and players’ cries intensifies.

“I think somebody’s died,” a player calls, and there’s a rush of laughter, an acknowledgement that cammag is a tough game, which sometimes takes players to the local hospital rather than to the Tynwald Hill Inn, where a lively music session usually helps everyone unwind after a game.

Closely linked to the Scottish game of shinty and to Irish hurling, cammag is the Isle of Man’s traditional sport. It died out in the 20th century, as soccer (football) became popular, but in the 21st century it’s back. Now, each Christmas, the island’s two teams – North and South – meet near Tynwald Hill in the village of St. John’s to compete. The match attracts a crowd, both on and off the field, for cammag is a game of few rules and historically the number of players can range from four to two hundred.

Players wear ordinary winter clothing and few bother with protective equipment, although the cammags and the crick fly high and players cheerfully push and shove each other.

The annual match is played every December 26th, known as St. Stephen’s Day (Laa’l Steaoin), and the game becomes more popular each year.

In July, when Islanders celebrate National or Tynwald Day, Tynwald Hill is used for the reading of new laws in both Manx Gaelic and English. But on St. Stephen’s Day, the hill is given over to battle-hungry warriors. Unfavourable weather does not deter these hardy men and women who play a game of three 20-minute ‘halves’ and who are spurred on by a wee dram of whisky at suitable intervals.

“The game has developed into a friendly rivalry,” says Roy Kennaugh, of the Michael Heritage Trust. “People of all ages and ability take part, although the more aged participants tend to let the younger ones do the running and simply get in the way of the opposition.”

The Manx word cammag comes from the Gaelic ‘cam’ meaning bent, and traditionally players used gorse sticks taken from the yellow gorse bushes which brighten the island during the summer. Historically, a gorse cammag of suitable size and shape would have been a treasured possession. These days, anything goes and players use cammags that are little more than blunted sticks. Other cammags resemble brooms and rudimentary axes – players have even swiped at the crick with umbrellas.

The danger increases for both participants and spectators as the players become absorbed in the game. Forgetting there’s an audience, they pursue the crick into the crowd. Unsurprisingly, the traditional expression ‘cammag leg’ described a lame person.

St. Stephen’s Day is also known for Hunt the Wren (Shelg yn Drean) which, although not unique to the island, is often quoted as a Manx custom and has been noted on the island since before 1790.

At one time, a real wren was hunted down then fastened to the top of a pole and carried about before being plucked and buried in a churchyard. Its feathers were distributed for money as a charm against evil, but this part of the ceremony has long been obsolete.

Today, groups of enthusiastic dancers and musicians still gather to perform this annual ritual, armed with a colourful wren pole decorated with evergreens. Instead of feathers, ribbons are now distributed, and the ritual is distinguished by both an energetic dance and a lengthy song detailing the capture and fate of the wren – to limit the detail, rules require that the dance and song be finished by noon.

Breesha Maddrell, of the Manx Heritage Foundation, is a Hunt the Wren enthusiast.

“It’s usually cold, it may even be snowing, but you shake off sleep and head down to the meeting place,” Maddrell relates. “Sometimes there’s a wren-pole competition…Then it’s time to move around the village or town, stopping at different points to show the dance off to new audiences. For the musicians, it’s a cold business, but the enthusiasm of the dancers – of all ages – makes up for it. Everyone usually ends up in a local hostelry or café to warm up with hot drinks and more tunes.”

Christmas Eve was traditionally a time for Islanders to visit the parish church for prayers. After midnight, the vicar would depart and leave the clerk in charge, at which point the men in the congregation would sing carvals. Largely un-associated with the Nativity or English carols, carvals are religious songs of inordinate length, some as many as forty verses, and as the night wore on the girls would become restless and throw dried peas at the singers.

Nowadays, the island’s two Manx Gaelic choirs – Cliogaree Twoaie (Northern Croakers) and Caarjyn Cooidjagh (Friends Together), which include both men and women singers, keep the spirit of the Manx carval alive through their performances and recordings.

Towards the end of the festive period, comes the Eve of the Feast of Mary or Oie’ll Verree, which has survived in different forms in the rural districts.

Kennaugh says the Oie’ll Verree is a great opportunity to experience traditional poetry, music and dance as well as the Manx Dialect play.

“This is one of the very few times to hear the Manx dialect being performed,” Kennaugh says. “The rehearsals are demanding and time-consuming, but the participants appreciate the importance of keeping an old tradition going. A good sense of humour helps.”

Over time, the term Oie’ll Verree also became a mantle for an evening of entertainment held at varying times of the year, but the village of Michael has set a benchmark by holding their celebration around the time of old Christmas Day (January 5th), reflecting the difference between the Julian and Gregorian calendars.

Initially run by the Manx branch of the Celtic Congress and now adopted by Michael Heritage Trust, this annual event at the Ebenezer Hall attracts a good-sized audience on a cold January evening. It’s a real Manx affair with dialect poetry, traditional tunes, songs and dances, new poems or sketches, a little hymn singing and a fine Manx supper, but it’s the revival of the hilarious dialect plays that make it special as they bring the old Manx ways of the countryside back to life with local humour, good-natured banter and the lilt of a rich Manx accent.

“It’s a time to hear wonderfully rich Manx accents and ways of speaking, a time to forget the hassles of the modern world and to chuckle – or even belly-laugh – with the players themselves,” says Maddrell of the performances of the Michael Players. “Oh, and there’s usually some communal singing so that everyone gets to be involved.”

Singing and belly laughs – both integral parts of the Manx winter. Merry Christmas or, as we say on the island, Nollick Ghennal.

Reprinted from the Winter 2012 Edition of Celtic Life International Magazine