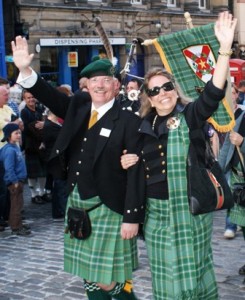 Given its bardic roots, it’s no surprise that the Clan Currie Society organizes and supports many artistic projects. This year will be an especially busy one for the Clan, whose members began organizing elements of New York’s Tartan Week celebrations as soon as 2013 dawned.

“Clan Currie created and produces Tartan Day on Ellis Island, which last year was the largest attended Tartan Day event in the world with over 72,000 attendees,” said Clan Society President Bob Currie. The Society is a member of the Tartan Week Alliance which aims to help coordinate the anchor events of New York Tartan Week, and to aid organizations which may want to host an exhibition, concert or other program.

Tartan Week is a collaboration of events that celebrate and promote Scotland in America’s coolest city. The Clan is linked to other high-profile events, including their annual Pipes of Christmas concert (now in its 15th year), which showcases music and poetry from the Celtic regions of the British Isles.

“We perform both traditional and obscure Christmas carols and poems and are committed to performing parts of the program in Scots Gaelic,” Bob said.

“We took the concert to New York City from our base in New Jersey seven years ago to see if we had what it takes to be a viable cultural event in the Big Apple. We now sell out our concerts in both states. In fact, Clan Currie’s Pipes of Christmas was named one of New York’s Top Ten holiday events in 2010. Recently, we began to commission new music from Scottish composers.”

The 2012 event featured the NYC debut of Gaelic Mod two-time champion singer, Paul McCallum and new works by Scottish composers Steve Gibb and James Ross. Proceeds from the concert support an active scholarship program for students in the U.S., Canada and Scotland.

“The challenge – and the opportunity – is to reach as broad an audience as possible. There are many Scottish societies and events in Manhattan, but the cost of access, economically or socially, is often too restrictive,” Bob said. Clan Currie charges no fee to attend their Tartan Day on Ellis Island program and their Pipes of Christmas concerts cost the same as an Off-Broadway show.

The Clan’s links with the arts date back to its origins, which began with a poetic axe murderer. “The founder of the clan was Muireadach O’Daly of Sligo [1180-1222 AD], an outstanding Gaelic poet. Muireadach was highly respected as the King’s Poet at the court of Cathal Crodhearg of Connaught. He was forced to flee from Ireland in 1213 after making an enemy of the powerful O’Donnell chief whose steward had demanded rent from the haughty bard. O’Daly’s response was to split the steward’s head in two with a battle axe,” Bob explained.

After being chased through Ireland, it’s recorded that O’Daly settled in Islay in Scotland where he became friendly with the ruling Lord of the Isles.

“Muireadach’s fame and stature as a poet was without parallel and he remained in Scotland to begin a line of hereditary bards,” Bob said.

The Clan’s other activities include museum exhibitions, documentary films and hosting the annual MacMhuirich Symposium which brings together many of the world’s leading Scottish historians. Clan Currie is also lead sponsor of the National Scottish Harp Championship.

Future plans include funding an archaeological dig at Baile nam Bàrd, the MacMhuirich home on the island of South Uist, where the Society recently held their annual symposium and constructed a MacMhuirich memorial cairn.

“Historians believe the site is quite significant,” Bob said. “We also want to continue to build partnerships with colleges and universities to help support young people interested in our Gaelic heritage.”