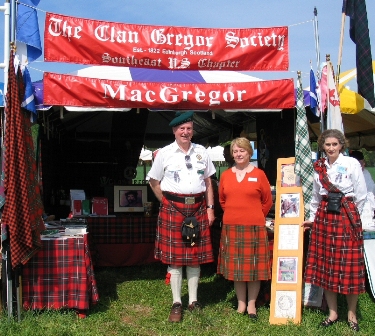 Tradition traces the Clan Gregor back to King Alpin, King of the Picts and, according to legend, first King of the Scots. But the first historical figure the clan knows is Ian Carn MacGregor, who died in 1390. The clan’s origins may be ancient, but the society has used modern technology to trace its lineage. Richard McGregor, the chairman of the Scotland’s Clan Gregor Society, created a McGregor clan DNA project in 2002 to trace the clan’s history.

All MacGregors supposedly descend from Ian Carn MacGregor, McGregor says. But according to the DNA project, about 53 per cent of those who bear the name do and 47 per cent don’t, so McGregor says the name must have been adopted for other purposes. In 1603, the name was banned after the clan lost its lands around Loch Awe to the Campbells. McGregor says over the next 10 years nearly 100 male MacGregors were slain in a concerted effort to purge the clan out of existence.

“After a brief respite in 1690-93, the name was again proscribed for supporting the Stuart family pretentions to the throne of the U.K. and the name was reinstated in 1774,” McGregor says. Nonetheless, many people with different surnames that were adopted at the time of the ban never took the original name back. The DNA project has identified a number of those, including Stirling, Drummond and Bain. The project has also found different lines of MacGregors, much smaller in size from Ireland, Rosshire and Perthshire.

The Gregor Clan Society began in 1822 as the third clan society in Scotland. For 190-plus years, the society has encouraged preservation of culture and artifacts and the dissemination of knowledge about the clan and its history and genealogy. The Scottish society boasts a membership of about 700 and a council of 14 members. Members come from around the world, but mainly from the former British Commonwealth and the United States and Canada.

The latter’s chapter is relatively new, having been formed and recognized in September 2012. Before that, an independent Canadian Clan Gregor had existed since the 1980s. Wayne MacGregor Parker, chairman of the Clan Gregor Society Canada Chapter, says they are currently exploring the benefits of merging the two organizations. “Under the umbrella of the society, Canadian McGregors can now participate more fully in bringing the history, heritage and expanded resources of the society to life as part of this larger community.”

Parker notes that one of the driving forces behind the formation of the Canadian chapter is to highlight the contributions – past and present – of Gregors in their new country. “Canada has a higher percentage of people of direct Scottish descent than any other nation,” Parker proudly says. He is quick to cite some of the MacGregors who have distinguished themselves in Canada. They include James D. MacGregor, a pioneer in agriculture and stock breeding; historian and popular author James G. MacGregor; and Roy MacGregor, columnist and popular author of over 30 books.

“Without questions, many unsung MacGregors figured prominently in Canadian history and we need to understand and honour their achievements both modest and bold,” Parker says. “It is for this reason that we have formed a Canadian chapter.” Currently, the Canadian chapter has active members in seven provinces, as well as two expatriates living in the United States.  Parker notes that organizations the world over struggle to keep members and relevance in modern society, especially with young people. “We are committed to working hard to further those important objectives through participation in the Highland Games and building social and organizational contacts and connections.”

In the United States, the American Clan Gregor Society formed in 1909 in Charlottesville, Virginia when a small number of MacGregors met together. According to Lois Ann Garlitz, chieftain of the society, most members have joined through word-of-mouth or because of family connections. These days, many find the society through Google searches on the Internet. Currently, the American society numbers around 700 members.

In 2014 the big event for all the clans, of course, is The Homecoming. The society in Scotland is hosting a world-wide gathering of MacGregors in Stirling in July as part of the anniversary celebrations of Bannockburn. Says Parker: “In Clan Gregor Society, it’s more than just wearing the kilt or sporting some MacGregor tartan. We believe in and count upon strong participation. Membership has its privileges, not the least of which is doing one’s part in keeping the flame of Gregor alive and moving forward.”