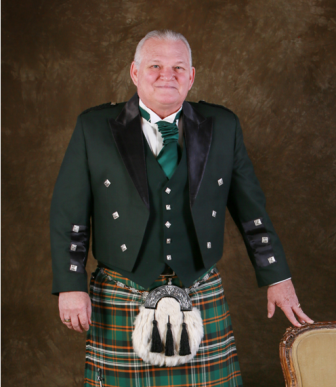 2015 is going to be a busy year for the Clan Henderson. Along with attendance at an array of activities, the society is actively recruiting new members. Membership Secretary Mark Henderson explains.

How long have you been involved in the Clan and in what capacity?
We have a saying: “You are born into the clan, you join the Society.” I joined the Clan Henderson Society, Inc in 2008. In 2011 I answered the call for a new Membership Secretary. I absolutely love the position because I get to meet and converse with so many of my cousins—around the world  I am amazed at the stories they have to tell, their obvious pride in our Scottish and Scots-Irish heritage and the talent and enthusiasm so many display in support of our clan.

What inspired you to get involved and stay involved?
My wife and I attended a very small Scottish Game—only because it was nearby. I had no clue what it was all about but by the end of the day, I was hooked. Soon, I had a kilt and we were off to a much larger venue. As we arrived, the massed bands were parading on the field—I felt like the pipes were rejuvenating my blood. I have never lost that feeling—something exciting inside. Then, as I met my “Son of Henry” cousins and so many wonderful others at various games, I knew that embracing my Scottish heritage was definitely for me. Luckily, my wife, who is of Italian descent, also supports this quasi-addiction of mine. In fact, we call our marriage a Gaelic-Garlic one!

What is the Clan’s origin and history?
The MacEanruig’s (Scots Gaidhlig for sons of Henry) actually represent five (5) separate bloodlines that evolved as surnames became more common. We have the Henderson’s from Caithness (historically associated with the Clan Gunn), the Henderson’s of Fordell (our Chief’s bloodline), The Henderson’s of Glencoe (historically, the pipers to MacIan—a MacDonald Chief. In fact, at the infamous 1692 Glencoe Massacre, many Henderson were among the slaughtered.) We have the Henderson’s of Liddesdale, Border Reivers and finally, we recognize Irish Ulster-Scot Henderson’s as a distinct bloodline. Lord Lyon decided that all Henderson’s should be grouped into one clan and the oldest lineage would be Chief of the Name and Arms of Henderson. The Henderson’s of Fordell have that honor, tracing unbroken lineage back to the 1400’s. However, scraps of Henderson lineage go back to the dark ages and there is some conjecture of ties to Pictish Kings.

How has it evolved over the years?
The society was formed in 1988 and in 25 years has grown to over 4200 members.  From its original 26 members, concentrated in the southeast USA, we now have members in all 50 states, as well as nine other countries. Interestingly, there is a large contingent of Hendersons in Uruguay who communicate often via Facebook. One of our Past Presidents visited with them in Montevideo and they were VERY enthusiastic but the language barrier has yet to be fully overcome.

How many members are actively involved currently?
Alistair Henderson of Fordell, Chief of the Name and Arms of Henderson has asked the Clan Henderson Society, Inc. to help “gather the clan.” We have been doing that since 1988 when the Society was first formed at Grandfather Mountain, NC.  To date, over 4,200 MacEanruig’s (sons of Henry) have answered that call, including almost 200 Canadian members who formed their own affiliate. Unfortunately, that affiliate went defunct in 2014 and we are in the process of “gathering” our Canadian cousins back into the CHS, Inc fold.

Where are Clan members and how do they find you?
In 2011 the CHS Executive Committee authorized funds to completely overhaul our website. It went from a relatively static, staid venue to a vibrant, interesting and dynamic site.  It is constantly upgraded and details kept up to date. In three years we have found that over 50% of our new members are “googling” and then find us “accidentally.” From there it is a simple matter to use the instant sign-up feature to join our Society. Having a Hospitality Tent presence at games, and attracting new members thru face to face contact, is still an important component to gathering the clan, as well.  Of the over 150+ Scottish/Celtic festivals held annually in North America, we have a presence at approximately 45 of them.  In 2014 we added a “roving convenor” who attends hard to reach games, not historically on our plate. He is a retired gentleman who travels the USA and Canada in an RV. He has all the tools to convene a hospitality tent on the spur of the moment.

What are the challenges involved in recruiting new members?
The biggest challenge is getting younger members to join. Many members join as an adjunct to genealogical research and typically are older when that bug hits them. They start to think about their heritage, etc. However, when we get younger members with children, those kids grow up to be members. Having quality, child-centric events at games is a huge recruiting tool. A second challenge is member retention.  Creating a vibrant, responsive and evolving dynamic to the clan is important. No one gets paid to participate—it is a labor of love. Identifying and retaining members to hold key positions, to volunteer to organize things, and to manage operations, members, budgets, legal issues, etc., etc. is a tough thing to do correctly. Unfortunately our Canadian affiliate learned this the hard way and went defunct…but we are gathering those members back into the Clan Henderson Society, Inc.

What are some solutions to those challenges?
Involvement. Today’s technology makes it easy to reach out to people. The website is invaluable, but we also find our Facebook page—a members’ only site—is huge in getting out information, answering questions, and creating an overall sense of kinship. Also, we give all new members a packet of information that answers many questions they have at first: How do I buy a kilt? What are unique Henderson things I should know about?  What do women wear to Celtic events? How is the Society organized? How can my talents be used? We have 11 Regional Commissioners, and their participation makes a direct impact.  Just the simple act of sending an email from time to time makes a difference.

What kind of Clan related events do members participate in?
I mentioned our presence at Regional festivals year round. However, there are two key events that draw Henderson’s from far and wide each year. Our Annual General Meeting (AGM) is held at different locations around the country. In November 2015, we will be in Salado, TX.  We also gather at Alexandria, VA for the annual Scottish Christmas Parade.  We follow that with a traditional ceilidh. In 2009 and 2014 the Clan also arranged a tour of Scotland. Both events were very well received and gave us a chance to mingle with Fordell, our Chief.

What does the Clan have planned for the rest of 2015?
In addition to participating in many regional festivals this year, in December, we hope to visit the National Scottish Immigrants Memorial in Philadelphia, as a clan. Our Chief, Fordell, has indicated he would like to be with us, and our goal is to dedicate a Clan Henderson Memorial paver stone that we had installed there.