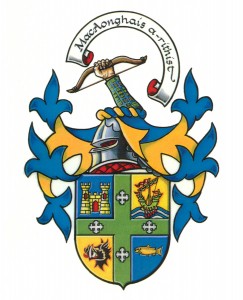 Clan MacInnes is one of the oldest, and most active, Scottish communities around today. Recently Celtic Life International caught up with Clan Historian Norm MacInnis.

How long have you been involved in the Clan and in what capacity?
I have been active with the Clan for twenty years, first as New England Commissioner, then President for eight years. I am currently Clan Historian.

What is the Clan’s origins and history?
Clan MacInnes is an ancient clan with roots in the sixth century Dalriadic period. Its ancestral home is Morvern on Scotland’s central west coast, and the Clan Castle is at Kinlochaline. Closely allied with Clan Donald, they fought under the Lord of the Isles, Somerled for the expulsion of the Vikings. The Clan Chief and his five sons were assassinated in 1258 on orders from John the Good, then Lord of the Isles. These executions effectively ended the Chiefly line. At that time many of the survivors took up an offer from Clan MacKinnon on the Isle of Skye to become their official bowmen.

How has it evolved over the years?
Today, Clan MacInnes are found all over the world, primarily in Scotland, the United States and Canada. The Clan MacInnes Society was founded in the U.S. at Grandfather Mountain in 1970. In 2000 we reorganized as the International Association of Clan MacInnes to reflect our growth as a global organization.

How many members are actively involved, where are Clan members from, and how do they find you?
We have approximately 400 members from the UK, Canada, U.S. and Australia. The Clan Association sponsors Clan tents at most of the Highland Games in North America where membership inquiries are accommodated. We have an excellent Clan website that features a history of the Clan, explanation of Clan symbols, Chat Room for exchanging family connections and ideas, schedule of Clan events and gatherings, membership application, and links to other Scottish/Celtic websites.  We also advertise in major Scots/Celtic publications like Celtic Life International.

What kinds of Clan-related events do members participate in?
There are many; Annual Clan Scholarship awards in Scottish arts, music and dance since 1972; Quarterly Clan newsletters in North America and Scotland; Clan tours and travel opportunities to Scotland and Nova Scotia; Publishing books related to the Clan, as well as Scottish and Celtic culture, currently five total publications; Genealogical assistance and historical research; Clan markers and memorials; Maintaining and growing a Clan Archive; Network opportunities at tents and our website.

What does the Clan have planned for 2013 and in the years to come?
2013 will be a big year for Clan MacInnes — a memorial Cairn will be raised in Antigonish Cairn Park in July, during Highland Games week. We also plan to hold our AGM and members will be traveling from all over North America to meet and celebrate the 150th anniversary of the Antigonish Highland Games. Our future plans include raising Clan Cairns in the Cape Fear area of North Carolina and Kinlochaline, Scotland, publishing a second book of Clan history, and expanding our Scholarship Program.

Clan MacInnes International Association will place its first Clan Marker in Canada on July 12—commemorating the Clan’s first entry into North America in 1791.

The Clan MacInnes Cairn will be dedicated in Cairn Park, Antigonish, Nova Scotia during the 150th Antigonish Highland Games.

The MacInnes Cairn, shaped like a castle, is one of the final few monuments for Antigonish Cairn Park, dedicated to the pioneer Clan families who settled Eastern Nova Scotia in the late 18th century. The first stone in the park was placed by Clan Chisholm in 1983, followed by Clans Donald, Chattan, MacDougall, Stewart, MacLean, and the Antigonish Highland Society.

This cairn marks the second in Clan MacInnes’ ambitious Clan Marker Project to place markers in key locations worldwide with Clan significance.  The inaugural marker was a granite bench at the entrance of Ballachulish Church in Ballachulish, Scotland, where MacInneses and other clans gathered to pray before the 1746 Battle of Culloden.

MacInneses and the public are invited to the Friday afternoon dedication of the MacInnes Cairn at 4:30pm, followed by an AGM dinner gathering that evening and a casual get-together Saturday evening after the Antigonish Games.