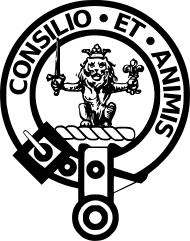 With a long and rich history, and an active membership on both sides of the Atlantic, Clan Maitland is one of the pre-eminent families of Scottish origin. Recently, Celtic Life International spoke with Rosemary Maitland Thom, Secretary for the Clam Maitland Society of North Amercia.

How long have you been involved in the Clan and in what capacity?
I first joined Clan Maitland in 1999 and was appointed Western Regional Vice President in 2000.  In 2001 I was elected as Secretary of the North American Society, a position that includes membership and continue to retain that position.  I am a first generation Canadian.  My husband and three children immigrated to the United States in 1969.  It was through a local Scottish group that I became aware of the Clan Maitland Society and joined at the first opportunity.   Our first trip to Scotland was in 2001 for three weeks.  There we toured the country and spent time finding where our fathers were born.  My father was from Kilmarnock and my husbands’ was from Dundee.  Addresses from census records aided us in our quest.  It was like going home.  We have since traveled to Scotland four more times and plan to return in the future.

What is the Clan’s origins and history, and how has it evolved over the years?
Clan Maitland UK celebrates its 50th Anniversary this year.  It all began in early 1960 after the late Chief spent an afternoon and evening at Edinburgh airport waiting for the fog to lift so that his plane could take off for London where he sat in the House of Commons as MP for Lanark. He bought several packets of envelopes and spent the time combing the phone directories at the airport for the names of Maitland’s, and subsequently wrote to 700 of them to tell them of their heritage.  A reply was received from 200 of them making their claim to wear the Maitland tartan which is available to all of Maitland descent.  The clan society was officially founded in 1963 and its first newsletter published. The origination of the tartan goes back to 1953, before the establishment of a clan, when, on the occasion of the Queen’s progress through Edinburgh after her coronation, it fell to the then Master of Lauderdale to deputize for his brother, the 16th Earl, as Hereditary Bearer for the Sovereign of the National Flag of Scotland, the flag of St. Andrew.  The authorities agreed that the Bearer should appear in Clan Tartan, but it was not clear what that should be.  The Lord Lyon made clear that although the Maitland’s are by origin Lowlanders, it is fully proper for them to wear tartan.  A modification of the known and accepted Lauder tartan was suggested because the Maitland Chief was Earl of Lauderdale.  Narrow red and yellow stripes were added to the Lauder tartan and that became the official recorded Maitland tartan.  Sales of this tartan are restricted to members of the Clan Maitland Society. In common with many lowland clans, we are all blood relatives (with a single forbear) rather than a tribe in origin, and trace our descent to two identifiable individuals – one the Mautalent who accompanied William the Conqueror on his invasion of England, and the second, Robert Maltalent who in 1138 witnessed a charter in northern England for a neighbor of his from Normandy, Nigel d’Aubigny, who had just become the Earl of Mowbray.  From then on the charters of the period, mainly land transfers, show the close connections between the Maitland’s, then called Maltalent or Mautalent and several families from their part of Normandy – Morville, Valognes and Aubigny.  In due course, from 1250 Richard Mautalent held old Thirlestane (which still exists as a ruin) from the heirs of the Morville family, and Maitland’s have been in Lauderdale ever since then, spreading from there to Aberdeen and Galloway, and from Scotland to England, North and South America, Canada, Australia and New Zealand. We are unique in still having connections with and knowing personally the Mautalents of Normandy – the only Scots family to know and identify its Norman – Viking family and their descendants. Notable ancestors include William Maitland of Lethington who was Secretary to Mary, Queen of Scots and John Maitland, Lord Chancellor of Scotland to King James VI (King James I of England) who, in 1590, was raised to the peerage as Baron Maitland of Thirlestane.   By marrying Jane, daughter of Lord James Fleming, he enabled his descendants to inherit the royal blood of the Stuart Kings of Scotland, the Plantagenet Kings of England and of Charlemagne the 9th century emperor in Europe.   His son was made Viscount Maitland and in 1624 became an Earl for his service to the State.  Maitland descendants to this day hold the title of Earl of Lauderdale.  In 1647 the 2nd Earl of Lauderdale changed from being a supporter of the parliamentary armies fighting King Charles II to a Royalist when the King was a prisoner of the Parliamentary army, and later, after the Restoration, became Duke of Lauderdale and the ruler of Scotland for nearly 20 years. Lt. Colonel the Honorable Richard Maitland was Deputy Adjutant General of North America from 1766 to 1772 and took part in the action to capture Quebec.  Lt. Colonel the Honorable  John Maitland raised the siege of Savannah in the war with the American Colonies in 1779 and this action is commemorated by an exhibition in the USMC museum at Parris Island, NC.  The 8th Earl of Lauderdale was the first economist to identify and explain in 1804, the significance of budget surpluses and deficits and their influence on economic growth.  Captain Frederick Lewis Maitland took Napoleon’s surrender in 1815 when commanding HMS Bellerophon. Lauderdale’s in the USA are mainly descended from James Maitland who we believe originated in Galloway in southwest Scotland and migrated to Ulster before moving to Pennsylvania in the American colonies in 1714.  At some stage he changed his name to Lauderdale, and founded the distinguished American pioneer family of that name.  Fort Lauderdale and a number of American counties are directly linked with the family.  James Maitland Lauderdale is known simply as “The Immigrant”. The North American Society was formed in 1980.  Included in its purposes are the collection and preservation of historical information and literary research, genealogical records and documents, and any relics relating to the Maitland/Lauderdale family both in North America and Scotland.

How many members are actively involved?
As the name implies our members are from both Canada and the United States.  An annual meeting is held each year and varies in location.  Our current membership is 140 families.

Where are Clan members from and how do they find you?
Our group publishes the Maitland Matters newsletter four times a year, and the Chief sends out his annual Yearbook.  In keeping up with the latest technology, in 2012 a Closed Group Facebook Account was opened and a new web site for North America was established.

What kinds of Clan-related events do members participate in?
Two trips of the North American group have been taken to Scotland.  The first was in 1986 when 17 members took a group tour of Scotland where they visited many Maitland’s and toured sites and buildings relating to the Maitland/Lauderdale family.  The second, in 2009, 42 members traveled to the first ever “Homecoming Scotland” held in Edinburgh, with the first day being spent at the Highland Games and Gathering of the Clans held in Holyrood Park.  Members visited properties associated with the family – Lennoxlove, Traquair House, St. Mary’s Collegiate Church at Haddington with its Lauderdale Aisle, and had a delightful tea at Thirlestane Castle.

What does the Clan have planned for 2013 and in the years to come?
Plans are well underway for the 2013 Clan Gathering and AGM being held in Dallas/Ft. Worth, Texas in September.   Our Chief,  Earl of Lauderdale plans to be in attendance. Set in the Scottish Borders at Lauder, Thirlestane Castle has its origins in the 13th century. It was rebuilt as the Maitland family home in 1590 and greatly enhanced by the Duke of Lauderdale in the 1670’s. In 1840, it was extended and refurbished with the addition of two new wings.   Be sure to put this on your list of places to see if traveling to Scotland.  Maitland’s continue to inhabit this home also known as one of five Great Houses of Scotland.  In England, Ham House near London was also decorated and furnished by the Duke in the 1670’s and is a unique example in Europe of a 17th century house with nearly all its original furnishings and pictures intact.