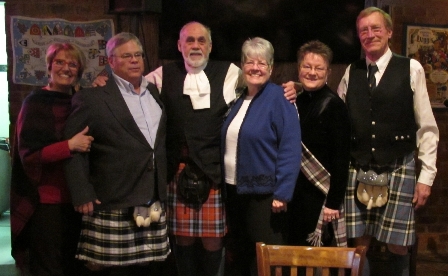 Thomson may be the sixth most common surname in Scotland, but it’s only been in the last few decades that it’s received recognition as an official family and clan name.

Indeed, in 2012 is when the Clan Thom(p)son Society finally saw the design for a new Ensigns Armorial. The young society began in 2006, according to its president, Mary Thompson. At that time, it was simply an organization for all the variations of Thoms, who felt they had a right to have an organization that carried their name. “At that time we found no historical documentation confirming our feeling that Thoms must have been a clan at some time,” Thompson says.

Many of the members of the Thompson clan had been members of other clans or societies, Thompson notes. But they felt they weren’t truly part of those clans, but added more for financial purposes than for any true kinship. In 2006, society members set about doing in-depth research in order to discover and document facts about the Thoms. In turn, this led to the discovery of the 1587 and 1594 Acts of the Scottish Parliament naming Thomson as a clan in the West Marche, with additional references to Thoms in Edinburgh and elsewhere.

The first historical reference to Thomson as a distinct border family were recorded by the English Lord Wharton in reports to the Earl of Shewsbury in 1540: “The Batyson and Thomsons of Eskdale, have burnt a town called Grange….” On the clan’s website, it is noted that “there is no single originating family named Thomson responsible for all the Scottish Thom(p)sons found today. The name is patronymic, in that the next generation is named after the father’s personal name. Although many have been linked by the Thomson DNA project, Thomsons are very numerous over a large part of Scotland and are primarily found south of the Forth and Clyde.”

Today, the Clan Thom(p)son Society has members on five continents and Lord Lyon King of Arms who devised the Ensigns Armorial for the clan set the spelling as the more, modern, common one of Thompson. Therefore the (p) is added to make it inclusive; the clan is the only one with the name Thompson.

The clan’s Amorial features a stag’s head with black antlers, thought by some to reference Henry Thomson, Lord Lyon, 1498-1512. The current Lord Lyon also confirmed the motto “Deny Us Not,” as appropriate to the society’s history as a riding clan from the borders. The Scottish Tartan Registry now lists the Thomson Dress Blue as the official society tartan.

Currently, the clan society numbers about 150 members from all around the world, including from Canada, the United States, Scotland, the U.K., France, Australia, South Africa and Botswana, among others. The members take part in activities ranging from dinners and camping weekends to competitive games. The annual general meeting is open to all members, either in person or by proxy and is held in different parts of the country each year to enable more members to attend near their homes.

In 2014, the clan plans to continue researching their ancestry and will encourage members to submit DNA samples, allowing them to more accurately trace where related families were located in the past. Says Thompson: “We are still a small society and our energies are focused on getting the word out to the Scottish Diaspora to let Thoms know that they have a name and a home of their own and no longer have to accept status as another clan. As we continue to grow, the ability to have more member interaction will increase, which will bring its own rewards.”