Cuthbert Grant; Warden of the Plains 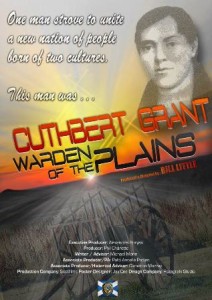 Canadian history will remember Cuthbert Grant – a direct descendant of Clan Grant – as a prominent leader of the Manitoba Metis in the early 1800s. Now, a new movie – Cuthbert Grant; Warden of the Plains – aims to celebrate his life and legacy. Recently, Celtic Life International spoke with the film’s producer, Sandra Horyski.

What are your own ethnic/cultural roots?
I am a proud Metis of Scottish and Aboriginal heritage. I am like so many others the result of marrying of the two aboriginal peoples, the Gaelic Highlander and the First Nations tribe. My great, great, great Grandfather Cuthbert Grant Sr. was born in Cromdale Scotland and is part of the Clan Grant of Strathspy, he married a woman of Cree and Metis background. Cuthbert Grant Sr. and his brother Robert Grant were two of the founding members of the North West Company and belong to an elite group of early fur trade barons in Canada.

When and why did you become interested in Celtic culture?
I have always had a love of Scotland and Celtic Culture since a small child as Celtic music was always played in the house. Since finding out I was related to Cuthbert Grant in the last 10 years I have lived and breathed that part of my heritage and have made 3 trips in total to Scotland and each time was like a child will eyes filled with great wonder on a quest to learn more about my famous Scottish ancestors. I always felt something was missing in the story of my forefathers and once I discovered who I was and where I came from I had to know more and share the knowledge with others.

What inspired you to kick-start this particular project?
I spend the majority of my life not knowing who I was and that I was Scot Metis, this journey of self discovery has led to the joining forces with other Scot Metis Descendants of Cuthbert Grant and we hope to uncover the name of Cuthbert Grant from the pages of Canadian history and to preserve and promote our great Metis Heritage for future generations and to celebrate our great Celtic beginnings and our links to Scotland. I had the great honor to make a return trip this January to Scotland, the home of my ancestor, Cuthbert Grant Sr. who is from Cromdale in Scotland. I had with me a 1ST ever Metis, Cuthbert Grant Presentation to gift to the Scottish First Minister. Many Cuthbert Grant descendants entrusted me to bring some of their treasures to Scotland, such as The History of the Métis of Willow Bunch a new book released by Saskatchewan authors Ron Rivard and Catherine Littlejohn. Ron Rivard is a member of our Sept. As well as music by Sierra Noble, Ray St. Germain and Jerry Sereda. This was a first of sharing of our great Metis Culture with Scotland. And I have since found out the Scottish First Minister is a huge history buff and looks forward to a visit to CANADA to see where a lot of Scottish people settled. One of the goals on my recent trip to Scotland was to meet up with longtime friend Bill Little ScotsFilms who I have so much respect for. His talent for producing and directing is being legendary in Scotland. I carried with me the plan to sell him the idea to do the film on Cuthbert Grant. This amazing Film project has been the minds of many for a great many years and now it is time to make it a reality. As I unfolded the true story of Cuthbert Grant to this director who has worked on such films as Braveheart, King Arthur and many more the rest is as they say is history he was hooked on the story.

What are the challenges of taking it on?
The challenges of a project such as this is gaining support and funding for the Film, Cuthbert Grant has really been forgotten in Manitoba and Canadian history, he is not as well known as say Louis Riel and of course there is the Seven Oaks Battle that made him fall out of favor as it was deemed a massacre and it was not. So it will be a huge challenge to also tell the story in the proper way as there are so many descendants we want to ensure the story is told correct.

What are the next steps in the process?
At the moment the script is almost complete and we are now seeking funding in Scotland, Manitoba and Saskatchewan as the story takes us to all these places. As we are at the critical stage of the project….funding… and sponsorship of the film

Who will the film appeal to?
The Film will appeal to everyone as it shows early Canadian history and Scottish history as well. The History buff and academic will also love this. WE have many museums and educational institutions showing great interest in the film project. It will appeal to those also on a quest for where they came from.

Why will it be an important work for both the Celtic community and the non-Celtic community?
This will be of huge importance as a historical link from the Old World – Scotland to the New World – Canada. It will be a film that will both celebrate our Celtic part of our heritage. So many people left from both Scotland and Ireland to seek fame and fortune and a new life in the New World and this film will portray one of the many success stories of such a venture. This movie is a Scottish and Manitoba production about a hero that is highly respected and celebrated in Manitoba and is a hero in waiting to Scots. So many key people in history take their place in this amazing true story: Upon the death of Cuthbert Grant Senior, young Cuthbert and James were made the protégés of William McGillivray of the North West Company in Montreal. McGillivray was the most powerful man in the fur trade, and was a family friend of long standing. The children moved to Montreal in 1801, and Cuthbert and James were placed under the control of another fur magnate, John Stuart, a cousin of Donald A. Smith. Stuart, carrying out the directions left in the will of the late Cuthbert Grant, had the boys baptized in the Presbyterian Church. They were then sent back to Scotland to be educated in the manner of the British Aristocracy. James remained in Scotland but Cuthbert returned to Montreal when he was sixteen years old.

When will it be released, and where?
We hope to start filming in Manitoba end of July 2013 with a release date in Canada and Scotland sometime in 2014 as well as worldwide release.