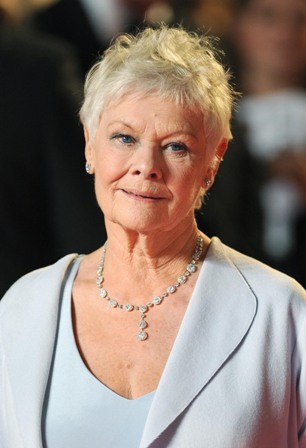 From Shakespeare on the stage to James Bond on screen, Dench has spent more than 50 years wowing audiences. And despite now approaching her ninth decade, the actress shows little sign of slowing down.

Her latest film, Philomena, a screenplay co-written by Steve Coogan (who also stars) is a true story set in Ireland. In it, the lead character undertakes a pilgrimage to discover the fate of the baby she was forced to give up for adoption five decades earlier, as an unmarried teenager working in one of the Irish Republic’s penitential Magdalene laundries. The film packs an emotional punch, and features a typically Dench performance of effortless poise.

Born in December 1946 in York to an Irish mother (who met her father when he was studying medicine at Trinity College, Dublin), Dench, 78, was able to sympathise with Philomena’s narrative arc. But before the film, how aware was she of the prevalence of such scenarios that were often played out in the Catholic Church?

“Well, because of the Magdalene Sisters – the film from 2002 – I was very aware, like we all were. There was a focus suddenly on it and everybody was aware it was happening. But as far as this story is concerned, in a way I think that’s not so much what the film is about.

“For me, it’s about is a woman who comes to terms with that, who can live with it, years and years on, and actually never tell anybody about her son for 40 years… not even her daughter. She then has to go through the search and then, on the other side of it, come out as a much stronger person who actually can turn around and say, ‘I forgive you for what happened.’ I don’t think there are many people whose story could have gone that way.”

Research for the film included more than re-watching a decade-old film, with Dench going to meet the real-life protagonist Philomena in order to fully appreciate the plot. “I met her before we started shooting and we had lunch. She’s very funny and very Irish, just like my mother was. Not that she was like my mother in any way, but I have many Irish friends who I saw similarities in. Irish people are just so happy and optimistic, I have found, no matter what they go through. That’s perhaps a generalisation, but anyway…”

Unlike her late actor husband Michael Williams, Catholicism never swayed Dench. She remained true to the Quakerism that attracted her so many years ago. “I am a Quaker. My husband, who died, was a Catholic, and I am a Quaker. And somebody said to us before we were married, ‘You must convert’. But that’s been the structure in me and is something that I can’t do without – that was a personal decision for me for a long, long time ago and it’s always been very important.”

Talking to Dench, her positivity and good natured humour is as noticeable as it is welcoming – not that Dench has ever had any notions of diva behaviour or grand old Dame eccentricities. The only moment when conversation is anything less than joyful is when it turns to her late husband, who left a gaping hole in Dench’s life upon his death in 2001. “Nothing compares. What you lack when you’ve been living with someone is the physical contact; someone who will put their arm around you, or just hold you instinctively when you need it.”

What was her coping mechanism? “Friends. My friends were and are everything, and they were staunchly supportive and ‘there’ for me. And, I admit, I was also offered a lot of good jobs, and I threw myself into work.”