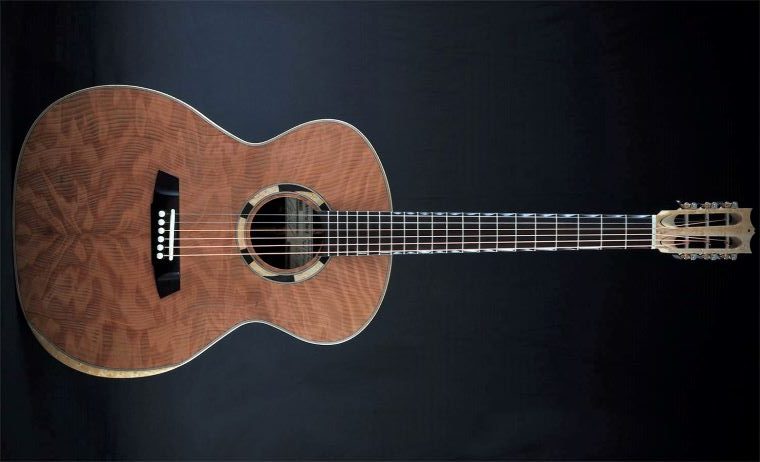 David Anthony Reid is nothing if not a true Scot. In 2016, a distant cousin of the award-winning luthier traced the family’s lineage back 440 years, connecting them to the Scottish Reid-Robertson clan.

“As far back as the records go, we originate in central Perthshire, around the Blairgowrie area,” he explains via email. “I was born in and spent my first five to six years in the town of Blairgowrie.”

Reid’s desire to play music began at a young age, though he admits that he didn’t become “musically proactive” until the late 1980s to the mid-1990s as electronic music became increasingly popular throughout the U.K.

“I was a bit caught up in all of that and became a DJ for a while, but when Brit Pop really took off in the mid ‘90s, I got back into guitar bands and again had a hankering to play. I couldn’t afford to buy a guitar at the time as I had just spent a small fortune renovating my first flat. So, being quite able with my hands, I decided to reverse engineer a friend’s acoustic and built my own first guitar.”

Reid spent the next few years repairing guitars and pursuing an education in mechatronic engineering. Before long, he was accepted into a one-year course in Glasgow, where he got to build guitars at a professional level.

“I was meant to resume my engineering studies after one year in Glasgow, but I pursued another two years of guitar making study at London Guildhall University and then established my business and name in London for many years thereafter.”

His business, which remains based in London, specializes in making and repairing both acoustic and electric guitars. Reid also developed a smooth and balanced style of guitar – what he describes as his “signature model” – called the vault back guitar. 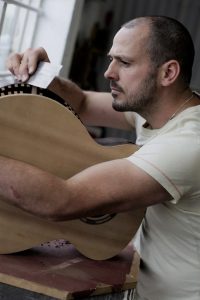 Today, the core focus of his business is bespoke set-up services.

“I am the only luthier that I am aware of to provide this service. It involves me working with the player in person and changing their instrument in increments whilst getting them to play the guitar for me – then working back and forth until we achieve the perfect union. I change the structure of the instrument further if we can’t find that perfect balance in just a setup session.

“As a teacher of guitar construction, I realized that even the best and most intelligent learners can’t possibly gain the knowledge and experience that I have accumulated over the years by simply spending a couple of years with me – never mind a couple of hours. I don’t feel like I have to harbour knowledge and expect a client to just collect their instrument after I have ‘set it up.’ The real benefit is to have my clients observe exactly what I am doing to their instruments, and to educate them about their mechanical construction and the organic nature of wood.

“The transformation that a bespoke setup can do for a guitar is unbelievable for some. To see how happy and in love with their guitars people become after I have worked on them is really rewarding. It is the thing I love the most about my work. When I finish making an instrument and play it for the first time is also very special.”

Even still, his career journey has not been without its challenges.

“Being a full-time guitar maker does not happen overnight. It took years of blood, sweat and tears to become a full-time maker of instruments.”

One the biggest vocational difficulties remains the general lack of education about wood instruments.

“A lot of guitarists don’t realize that they have to care for it a lot more than most manufacturers inform them. I have had to educate the managers of many leading U.K. guitar shops and stores about these issues.”

Reid plans to return to Edinburgh soon – and, perhaps, somewhere warmer come the summer months. He doubts that he will ever fully retire.

“I will probably never stop working on guitars. When what you do for a living is a passion and something that you love, why give it up? I plan to continue doing non-woodworking guitar repairs and my bespoke setups for as long as I live.”