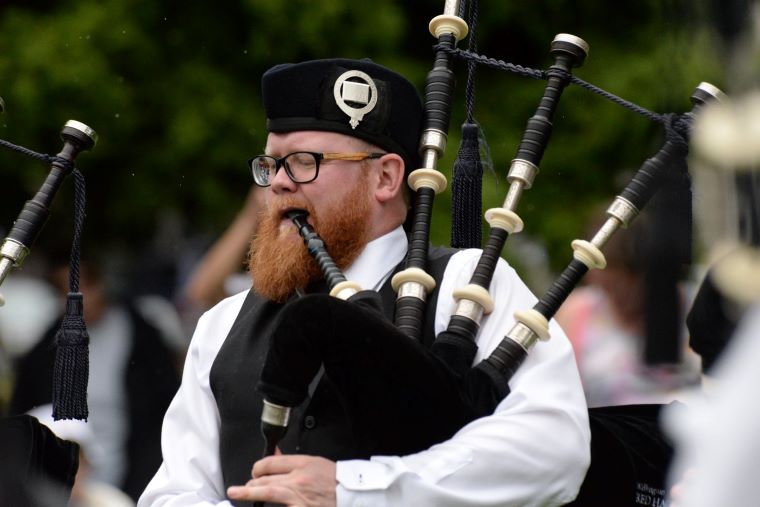 Growing up on the Scottish countryside, David Welsh was destined to pick up the bagpipes.

“I learned to play in Aberdeen with the 47th Culter Boys Brigade, moving from Novice to Juvenile, and finally into the Grade 2 band of Culter and District by the age of 15,” shares the 40-year-old via email. “Although I enjoyed some solo success in the under-18 categories, I found my passion to be with the pipe bands and thus became Pipe Sergeant of the newly formed Grade 3 Deeside Caledonia in 1995.”

Now, over three decades later, he continues to play for the sheer love of the instrument.

“I am constantly learning new things and becoming a better player. I love both the sound of the bagpipe and the challenges involved in producing a high-quality sound; the combination of a well-maintained instrument with proper finger and blowing technique. I still have many more things that I wish to achieve with my own playing and in pipe bands and will continue to pursue that for as long as my fingers let me.”

Welsh – who plies his trade with a set of 1980 Engraved Silver David Naill pipes – admits that the vocation can be challenging, both as a solo performer and as a band player.

“It can be very difficult to stay relevant musically. And keeping the fingers going and continuing to play at a high level isn’t easy.” 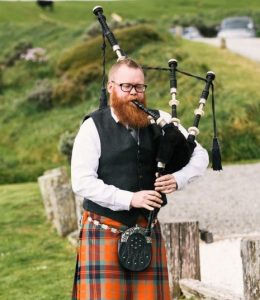 “As well, piping is a reasonably expensive hobby, and it can be tough earning enough from it to be able to continually pursue my goals.”

“I am also Pipe Major of a band with both a Grade 2 and Grade 4 teams,” he continues, “and there are many challenges involved with this, both at a competitive and non-competitive level. Attracting new learners and new members is also an on-going issue. We need to shed the ‘shortbread tin’ image – the pipes are, after all, a real instrument.”

The rewards, he shares, still far outweigh the difficulties.

“Getting that magic moment where it all comes together in the band circle, or solo performance, is beyond words. Winning is always good, but the journey itself is simply amazing.

“And I love the personal bonds that reach all over the globe. The camaraderie and social aspect of the instrument – pipe banding in particular – is also huge highlight for me. I have a worldwide network of friends and have ticked off many a country or city visited as a result of playing.”

In 2005, Welsh moved from Scotland to Australia, before settling in New Zealand, where he now teaches and tutors both novice and intermediate level players.

“I have a real passion for getting new, young players into the art.”

“I run my own business from home; teaching bagpipes privately – both in person and via Skype, assisting bands, selling bagpipe equipment, and performing at various events.

“I am also the lead tutor for the Central North Island Youth Band, which runs teaching camps during school holidays here, and I have been a tutor for 10 years at the annual New Zealand Summer School, where I met the famous Simon Fraser University duo J. Reid Maxwell and Jack Lee.”

Welsh believes that the interest in the pipes still holds strong amongst the younger generations.

“In Scotland, the school band scene is flourishing. Here in New Zealand, there are pockets of phenomenal success, as there has been great implementations to the correct systems, mainly via private schools. It is all just a case of marketing it correctly. Getting new learners into the band, certainly in the capital city, is challenging because there are many other things a kid can do these days, many of which far less complicated than pipes, and therefore, less time consuming. But we do a pretty good job of keeping them engaged in that learning process once there and our retention rate is respectable for a small local band. Hard work and investing the time into a proper teaching program, plus the proper marketing of what we actually do, are great ways to keep the interest growing.”

Travel is in Welsh’s near future, with both trips to Canada and a jaunt to Scotland for the World Pipe Band Championships on the agenda.

“I want to bring back all that I learn from these trips to New Zealand and continue to challenge my own pipe band with new music. I also want to work on improving our own learner program, keep improing my playing technique and, one day, possibly re-enter the solo scene.”