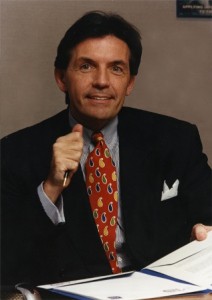 Dr. Geoffrey Scott Carroll is the founder of From Scotland With Love, the world’s largest Celtic fashion show that takes place this Monday night as part of Tartan Week celebrations in New York City.

What are your own Celtic roots?
I am from Peebles, Scotland in the Borders.

Why are those roots important to you?
Though the United States is now my adopted country, I believe that it is a mistake to forget where you and your family come from. I still have family there, and I go out of my way to maintain contacts back home.

What does it mean to you to be of Celtic heritage?
We Scots believe that we are different from others. This is certainly not a criticism of non-Scots, but my dearest and closest friends, even today, are all from Scotland. Many of them have left Scotland and created lives and careers around the globe. But there is always something between us that we share only with each other because of our backgrounds and heritage.

How are you involved with the U.S. Celtic community?
When I came to the U.S. about ten years ago, I thought there was an absence of groups trying to help young and talented Scots. There were many events and groups focusing on traditional events, but few that offered a helping hand to young Scots. I also found that the image of Scotland among many New Yorkers was distorted and focused on the past rather than the present. Prior to coming to New York, I spent time with my father before he passed away. He made me promise that I would help other Scots. As I have been fortunate in my business pursuits, I have been able to keep that promise. I was a founding member of the GlobalScot network and I started an event in my kitchen ten years ago, the Dressed to Kilt charity fashion show, which has become the biggest and most prestigious Scottish fashion event in the world. Last year was our tenth anniversary and we changed the name to From Scotland with Love. We have raised significant funds for noble and charitable causes and become a major fixture on the New York fashion scene and calendar. We have helped numerous young Scots – designers, manufacturers, entertainers, photographers, caterers – become established over here and provided them with commercial opportunities. I have helped arrange working visas for young Scots and provided financial support to Scottish organizations across the United States.

Why is it important to keep Celtic culture alive?
We have a proud and distinguished culture and a unique one. In a world where everything is becoming homogenized and the trends are towards sameness – in clothes, TV shows, movies, etc. – it is important to highlight the differences. Also, the world is growing at a rapid rate, and our Celtic countries are not. This presents obvious problems moving forward. Therefore, I think it important to highlight the relevance and importance of Celtic cultures.

In your estimation, are we doing enough to keep Celtic culture alive?
I’m not sure this is the right question. The more appropriate question may be, are we doing enough of the right and effective things to keep Celtic cultures alive? I believe there should be greater efforts to interest and engage younger generations in the culture. There are more than enough highland games or parades, but I have noticed a diminishing amount of younger generation support and participation. This was actually a big part of the thinking behind our Dressed to Kilt event and the event attracts many youngsters around the globe. Indeed, with the theme of this year’s show being The Scottish Lion Meets the Asian Dragon, we are trying to further share our Celtic culture with Asia.

What can we be doing better?
We could always do better, but I have nothing but respect for those individuals and groups that try to promote aspects of our Celtic culture.