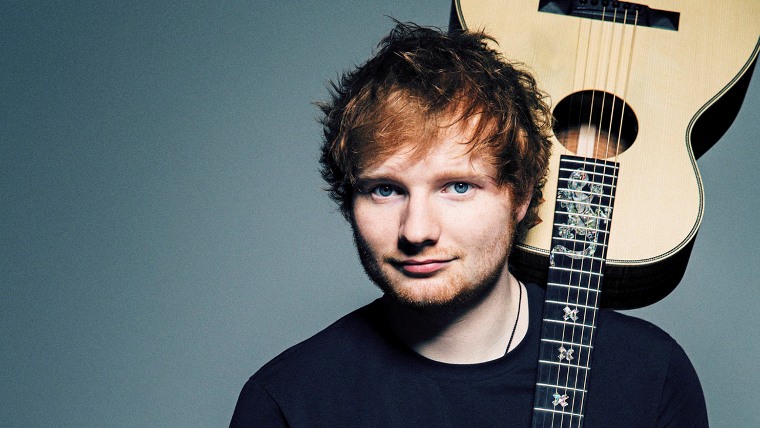 On his Irish roots, Sheeran, whose grandparents are Irish, said that trips to Ireland were always a part of his life.

“I come from an Irish family, spent most of my childhood summers and birthdays and Christmases in Ireland listening to trad music bands.” It is an influence clearly seen in much of his work today.

His huge hit at the moment is “Galway Girl,” not to be confused with the Steve Earle song of the same name.

“It was based on the fiddle player in Beoga, (traditional group) Niamh [Dunne]. She’s married to an Irishman, a friend of mine. I had the band in my house for an extra day so I was like, ‘what can I write about? She plays the fiddle in an Irish band… right, cool, let’s write a song about that.’ She inspired the first line but the rest of the song isn’t about anyone, I just made up a story.”

Sheeran was concerned that Steve Earle has a song with the same title.

“I actually tried to find another lyric. I did Wexford Girl and Clonakilty Girl and Cork Girl… none of 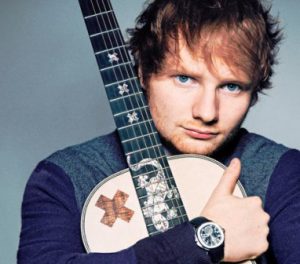 them worked. But the whole point of folk songs is taking inspiration from the past and making something new – so people will just have to deal with it.”

He says his grandparents hail from Gorey in Co. Wexford while his Galway cousin Laura Sheeran is also a musician. He makes sure to schedule some family time when he pops over to Ireland for a visit and was the guest of honor at Sheeran’s wedding in Spiddal.

The 26-year-old recently appeared on the BBC program ‘Desert Island Discs”, telling presenter Kirsty Young that appearing on the show, which many regard as a British institution, was “the peak of my career. It’s all downhill from here.” Interviewees are allowed to choose eight songs they could take with them to a desert island along with a copy of the Bible, the complete works of Shakespeare and a luxury item.

He described his luxury item as “very trivial” before revealing that he’d most like to take a bottle of ketchup with him as, “This is 100% the only thing I would need to survive.”

But if he found himself living on a desert island, he’d likely find it a bit of a disappointment compared to his previous life, telling Young, “I’m honestly in such a wonderful place right now and there’s nothing I would take away from it all.”

His life wasn’t always so easy, however. He admits he was a “bit of a weird kid” growing up in Suffolk in rural England: “I had huge blue NHS [glasses]… and a really, really bad stammer… Up until the age of 11,  I didn’t feel like I fit in anywhere.”

His stammer was cured about the age of nine when he was given Eminem’s “The Marshall Mathers” LP, which he thought was great because of the swearing. “I learnt the album back to back and he raps at such a fast pace that my stammer would go. That was the speech therapy that cured me.” 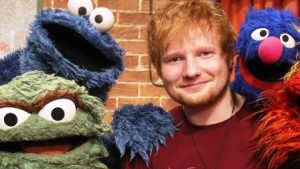 But his talent as a singer wasn’t apparent until much later; he quit the local Church choir because it was on at the same time as “The Simpsons” and admits that even when he was as old as 14 he was unable to hold a note.

Nevertheless, Sheeran first decided to become a musician around the age of 11 when he heard Derek and the Dominos play for Queen Elizabeth. He told his Dad, “I want to play guitar. So I got a guitar for Christmas and it was the first song that I learnt.”

He tries to write four or five songs in a day, describing it as, “No thought process, just get a guitar and write a song. 12 out of a hundred might be any good and that’s all you really need for an album.”

And if he’s feeling, then picking up his guitar is the first thing he does. “Anytime I’ve felt low, the one thing that picks me up is writing a song about it. As soon as it’s out of me on a song, I kind of move on.”

When he was just 16-years-old he left school and moved to London – mere months after being voted most likely to be famous by classmates at the Year 11 prom. He enrolled in a two-day-a-week course at a college of further education and the government grant paid for his rent. Within a year he was self-sufficient.

He says the fame that came with success was a strange thing to deal with. “You strive for normality. As soon as you find success, everyone starts treating you as supernormal because they’re going a bit over the top to show you everything’s cool. And then people start changing toward you, you start getting paranoid about it and then you basically get to a point where you have changed.” 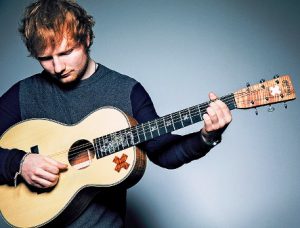 He still hangs out with the same group of friends he had since starting secondary school aged 11, and it was then he met his current girlfriend – someone he didn’t rush to talk about.

He skirted questions about his drug use, musing that, “I think all 20-somethings go through a certain experimental period and I don’t really feel comfortable talking about it because I realize I have kid fans… You skip in and you skip out and I’m out the other side.”

And as for the future, he remains upbeat no matter what the world has in store for him. “I’ve achieved more than I ever thought I would so if it does end tomorrow it’s a really good story to tell the grandkids.”