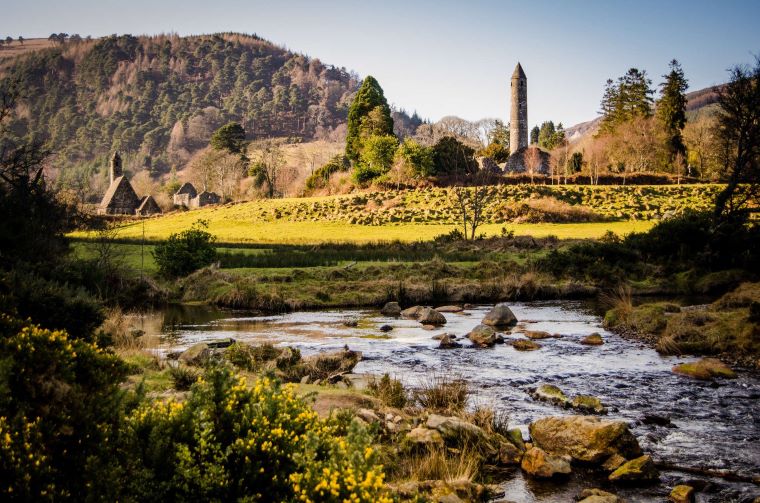 At first glance, the east of Ireland is pretty; lush green fields and hedgerows dotted with busy little towns and laced with gentle rivers and framed by the Irish Sea. But ask the locals for a story or two, and then look again, closely. This is a landscape full of secrets, where memories are long and filled with tales of battles and betrothals, of stars and the spirit world, of wealth and sometimes wickedness.

This eerie land has inspired magic, myth and ritual for thousands of years. The Boyne Valley in Meath holds a wonder that’s older than the pyramids of Giza. At the Brú na Boinne Visitor Centre try to unpick the puzzle of Newgrange, the passage tomb built to line up with the first rays of sunlight on the winter solstice; and the equally incredible burial mounds of Knowth and Dowth. Loughcrew is another scattering of megalithic tombs aligned with the heavens, whose exquisite, intricate rock art only deepens the mystery. Pagans weren’t the only ones to sense the divine in Ireland’s Ancient East. Christian saints inspired tough monks to build communities, pass on their learnings and create astonishing illuminated manuscripts that still take your breath away – the precious and intricate Book of Kells, which is on display in Dublin’s Trinity College, illustrates the brilliance of these holy messengers. Glendalough, founded by St Kevin in the 6th century, nestles beside two lakes in Wicklow like a cup in a saucer, protected by thick woods and high, but very walkable, crags. The ruins of Wexford’s Dunbrody and Tintern Abbeys are still in spookily good shape, haunting the landscape with their ghosts of once bustling hubs. Meanwhile, a story of another era unfolds at a replica of the three-masted barque in Dubrody, which turned from cargo vessel to famine ship, aiding starving families fleeing for the new world. A short distance away, more recent history unfolds at the Kennedy Homestead, charting the life, times and ancestry of one JFK. 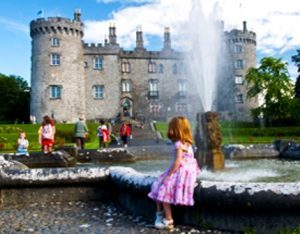 There are places in Ireland’s Ancient East where it seems the rich became peacocks, showing off their power, and building fabulous houses that seem designed to intimidate rather than welcome guests. Castletown in Kildare was erected by super-rich speaker Conolly; Wicklow’s Russborough House, home of the wonderful Beit art collection, is a masterpiece of Palladian architecture that has played host to a glittering list of celebrities, including Fred Astaire and Mick Jagger; and Powerscourt Estate, overlooking Wicklow’s Sugar Loaf Mountain, is adjoined by mini-Versailles pleasure gardens, a Japanese Garden and has its own waterfall just a short drive away… all vast houses with scent-filled gardens that boast as well as beguile you to explore. All that power could turn someone nasty. Think of 13th century Rohesia, the wealthy widow who commissioned Castle Roche and then pushed the builder to his death to preserve its secrets. Or the bitter, half-mad Earl of Belvedere, who locked up his wife, ruined his brother and built a ‘jealous wall’ to hide the sight of another brother’s luxury house next door. There are inspiring tales, too. Do you think you could ride a horse, become an expert marksman or paint without arms or legs? Arthur MacMurrough Kavanagh could. Born to a wealthy landowning family in Borris House, Carlow, Kavanagh overcame the most impossible odds to become a horseback messenger for the East India Company in the 1850s. His job led him to the Middle East and Eurasia, before returning to Ireland to became a politician and landlord. Inspirational.

Even more wild and bloodied are the histories of the castles that loom large over the landscapes. Whether it’s 12th century Trim in Meath, which starred in Braveheart; ghost-filled Leap in Offaly, with its secret dungeon where prisoners were walled up and left to die; intriguing Birr, also in Offaly, where the science-inspired Rosse family built what was once the biggest telescope in the world back in the 19th century; Kilkenny, as it stands watch over the city’s cobbled streets that stretch out over its medieval mile; or 600-year-old Blarney, where just one little kiss will earn you the gift of the gab, there’s always more to these imposing structures than just bricks and mortar. With some, though, the stories go further back than the castle itself. At the Rock of Cashel in Tipperary, centuries of years of history sweep through this collection of medieval buildings, which includes a chapel, cathedral, round tower, high cross and a castle. It was here that Saint Patrick converted the King of Munster to Christianity in the 5th century, where the saint accidently pierced the King’s foot with his crozier. The King didn’t object to the pain, believing it to be part of the ceremony!

With any destination, it’s not all about the places you visit and the stories you hear. It’s about the story of your journey, the dishes you’ve dined on, the pubs where you’ve tapped your feet to the beat of an impromptu traditional music session. It’s about the festivals that pop up in cities, towns and tiny villages, and on top of hills and in valleys – all celebrating the love of the legends, the arts, the music and the laughs to be had around here. Walk these ancient paths, climb these quiet hills, stick around for a while and look out over the land. Listen to the wind, the stones, the trees and the water. Listen hard, and maybe you’ll catch the whispers of centuries past.