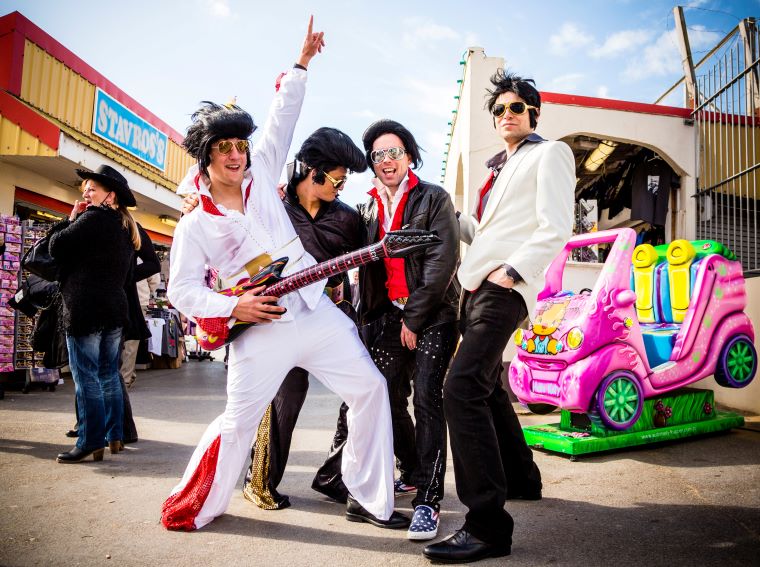 Some sources claim that he has Irish blood. Others say that he is of Scottish descent. So why is the biggest Elvis Festival in the world held in a sleepy seaside town in Wales?

Though it is difficult to confirm any Welsh connection, it is said that the name Presley comes from the Preseli Mountains in the country’s plush western region. Whatever the truth, thousands of Elvis fans converge on the little town of Porthcawl in South Wales each September to celebrate the life and music of the King of Rock & Roll.

Founded by a television company in 2004 for the making of a one-off documentary film, the festival was never intended to be a recurring event. Yet, 15 years later it continues to grow in both size and scope; this year, over 800 Elvis look-a-likes and tens of thousands of visitors are expected to attend the annual gathering, doubling the population of the usually sedate retirement town.

“Fifteen years ago, we had no idea that this would result in 40,000 descending annually on Porthcawl,” shares organizer Peter Phillips. “In hindsight we should not have been surprised; Elvis remains the most iconic entertainer of the last 100 years and Wales loves a good party.”

With hundreds of events taking place over the course of the weekend, the entire town turns wall-to-wall Elvis.

Bars, stores, restaurants and even chip-shops all get into the swing of things, decorating their premises, hosting contests and competitions – be they official or unofficial – and holding impromptu celebrations of all sorts and styles. 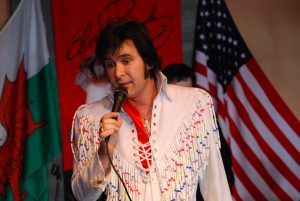 The official shows take place in the Grand Pavilion – a magnificent 1930s music hall situated on the seafront, with spectacular panoramic views across the Bristol Channel.

The Hi-Tide, once a beach shop during the 1940s, is now a lively music venue with four bars and outside seating. It is also the official sponsor of the Porthcawl Elvis Festival, hosting upwards of 50 Elvis Tribute Artists (ETAs) who perform more than 100 shows over the course of the weekend.

‘The Best Elvis’ Competition is staged in two parts; the first is held on Friday afternoon, while the second is scheduled for Saturday afternoon, later followed by the Grand Final.

‘The First Kings’ contest features the Elvis Tributes Artists who performed at the original event, which is then followed by a performance by Rob Willis, the 2018 Best Festival Winner.

Sunday will feature three concerts; the extremely popular ‘Elvis Gospel Show’; Elvis Orchestrated’ – where world’s premier ETA Kraig Parker will be performing with the prestigious Cardiff Philharmonic Orchestra – all followed by the swingin’ sounds of the fabulous Graceland Band with Mills & Boone.

Throughout the gathering, close to 20 alternative venues around town host a “fringe festival” – events that are not part of the official program, including a Pricilla Presley beauty contest.

Of course, locals and visitors get right into the spirit of things; fans of all ages and genders don Elvis jumpsuits and black wigs with signature hairdos, while ladies in 1950s dresses and coiffed bobs teeter on stilettos. Gold lame, boots and army uniforms are in abundance also. The town is full of elderly people gyrating in the streets. Young people – all of whom weren’t even born during Elvis’ lifetime – act as though they have always been part of the mania. Even dogs proudly sport their lame coats and polka dot bows. Each pay tribute to The King in their own way.

Festival organizers say it all works thanks to the idiosyncratic Welsh mentality, and that it most likely couldn’t happen anywhere else. ~ Story by Beryl Johnson