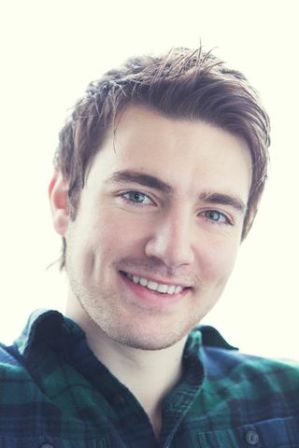 With his days of Celtic Thunder behind him, Irish tenor Emmet Cahill steps forward with a debut solo recording and tour

Despite his recent decision to pursue a solo musical career, Emmet Cahill knows the importance it of having good people around him.

“I have been very blessed in that regard,” explains the 24 year-old over the phone from Dublin, where he is preparing to hit the road. “First, growing up in the family that I did, and later, during my time with Celtic Thunder.”

Of the latter, the Mullingar, County Westmeath native has only the fondest of memories.

“Great guys, great fun, great experience,” he says with a smile. “Did I mention it was great?”

Sadly, those good times were tempered last year, after the untimely passing of the group’s elder statesman George Donaldson.

“I miss George beyond words, and not a day passes that I don’t think of him,” Cahill says of his fallen comrade. “He was the big brother of the group, always looking out for us younger guys with a kind and encouraging word. He was always good for a bit of the craic also; you were either the butt of his jokes or you were in on the joke – it was endless.

“The last time I saw George was in Glasgow a few weeks before he died. We took in a football match together and hit the pub for a few pints afterwards. It never mattered if we hadn’t seen each other for a few weeks in between shows or tours, we always just picked up right where we left off with one another.”

Donaldson’s death had a similar impact upon the band’s other members.

“We were all shattered by the loss,” shares Cahill. “The guys, the crew, management, the fans, everyone – we are a big family, and the passing of a family member is almost unfathomable. I remember thinking after sometime had passed, how can we possibly go on? It will never be the same without George. Somehow, we came together to support one another at that time, and in the months that followed, and we healed from the experience. We moved on, and I know that is what George would have wanted.”

Cahill points out that his own decision to move on from the Irish supergroup was strictly personal.

“It is something I had been thinking about for awhile, actually, and after speaking with a number of people about it, I finally made up my mind to try something new. It had absolutely nothing to do with George’s passing, or anyone or anything to do with the band in any way. I loved and cherished every minute of my time with Celtic Thunder, and I would never rule out doing it again down the road.

“When I joined the band I was nineteen years-old,” he continues. “Before that I had been pursuing my own musical career so, in a sense, doing this is simply coming around full-circle.”

Encouraged by his father to take music lessons at the age of four, Cahill earned a prestigious Schola Cantorum music scholarship during his high school years. After graduation, he attended the Royal Irish Academy of Music for formal classical voice training. The studies soon paid off, with the singer picking up a number of impressive accolades in the years to follow, including the RIAM Promising Young Singer of 2010 Award, and the John McCormack Young Tenor Award. And, in 2013, he was voted Tenor of the Year by The Irish Music Association in the United States.

“It is always great to be recognized and supported by your peers,” he acknowledges. “To be truthful, those honours probably deserve to go to my teachers and my family more than myself. Mostly, I just kind of showed up and followed their direction and advice. I mean, if it weren’t for them, I would not be where I am today.”

All modesty aside, Cahill hopes to capitalize on his good fortune in the months and years to come.

“I toured the US over the summer,” he says, noting dates in Florida, Texas, California and elsewhere through July and August. “These were smaller, more intimate venues, which worked well with the show I have put together.

“Basically, it is just me and a guitar and piano,” he says of what audiences can expect. “I will mostly be performing classic Irish tunes by singers that I grew up listening to – people like Frank Patterson and John McCormack – but there will be a few musical surprises also.”

There will likely be more than a few stories to tell on stage as well.

“Well, I am Irish,” he laughs. “We are known to have the gift of the gab, right? Actually, that is something I learned from my experiences with Celtic Thunder; how important it is to connect with audiences. They are just as much a part of the concert experience as the performer. That give and take of energy is an essential element, and storytelling is a great way to make that happen.”

The tenor’s four-year tenure with Celtic Thunder afforded him other important lessons also.

“I went from being a teenager, fresh out of classrooms and lecture halls, to adulthood during that time. In that way, Celtic Thunder was a soft landing of sorts; I learned first-hand that there is a big difference between theory and real-life, especially in the music business, which can be very trying at times. Being on tour, in particular, has its own challenges; all the little things that you might take for granted at home – eating properly, getting regular exercise, sleeping well – those are the things that you really need to pay attention to when travelling.”

Being on the road is not without its rewards, however.

“I love it,” says Cahill. “Visiting other parts of the world, seeing new sights, exploring new cultures, trying new foods – it is a great life that way. The best part, for me – and I know the other guys felt this way also – was meeting so many amazing people. I’ve made wonderful friends around the world, people that I will know for the rest of my life.”

The Irish connection, he notes, is always present.

“Being out there really opened my eyes to the impact and influence of our culture. It is simply mind-boggling to see that our little island has produced music, dance, literature and other arts that are known and loved around the world. I have met people who have absolutely no Celtic roots or ties whatsoever, and are as knowledgeable and passionate about Irish music as I am.”

Cahill will continue to contribute to those customs with his first solo recording, expected later this year.

“It is still in the early stages,” he confides, “so I am not going to talk about it too much just yet. I’m very excited about it, though, and for me it really is a big step towards establishing my own voice and career.

“I know how tough it can be to start something new, though. Thankfully, I am not quite starting from scratch; I can draw upon my own experiences, and I’ve got the love and support of good people around me.”