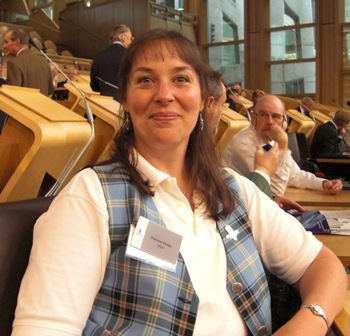 What are your own roots?
I am mostly Scottish, and have traced blood ties to 8 clans (so far), with a little Irish thrown in.

When and why did you get involved with this event?
I attended this event, in my Clan Bell tent, it’s very first year, back in 2002, and have been on the steering committee ever since. I believe it is important to keep the essence of this event as Scottish/Celtic as possible, and I thought the best way to do that was to assist where I could in making our festival happen each year.

Why is it an important event for the community there?
It is the only annual Scottish festival in our county.  The Oregon Territory’s first white inhabitants were Scottish Trappers/Traders who taught Gaelic to the local tribes they traded with. Gaelic was the first European language spoken here before English took over as more Anglo people came this far west. My own ancestors were among those early pioneers. None of this is taught in school, so I feel it is our responsibility as the descendants, to pass along the heritage & history of this area to those living here now.  The Eugene Scottish Festival is one fun way to share that knowledge.

Who attends the event?
Mainly those in the Santa Clara/River Road area enjoy this event, but we do get visitors from Eugene, Springfield, and farther afield as well. It is very easy to find, located one mile north of Beltline right on 3060 River Road. Also, being held on May 17th, it is early enough in the season to not conflict with other events in the surrounding area.

What can they expect this year?
Lots of excellent local musicians who specialize in the music of Scotland, Ireland and other Celtic nations, will be among the day’s entertainment. The Firefighter Pipe Band, a local choir called Kitchen Ceilidh that sings traditional Gaelic songs, and our annual dog parade will be some fun things to look for during the day. If you bring your dog early in the day, you can attend the dog parade too!

How else are you involved with the Celtic community there?
I am also the Oregon Commissioner and Western Regional Vice President for Clan Bell North America, and as such, I attend other Scottish events throughout the area where I host the Clan Bell heritage tent. In past years I was a Scottish Highland dancer, and before that, a side or tenor drummer for a local pipe band, and for a few years in the late 80’s, was a British Medieval Archaeologist based in York, England, and spent my weekends in Scotland & “the Borders” region. I’m still educating Oregonians about Scottish history, heritage and archaeology through my work with the clans I’m related to – currently working for Clan Bell.

Is enough being done to preserve and promote Celtic culture generally?
It is sad to see the economy take its toll on the Scottish festivals & Highland games, and it is even sadder to see those volunteering in the clan tents aging and retiring with few younger representatives stepping in to take over & preserve our common Scottish heritage. This aspect of history is not taught in schools, so the younger generations do not see America valuing the history of our ancestors. Only those children who grow up being taken to the Scottish events every spring & summer, or the fewer still who travel to Scotland to see our history for themselves, place any value on our shared culture and past.  Some even attribute their awakening of interest in Scotland to movies like Rob Roy or Braveheart – that’s great! I’ll take it!! Anything to get that ball rolling! Then I carefully explain that Braveheart was a “story” written by Randall Wallace, a descendant of William Wallace, for his kids, & that the princess would have been 3 years old when William Wallace died, so the “facts” are somewhat altered in order to pack more components of Scottish history into one really cool movie. Once that spark of interest is ignited, then the passion of learning about our past takes over!

What can we be doing better?
I have found that the things that ignite interest in our culture are as varied as the people themselves.  Some love the heavy athletics or caber tossing in specific, others develop a passion for Highland dancing or Irish step dancing. Some collect Celtic tattoos to express their Celtic pride, while others become pipers! That’s the thing about life & culture, it is a journey of individual discovery.  What interests me might bore you to tears … therefore all aspects of heritage, history, culture, travel etc., need to be celebrated! You never know when that one elusive thing might become the key to making a person become suddenly aware that “I AM CELTIC!”