Find Your Way Home ~ The Musical

Set in Ireland in 1910, Find Your Way Home is a musical drama that follows an Irish family through triumphs and tragedies. Recently we spoke with co-creator James Kelly about what audiences can expect when the production makes its American debut in the coming weeks.

What are your roots?
I am Irish American with 3 of my Grandparents from Ireland – Galway, Longford and Kerry. I currently live in Albany, NY.

When and why did you start playing music?
I started because it was always around me and I loved it. My father had a band “The Galway Blazers” that I would go see and play the spoons on the side of the stage. My mother had an Irish step-dancing school and sings and played the violin. I started playing music professionally in The Catskills when I was 17.

Are they the same reasons you do it today?
Absolutely. It is not an easy thing to make a living playing music so you have to love what you do. I am fortunate to wear a few different hats as I am a guitar player/singer for some gigs, drummer/singer on others and sometimes I am songwriter/producer. I was fortunate to have 8 of my songs recorded last year by Daniel O’Donnell, Ronan Tynan(I wrote 2 songs including the title track “Atlantic Sky” and coproduced the record), Sean Keane, The New York Tenors and Andy Cooney. 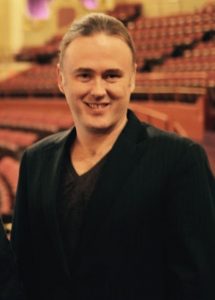 How have you evolved as an artist since that time?
I moved to Nashville when I was 23 for 8 years and spent that time surrounded by legendary songwriters learning the craft of songwriting. When I hear my early original material, I notice a difference now in rhyme, chord choices and basic approach. I think you develop a filter and an efficiency when you spend time around hit writers and I’ve been lucky enough to write with several “No. 1 Hit” writers including Pat Alger who wrote many Garth Brooks hits (Unanswered Prayers). I remember him saying “Show me, don’t tell me” when it came to lyrics and that has stuck with me.

What are the challenges involved with the vocation?
Writing a musical is very different from writing a song. It’s actually 17 Original songs. Jeff Strange and I started “Find Your Way Home” 8 years ago. He is a musician and a novelist and had the idea to write an Irish Musical and knew that he wanted 1910 in the west of Ireland. He had the shell of a story and a few songs started and brought the idea to my kitchen. We started it that day and it took almost 3 years to get a finished version – 5 or 6 days a week, for 6-8 hours a day. When we first finished it, we realized that it was almost 6 hours long! After many revisits, we had it down to the magic 2.5 hours and that includes a 20 min intermission. The challenges have been financial and in the getting 24 people over from Ireland and setting up housing, meals, transportation, etc but it was been a wonderful community experience with so many helping with the heavy lift. The Irish American Heritage Museum has partnered with us and Hope House Ministries have been crucial to making this all happen and we are donating part of the proceeds to them.

What are the rewards?
Jeff Strange and I have been smiling ear to ear for 8 years because of this musical The rewards are people getting to see it. We had a review from The Irish Times at our debut in Dublin at The Civic Theatre.”There was an amazing cast, fantastic musicians and a wonderful score. Quite simply it was magical, powerful, poignant and very very entertaining. I have no doubt it will be a huge success. Can’t wait to see it again” Vivienne Clarke/ Irish Times If that’s not a reward, I don’t know what is. We just want to get it out there and these 3 “One Night Only” performances are going to be Incredible! We have Alex Sharpe formerly of “Celtic Woman,” Christin Scarry (Michael Collins The Musical) directing and David Hayes (Riverdance/The Voice Of Ireland) as Musical Director. We are very fortunate to have such a wonderful group coming over from Ireland for this and we want to show our appreciation and pack these houses. One review said that “Find Your Way Home” is like “The Quiet Man meets Our Town with a dash of Les Miserable.” How cool is that?

Is your creative process more ‘inspirational’ or ‘perspirational’?
I would say inspirational but you still have to make the time and put in the hours. Jeff and I spend most of the writing time just pacing the around my kitchen and bouncing ideas and running with them so maybe a bit of perspiration too.

What makes a good song?
I think that a good song is one that stirs a reaction in the listener. Whether it makes you want to dance, laugh, cry or just crank up while you’re driving. Then there are songs that go beyond that. I remember making cassette copies of “Broken Road” to play for friends 6 years before Rascal Flatts recorded it because I heard the writers sing it at The Bluebird Cafe in Nashville and was that blown away. 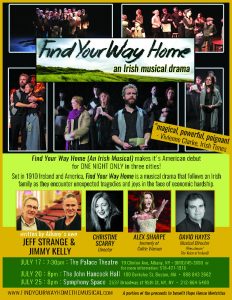 What has the response been like so far for ‘Find Your Way Home’?
We received standing ovations at both shows in Dublin and grown men hugging with tears in their eyes and teenage girls with running mascara upset that they couldn’t find the soundtrack on Spotify. And – to top it off – a review from the Irish Times. Jeff and I are bursting with excitement to make our American Debut!

What can audiences expect on the US dates?
A full performance from almost an entirely all-Irish cast with an incredible 5 piece band. The energy of the cast is undeniable and some are coming to America for the first time. They have put their hearts into this and we are 8 years in the making. We are reaching out to the Irish community for their support but I promise it will be an unforgettable evening for all involved.

What do you have on tap for the rest of 2017, and into 2018?
The cast flies home on July 26th and then we regroup and see what the next step is. Jeff Strange and I are “all in” and boldly taking the “If you build it, they will come” approach as there is no real roadmap to get a musical to the next level. I see a documentary in the works of the journey so far but our focus is the big stage for “Find Your Way Home (An Irish Musical).”