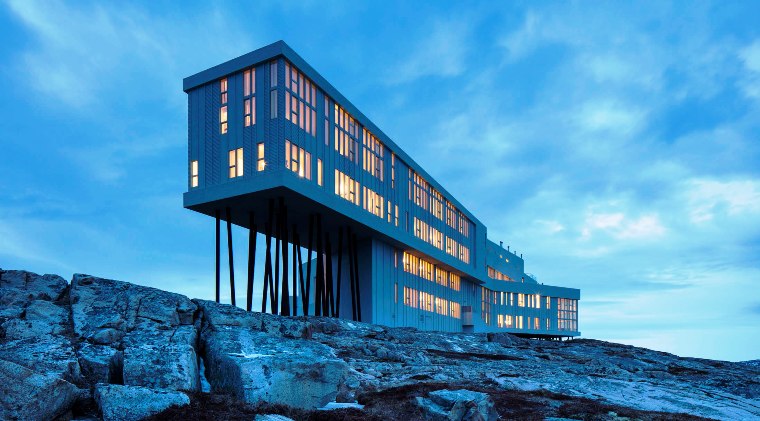 Wind-swept, salt-sprayed and architecturally-dramatic, Fogo Island Inn is a beacon for travelers who aspire to unique experiences, international chefs and delightful epicures.

For six glorious weekends this fall, chefs from Scotland, the United States and Canada will look for inspiration in the bounty of land and sea off Newfoundland’s northeast coast. Foraged seaweed, wild berries and caribou sausages will fuel their culinary adventures, though it is line-caught cod that will occupy pride of place.

Coaxed from the sea as it was in the days before massive trawl nets, Fogo Island cod is world-renowned for its texture and taste. 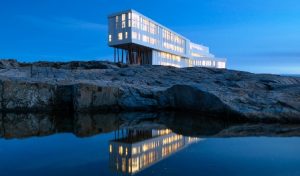 It was cod that brought the first settlers to the rugged island in the 1600s, and the inn’s architecture pays homage to the wooden fish-drying stages that graced the shoreline for centuries. With its floor to ceiling windows overlooking the wild Atlantic, the facility is a testament to the strength of spirit that has endured on the islet after other isolated outport communities were closed out in the 1960s. It was during that uprooting – designed to consolidate a population that had spread out along the winding coastline – that Newfoundland’s Memorial University and the National Film Board collaborated in a legendary community film-making exercise, The Fogo Process. It gave a voice to the outport community’s efforts to survive the devastating loss of the inshore fishery, and began a long association between the island and film.

At the time, Zita Cobb was a young child, the only girl among seven siblings growing up in the Fogo Island community of Joe Batt’s Arm. Raised in a home without electricity or running water, she left the island to attend university, later earning a fortune as a high tech executive. When she returned in 2006, Cobb, along with two of her brothers, established the Shorefast Foundation, a registered charity, with the objective of rejuvenating the local economy “in ways that work for local residents, rather than against them.”

With the help of Norway-based architect Todd Saunders, a native of Newfoundland himself, Cobb built a 29-suite hotel with a theatre and other amenities for tourists seeking a world-class travel and cultural experience.

Things are done differently at Fogo Island Inn; wood is used for heating, furniture is hand-crafted, beds are decked in traditional quilts, and visitors are offered a half-day tour with a community host.

The facility’s kitchen is also unique.

“We have a kitchen collective of about 26 people, every one of them a part of our team,” shares executive sous chef Tim Charles by phone. “The focus is not on the chef, it is on the team working together. It means that all of us take great pride in what we produce. Like anyone preparing for company, we are planning to offer our best.”

Charles has been at the inn since before it opened for business. 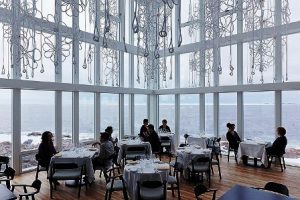 “We have seen the interest in these weekends grow to the point we could consider offering more, and now we are up to seven culinary seasons. Autumn is Berry Season, and the weather will be wonderful, so we are going to showcase the beauty and bounty of Fogo Island.”

In early November, Chef Michael Howell is presenting a Fogo Island version of Devour: The Food and Film Fest, first founded in Nova Scotia. He and Thomas’ kitchen collective will collaborate to match flavourful dishes with a series of six short films shown in the inn’s cinema.

“I have already been introduced to Fogo Island’s line-caught cod and I am looking forward to experiencing it where it is caught,” says Howell. “We had a number of films made on Fogo Island at last year’s Devour festival in Nova Scotia, so to be on Fogo for food and films will be hard to beat.”

Howell spent 10 years as an actor and director, and a subsequent 20 years as a chef and restaurant owner, so the touring festival is “the great passion of my later years.”

“I am always intrigued by uber-foraged ingredients, so I am excited to see what comes from a very beautiful, self-contained culture on Fogo Island.”