Galway in the Rain 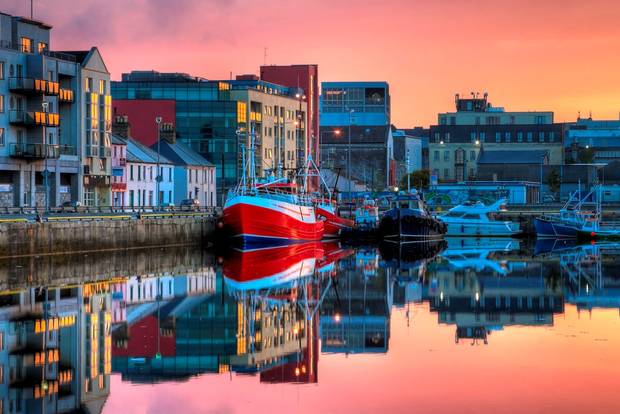 Someone who undoubtedly had mixed a pint of stout with a shot of Crème de menthe once suggested that Galway is the Paris of Ireland.

Galway City has long represented an alternative for people to the rackety, pressured life of Dublin. The reputation that the city has of having a laid-back atmosphere is accurate: musicians and writers have traditionally found in Galway a place well attuned to their spirits.

Drop into Charlie Byrne’s Bookshop, located on one of Galway’s quiet, medieval, streets on a Saturday morning. Trip over the history professors browsing the new deluxe editions and, deeper into the shop, in the second-hand section, meet the hungry students vigorously thumbing books, the budget for which they have regrettably drunk. The whole shop rises to rafters with accumulated knowledge, recondite books, great classics retold in Irish for children and a repository of Connemara poetry and song now thankfully collected and available to the public. 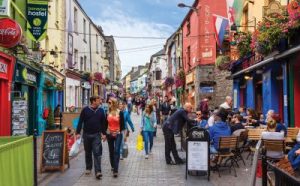 Walk along the narrow streets of Nun’s Island—where James Joyce’s future wife, Nora, was reared—that leads to Galway’s imposing Catholic Cathedral. Cripplingly expensive and ostentatious, and partly built with funds from the Diocese of Massachusetts, the cathedral was out of step with the people when it was erected in the mid 1960s.

The President of Ireland, Michael D. Higgins, is an honorary Galway man. Though his roots are in County Clare, it was in Galway where he lectured on politics and sociology, where he was returned as a TD in General Elections and where he appreciated the need for an Irish language television channel which he helped to steer through the Dail. Galwegians do not forget his contribution to their city and county. One of his more noteworthy students at NUI Galway, the lyricist of The Saw Doctors, wrote a song about it: “We got Michael D. rocking in the Dail for us/ Michael D rocking in the Dail”—which can be rewritten, now that Michael D is rocking in the Aras.

The secret of Galway’s success is its university. Galway has an ever expanding, fully functional, twelve months a year (with facilities for summer events to fill the university summer hiatus), self-respecting university that is the de facto destination for students all over Connaught and beyond. It has become the dynamo of the city whose population is 75,000, more than a quarter of whom are students. Cork is sustained by enormous pharmaceutical plants and Dublin today has 40% of Ireland’s Gross Domestic Product. But an exposed, wind-swept city like Galway needs a solid stay against economic instability, and that is what the National University of Ireland in Galway has become. NUI Galway also brings students from as far away as Donegal and Derry in droves. As Donegal historian, Breandán Mac Suibhne, put it:  “The burghers of Galway cannot believe their luck. They now have a public holiday, Donegal Day, to celebrate money being spent on the Corrib that might be spent on the Foyle.”

The citizenry, businesses and organizational committees of Galway are working hard to secure the city’s bid for the City of Culture award in 2020. A perfect vision. Galway is certainly a contender: its music, film and theatre and scenes are growing and deserve to be bolstered by the investment and attention that such an accolade brings. Galway can and should look to Derry’s City of Culture 2013 successes and learn from its organisational mishaps. Unlike Derry, when it started in its bid, the facilities are already built in Galway to nurture music and theatre talent as Garry Hynes’ theatre legacy in the Druid  particular and the consistently good gigs at The Roisin Dubh attest. In film, however, Galway needs more support. While the Galway Film Festival is very notable and the Irish Film Board is co-headquartered in Galway, in practice most of the film board’s business happens in Dublin. A new studio is under construction in County Galway which is promising; the success of films such as Poitin and Calvary, show that the west of Ireland deserves to become a de facto definition for film production. That requires money. Galwegians could put film at the centre of its agenda for artistic growth. 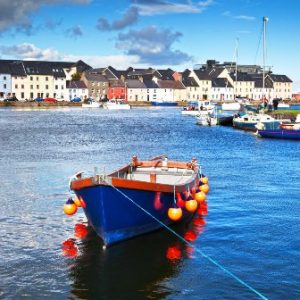 Over the past decades the Galway pub that has not renamed itself, translating from English to Irish, is the exception. “Fox’s Pub” became “Tigh Fox” and so forth. The propensity to name one’s business in the Irish language was not attended by a growth in the routine use of Irish. It was, instead, a very successful tourist lure: traditional Galway, last bastion of Ireland’s ancestral culture, lore and language etc. Galway became more intensely associated with the trappings of the Irish language even while it became less the home of the language itself. That is unfortunate for the town. Similarly, the handsome statue of Pádraic Ó Conaire, once the centerpiece of Eyre Square, has been transported to Galway City Museum, substantially less in the public’s view. Ó Conaire’s brilliant short stories in Irish are now read less and less; his disappearance from Galway City’s main park is sadly symbolic.

Watch the way in which the buskers enliven Shop Street with their amazing array of instruments, blending Irish trad with African beats and Guns n’ Roses. Their guitar cases fill up coins, their CDs do not sell. They get the passing public’s attention but short shrift from the elements as they need to pack up again—rain. While some parts of Ireland have four seasons in one day, Galway is capable of four seasons is a quarter of an hour. The gentle drizzle besets the city yet again. It rains in this city almost 300 days of the year. But I love Galway in the rain.