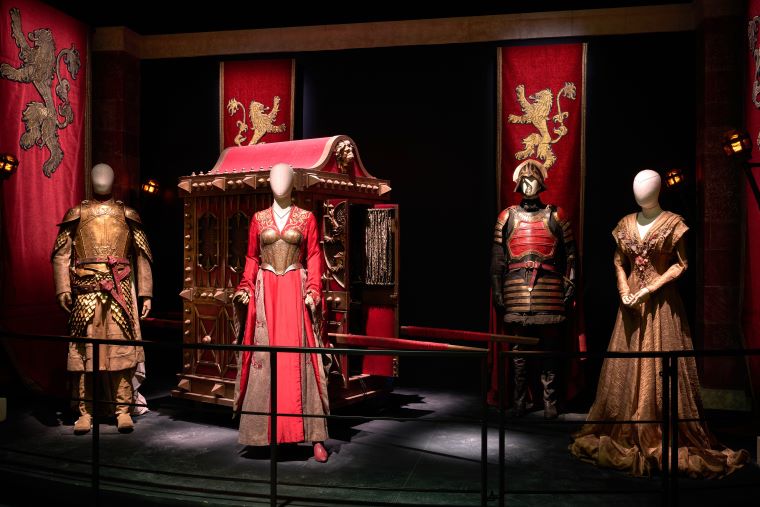 Whether or not you are a fan of Game of Thrones, there is simply no denying that the blockbuster HBO series was – and remains – a juggernaut of the zeitgeist. Even the places where the series was shot over the show’s 8-year run have continued to thrive as mega-fan pilgrimage hot spots.

“Because of the overwhelming success of the series, fans have been flocking to the filming locations for years,” shares Brad Kelly, general manager of the recently opened Game of Thrones Studio Tour in Banbridge, Northern Ireland, just a few miles southwest of Belfast.

Kelly, who has been in the business of visitor attractions for the past decade, previously plied his trade at the live-platform Dr. Who Exhibition in Cardiff, Wales.

“You can’t replace the magic of visitors coming from all over the world to that specific place, because they just want to be immersed in the world they are immersed in when they are watching the show on their screens,” he shares. “When Game of Thrones Legacy Attractions were announced a few years ago, and manifested themselves into this, it was an ideal situation for me to get involved with.”

Game of Thrones was filmed in a number of locales, both across Northern Ireland and around the world, but one of its key production meccas was a reclaimed linen facility just outside of Belfast.

“Linen Mill Studios was an old bleaching building. That industry went offshore about 12 years ago, just before HBO started to look around for studio facilities. Obviously, with such a vast production, you would need more than one production facility. This space was adapted into filming studios.”

With Game of Thrones over, the building – as well as a treasure trove of sets, props, and costumes to rival even the Lannister’s fortune – lay unused. Rather than mothball it all, however, they were repurposed into a tourist destination for fans of the series. 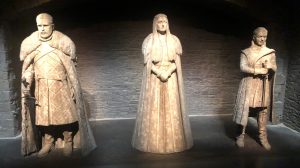 “A couple of them are pretty much in the same footprint as they were when production was rolling,” says Kelly, himself an admitted fan of the franchise, pointing out that the Winterfell section remains unmoved from where it originally filmed several key moments throughout the series. “When you walk into that room of four walls, it’s not missing a fourth wall that the camera comes in from.”

Other key locations from the series that visitors can now experience first-hand include King’s Landing, the land of the north beyond The Wall, and of course, the Iron Throne itself.

“That is the hero moment – when you sit on that throne and momentarily get to rule the Seven Kingdoms.”

The experience isn’t just for GOT die-hards, however – Kelly says it appeals just as much to visitors who have never seen the series as they can enjoy a behind-the-scenes peek into how a grand and cinematic television show like Game of Thrones gets made.

“You will see, stage-by-stage, the story behind the production; how the costumes were designed, how motion capture was used to create different scenes, a display of weaponry and props and the story of the weapons master and what goes into that design process.

“I love that our staff members and tour guides have been extras on the show,” continues Kelly. “Because the cast was so vast, and obviously the filming was here, the local population was very much involved. Many of our staff have their own unique stories and anecdotes from behind the scenes that add a personal touch. You’ve got a perfect storm of fans with the appetite to consume more and experience that live platform, and the right people to deliver it.”

While the show was certainly adult-themed, the tour is more than appropriate for kids of all ages – something that Kelly himself can vouch for.

“I brought my seven-year-old godson to some pre-launch events. He has never seen the show, but he was blown away and has not stopped talking about it since.”

And while the COVID-19 pandemic did delay the opening of the facility somewhat, Kelly says that the difficulties of getting the doors open were counterbalanced by the advantageous timing of opening right as lockdowns ended.

“That is a challenge and an opportunity in itself – to be at the vanguard of tourism returning and growing. It is a great time to launch because you’ve got that appetite for people to go out and do stuff. There are a lot of bookings from 2019, pre-pandemic, being transferred over. As tourism comes back, we are a new product on the landscape.”

He figures that the facility will still be around by the next time winter comes to Westeros. For one, it adds a whole new dimension to the potential tourist markets in the region.

“Game of Thrones has – literally – become part of the landscape. To create that live platform for people to get another hit of the show is kind of a down-stream product of our film industry. And what’s fantastic about using a region like Belfast – rather than somewhere like London – is that is totally fresh and unique. And it creates another identity. This region has lots of ancient history, and it has a fantastic, thriving tourism industry through that. But this creates another completely different identity.”

And the fandom itself fuels interest in the experience, Kelly muses, looking at franchises like Harry Potter and the Marvel Cinematic Universe as examples. So even if the story of Game of Thrones is over, the story of its fans is not.

“Game of Thrones had such an impact. It is still on television, in terms of repeats and everything. So, you are going to have that constant flow of new audiences finding it.

“With what we have on display here, one of the challenges when it was being designed was not what to include, but what to exclude. This is a massive facility, but it was an even bigger production. So as this grows, we can add additional sets, and extend the experience, as that appetite grows. It just becomes a tourism mainstay.”

That said, a dearth of new stories probably won’t be anything to worry about in the immediate future.

“You’ve got a new production, a spin-off happening, so development of the story expands and builds continually,” says Kelly. “We don’t know where that is going to go yet – that might be a continued story arc that may go on for many years.

“The narrative never really goes away – it will exist in some form or another. And this studio tour will contribute to the continuation of that story.” ~ Story by Chris Muise