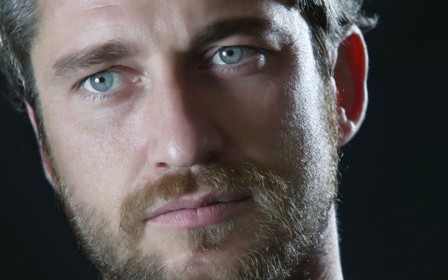 In part two of our exclusive interview with Gerard Butler, the star of 300, P.S; I love You and Olympus Has Fallen opens up about his career, his romantic life and his thoughts on his home country.

Butler didn’t first set out to be an actor — after graduating with a law degree from Glasgow University, he was taken on as a trainee by an Edinburgh law firm, but his party-loving lifestyle led to dismissal a week before full qualification as a lawyer.

So he headed south to London to pursue a career on the screen, eventually landing a string of minor roles in Tomorrow Never Dies and Mrs Brown.

“When I first moved to London, it took a good two or three years of slave labour, doubt, and pure what am I doing here attitude,” he recalled. “I was working waiter jobs in Soho, as a telemarketer, you name it. I did it while trying to pursue this impossible dream.

“But then I landed a job behind the scenes at the Mermaid Theatre in Blackfriars and that’s where a shift happened, where I suddenly found myself in an environment where I could potentially meet people who could help me.”

Introduced to director Steven Berkoff, who cast him in a stage adaptation of Coriolanus, this eventually led to a theatre reworking of Trainspotting, offering the young actor a platform.

“Those years in London, they gave me a foundation. As much as I love the international lifestyle my career has afforded me, and a base in LA at that, coming back to London – just like going back to Paisley – reminds me of what I went through to get where I am today.”

The future – Scotland’s and his own

As he is a proud Scot, one wonders where Butler stands on the Scottish Independence referendum, which will be held next year. Oddly, or maybe, practically, he’s somewhere in the middle.

“I’m not 100 per cent sold on the idea. I used to have intense feelings for an independent Scotland but now I’m more about coming together, rather than a separation. I think some separate taxation and more of a connection with local government is smart, and should be worked on, but I don’t think an independent Scotland is necessarily a good idea.”

Butler is currently in what appears to be his longest-standing relationship to date with Romanian model Madalina Ghenea, whom he met on the set of a commercial in Dubai. Butler gives the impression he may be finally ready to put down roots.

“Priorities change as you get older,” he said. “I guess part of me would love to have toddlers running around, to enter that new stage in my life. But sure, that’s pretty normal for anyone really.”

And career-wise, he seems to be embarking on a new direction too, with plans to start shooting on harrowing Holocaust drama Dynamo, which charts the Ukrainian uprising against the Nazis as well as Thunder Run, an Iraqi war epic co-starring Matthew McConaughey and Sam Worthington, in similar vein to The Hurt Locker.

And what of the rumours of an appearance in the sequel to 300? “I think that rumour is done. Unless they’ve used CGI (computer-generated imagery) and not told me about it, I don’t think I’m in it,” he joked. “They offered it to me and I really liked the script but I didn’t understand what I was there for; all I was doing was giving a political speech – it was only a minor sideline. It just felt better that I wasn’t a part of it.”

It’s fair to say Butler straddles the line between action and rom-com pretty successfully. In the past 12 months alone, he’s gone from Machine Gun Preacher to Playing for Keeps and now Olympus Has Fallen. Is this an intentional mix?

“I wish I was that calculating,” he chuckled. ”Honestly, I just take what I can get. I guess I like to mix it up… isn’t that what acting’s all about? Hopefully there’s no fear that I’ll ever be typecast.

“And of course, it’d be great to think a big award might be around the corner. I mean it would be lovely, wouldn’t it? So many say they aren’t bothered but it’s a lovely recognition for your work. I think every actor has a moment where they think, that’d be nice. But we’ll see down the line, who knows?

“My goals are just to keep working, be happy, be healthy. No-one can really ask for more than that, can they?”

Jetsetting around the world may be all well and fine for now, but in the future, Butler foresees a move back to his homeland.

“I think ultimately that’s what I’m working towards. LA and Dubai, and Australia – all these places are phenomenal and wonderful for the short-term, but I think I really want to move back to my roots and settle in Scotland — back to Paisley. Yeah, I could see that happening very easily. And whenever I return home it restores a bit of the bullishness that I carry around with me. That can become a bit too softened in LA, so I like to recharge in that way!”