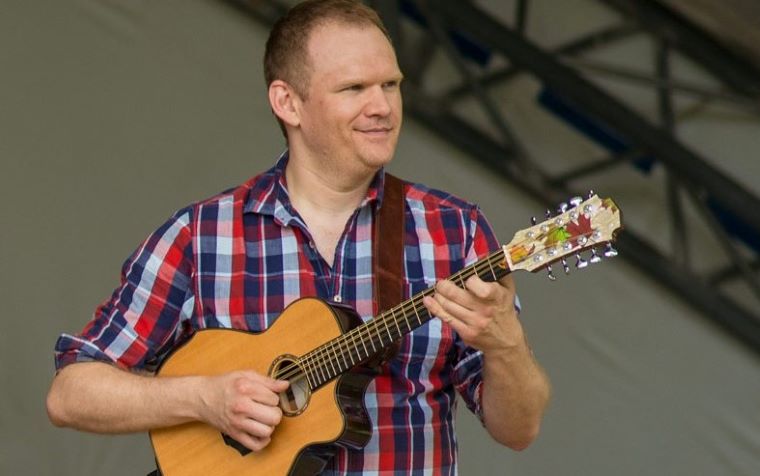 Graham Lindsey is a multi-instrumentalist and composer, writing inventive and varied tunes. His compositions don’t follow the traditional Irish, Scottish or other Celtic styles, and the subtle differences bring a unique feel and rhythm to each tune. Recently we spoke with him about his passion for music, and his latest release The Next Big Thing.

What first inspired you to get involved with music?
I’ve been playing music since I was about 6 years old and grew up in a musical family. I always enjoyed making music, and it was just something I did naturally. Of course, it required lessons and training.

Are they the same reasons that you continue to do it today?
Broadly speaking, yes! I continue to play music today because I still enjoy music, and I have even found ways during the Covid-19 pandemic to safely play with friends. More specifically, when I have been working full tilt taking out a stringed instrument or flute/whistle really helps put things in perspective, and I can relax a little. I play music first because I enjoy it, but if it is not done with friends, there’s something lacking in the experience.

What are the challenges of the vocation?
The traditional challenges of being a musician typically include earning a living, ever-decreasing wages being paid by venues, streaming revenues barely paying for a coffee and so-on. With the pandemic, there is no chance that any of the musicians I know in North America would have considered a traditional tour this summer. One musician I know had to drive many days (from Manitoba to British Columbia) and span three time zones, and she played several physically distanced concerts on her way, to get by over the winter.  It’s a very tough life for a lot of musician friends right now, especially being less in-demand. 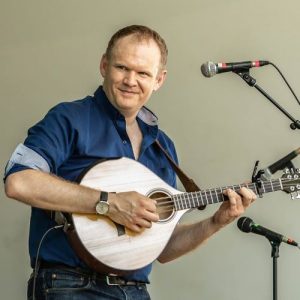 What are the rewards?
These days are typically not financial. Instead, recording “The Next Best Thing” involved a number of Zoom-based planning sessions, remote recording and all the sorts of technical work that I really enjoy. In one case, I was the audio engineer for a Grammy-nominated artist, Leonard Podolak (founder of The Duhks) in Winnipeg. I’m based in Ottawa, which meant I did some of the typical engineer work like mic placement (done via video conference), setting up the recording software (which I actually did using screen sharing software to Leonard’s computer), and cueing up the playback. The first track on the album is called Fractions, and that’s definitely the most technical recording work on the album.

What inspired The Next Best Thing?
The Next Best Thing only happened when it did because of the pandemic. I was supposed to tour Europe over the summer, and when it was clear that wasn’t going to happen, I decided it was more important to take the money I saved for that trip and put it in the hands of the musicians I would hire for the album. The immediate availability and relatively predictable schedules of all the players actually allowed me to secure much different people than would have been available before. For example, the members in the band Còig, The April Verch Band and The Small Glories (and all the others on the album too) are always on tour.  In this case, I was able to approach them and work together where before it would certainly not have happened in the short timespan of the album’s creation.

How did you go about choosing the songs and musicians for the recording?
The album is entirely comprised of my instrumental compositions and two songs that I co-wrote, so selecting the instrumental compositions I wanted to feature involved my playing them a whole lot with other sheet music in front of me: going from one tune into another, trying to build the right feel for the track. The approach to ask different artists for the various tracks had to be different this time. My first album, TradHead (2019), was primarily recorded by my band From Away, but it also included a variety of other artists on different tracks to give a significant amount of variety to the album. I decided to minimize the overlap in musicians because the two albums are very similar, and it gives them an interesting “Volume I, Volume II” feeling. I played with Simon Nyberg and Markus Räsänen in Sweden when I was on tour with Newfoundland-based fiddler Carole Bestvater in January, and the sound we had was something like I had never heard before. I knew that would be a core part of the album. Getting The Small Glories to be the core of the title track “The Next Best Thing” was huge for me, because they are rising stars in the Folk world… but also two really outstanding people and good friends. I wanted to work with great people who are also great musicians.

Do you have a favourite track?
My favourite track continues to change. I love Fractions because it is so different, and yet extremely catchy. I look at it as the “weird” piece on the album, but it has a really good rhythm to it. At the risk of copping out and picking two more, I can’t say enough how the title track (yes, “The Next Best Thing”) is catchy and should be the most popular track from the album, and the tune “Shack Wacky” is iconic to me. Fiddler Anita MacDonald (from Cape Breton) texted me in late March asking if I had been going a bit shack wacky. The answer was “absolutely!” 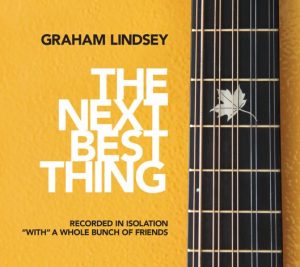 What has the response been like so far from those around you?
I am so fortunate that everyone who has responded said they are really enjoy the album. One friend in the U.S. said she had to stop what she was doing, when otherwise she would have been listening to it in the background, because she needed to know what was happening with the rhythm.  Everyone who has reached out to me after hearing the album is very positive about the overall feel of the album, and how well it all came together despite recording it in abiding by Covid-19 protocols in each location where the recording took place.

Is your creative process more ‘inspirational’ or ‘perspirational’?
I would say my creative process is more inspirational than perspirational. When writing tunes, I typically sit down and will have the bones of a tune in a few minutes. The occasional tune that needs some fine touches will often take days. I am still getting compliments for my tune “Ollie’s Tune” which took me a week of daily edits to get it to its final form. For me, as long as I have an instrument, I can create a melody relatively quickly. When it came to recording the album more perspiration was definitely involved: I enjoyed the ability to combine two or sometimes three parts I was playing (on the track Flying Paul, I play mandolin, octave mandolin and 12-string guitar), and to continue the creativity, I designed the artwork myself and thoroughly enjoyed the process.

What advice might you have for younger musicians?
I am working with a couple of younger musicians now, and it is a tough time to get into anything that involves being in the same room with people you don’t know. That means right now is a time to practice our craft – and all musicians who want to advance in their field should always be practicing. I would say they should record their playing early on because they will have the ability to listen critically to how they sound and identify what could be improved. I actually don’t like “perfect” music. If something is played too perfectly, I feel it is too close to robotic in sound, so I would say choose feeling over technical perfection.

What are your plans for the rest of 2020 and going into 2021?
I don’t think many, if any, musicians will be doing concerts unless they are physically distanced. That means we have to reinvent ourselves in one or more ways. I definitely won’t be touring different cities, so I am actually working on getting artists set up to do digital concerts via Facebook or Zoom. I am also on the board of the Canadian Folk Music Awards and am excited to be working to celebrate our nominees in new and different ways. I am also working with Home Routes, a Canadian organization that used to be focused on house concerts for different artists, and they are now offering online concerts. I hope the work I’m doing will give other artists the platform to make a little money (or a lot, if at all possible) so they can remain afloat. With any luck, 2021 will involve a return to festivals in Canada and Sweden, but I won’t jump the gun just because I’m missing playing live music.