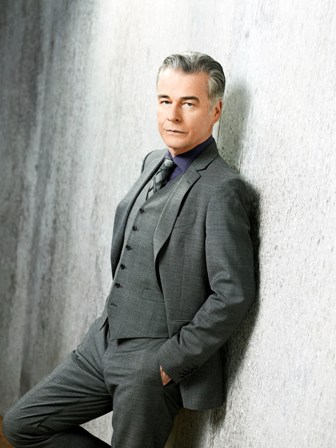 You see, Buchanan, who had played the notorious romantic adventurer from 1986-1989, was recast with actor Greg Beecroft, but when fans never warmed up to someone else in Duke’s shoes, the show killed off the character. But this being daytime, death rarely sticks.

“This go-around has been great…” Buchanan said. “I love what they are doing with him and the show, looking back at those from the ’80s who were important…”

Born in Hamilton, Scotland and raised among six siblings in East Kilbride, Buchanan’s father was a foreman and his mom a nurse.

“I have happy memories from my summers, the days were very long and we would spend them bicycling and swimming in the river,” he shared. “Winters were never my favourite because the days were very short and we went to school in the dark, but everyone was nice, and people didn’t lock their doors and generally felt safe.”

His first career choice was not acting, but the hospitality industry and he worked as a bellhop at 14 and studied hotel management in Scotland.

While on vacation in Spain, Buchanan was discovered by a photographer and was soon working as a fashion model. After 10 years of modelling, Buchanan made his way to acting, studying at New York’s Lee Strasberg Theatre Institute.

“I didn’t set out to make acting my career. It was something that I was drawn towards,” he said. “I was always in plays in school and when I became a model I graduated into commercials and it seemed like something I would like…”

Early on, he was seen at Manhattan’s The Actors Studio by ABC brass who wanted him to play opposite British-born Finola Hughes as Anna’s love interest in General Hospital.

“…It was a lot of hard work and very exciting and I was oblivious to how big it all was. To be part of a super-couple (with Hughes) was a lot of pressure, but we kept it light and had a lot of fun with it.”

Upon leaving GH, Buchanan was looking to do comedy. He found that opportunity, first as Ian McFyfer on It’s Garry Shandling’s Show and then as Dick Tremayne on Twin Peaks.

“I was doing a commercial for Calvin Klein’s Obsession and David Lynch was directing it and Lara Flynn Boyle (Twin Peaks’ Donna) was in it and a week later, he called me in to do Twin Peaks,” Buchanan said. “There’s this big resurgence of the show now and it’s a cult success all over, and it was an interesting time for me.”

In 1993, Buchanan was lured back to soaps and began a six-year run on The Bold and the Beautiful. That was followed by turns on All My Children, Port Charles and Days of Our Lives.

Recently, he and Hughes attended a charity event for ChildHelp, a group that rescues children from abuse, and he was amazed at the love and support the fans of General Hospital still have for the actors and the characters of Duke and Anna.

That’s why he’s excited to be back on the General Hospital canvass. He’s also keeping busy elsewhere on stage. He has been a member of the NYC political cabaret troupe, The Citizens Band, for the past 10 years, alongside notable performers like New Girl’s Zooey Deschanel, Zoe Kravitz, Karen Elson and Nina Persson from the Cardigans.

“We often have four shows a year and I go to New York when we get one ready,” he said. “I’m also doing The Lion in Winter this spring with Mariette Hartley at The Colony Theatre in Burbank.”

Four of Buchanan’s brothers and sisters still live in Scotland and the actor makes sure to return at least once a year. Looking back, he is happy with the way his career has turned out.

“I’m very grateful for the fans and how supportive everyone has been. It’s been quite the adventure.”