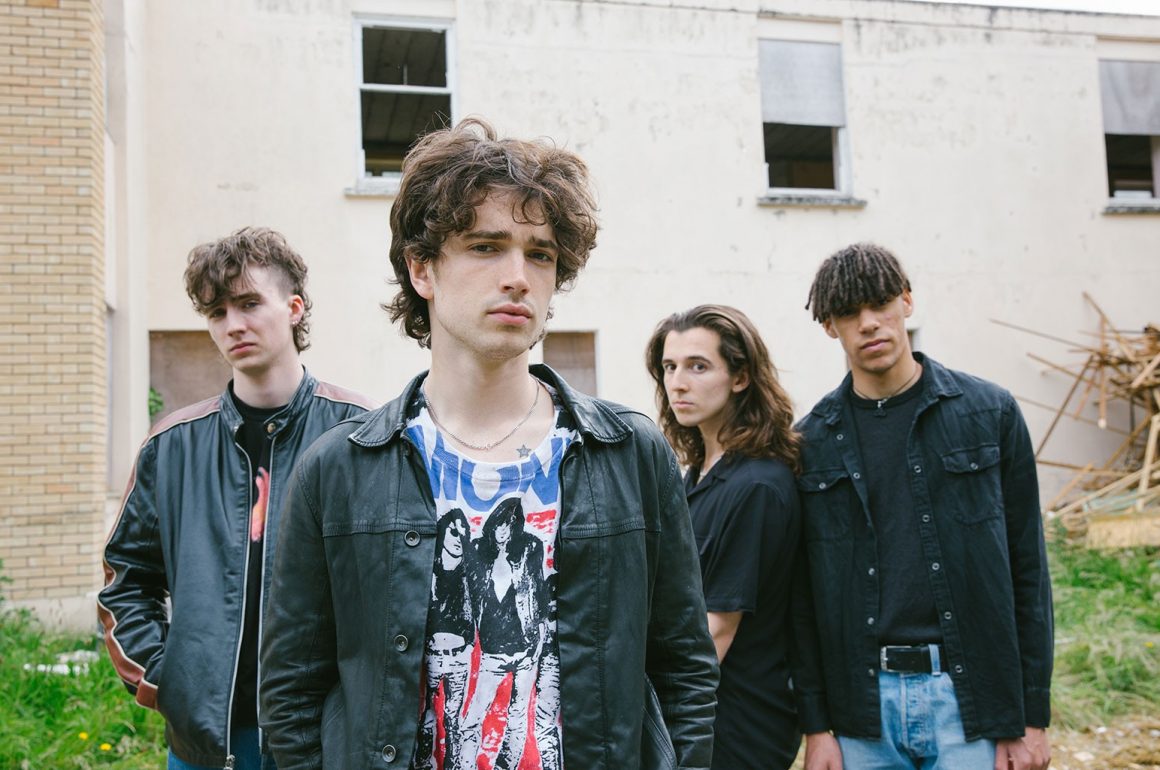 Sitting on a couch in Dublin, Ireland, Inhaler frontman Elijah Hewson lets out a long, heavy sigh. Flanked on either side by his three bandmates, the 20-year-old pauses for a moment to consider an alternate universe; one in which Covid-19 hadn’t wreaked havoc on the world and forced everyone to isolate, lock down and ride out the mania. At the time, rock group had just wrapped up a run of shows through Japan and were thrilled thinking about what fresh experiences 2020 might bring.

“We had a whole America gig tour booked,” he notes, including two headlining concerts at one of the most venerated venues in Los Angeles, the Troubadour. “We were going to record it last March… and we were going to release the album last August.”

Obviously, events beyond the band’s control prevented them from following through with their initial designs. However, the unexpected space it gave them to pause, reflect, and reconsider some of their initial ideas may have been to their larger benefit. “I think if we had gone straight from being on tour into recording the album, I feel like we would have been a bit burnt out,” Hewson admits now. “It would have been more of a compilation of singles rather than an album.”

It Won’t Always Be Like This, which dropped on Friday July 9, is the band’s first full-length release and it’s far from a disjointed compilation of singles – even if some of the songs have been released previously. The album is an instantly gratifying and cohesive 11-track experience brimming with big choruses, insanely catchy riffs, and enough shared sonic DNA with bands like The Strokes, Joy Division, Interpol, and MGMT, to delight post-punk and indie fans for years to come. It’s also the culmination of a near-decade of shared artistic growth dating back to when the band was just entering their teens, and the kind of hard-earned experience you can only get from the nightly grind of playing in front of people. 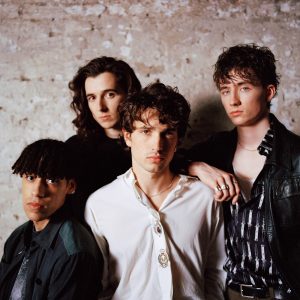 Inhaler’s beginnings stretch back a surprisingly long time, all the way to 2012 when Hewson, bassist Robert Keating, and drummer Ryan McMahon met in school in Dublin. Guitarist Josh Jenkinson was inducted into the fold about three years later. Eventually, they were introduced to former Pulp member and one-time Mescalero Antony Genn who hit them with some blunt reality. “He’s like a father figure to us. He was the first one to tell us that he didn’t think we were very good. Which was tough to hear, you know?” Jenkinson says. First and foremost, Genn echoed the advice Rolling Stones manager Andrew Loog Oldham once delivered to Mick Jagger and Keith Richards when they were at the beginning of their career, scraping by on blues covers: “People weren’t really giving it to us straight, and then this guy was like, ‘Dude, you guys have to be able to play your own songs.’ And we were like, ‘What? That’s genius!’

And so, they began to write. Their first single, the shoegaze-y “I Want You,” dropped in 2017, followed by synth-drenched “Ice Cream Sundae” a couple of years later. The latter track, a jangly pop-rock earworm, proved to be something of a breakthrough, with a video that currently has almost a million and a half views on YouTube.

t’s clear from talking to the members of Inhaler that song writing, along with the organic act of crafting chord progressions and stitching together melodies via their own instruments, is something the band takes very seriously. “There’s a song on the album called ‘Strange Time to Be Alive’, but our drummer was like, ‘Dude, it’s a strange time to be a rock band,’” Hewson says. “We were looking at the charts the other day, and I think we were all just a bit sad about it, because there’s a lot of music that… I’m sure there’s a lot of passion put into it, but I feel like there’s a lot of music that doesn’t have maybe that much feeling in it, and drive and fire. We love all these old bands, like Joy Division and Stone Roses and all that, and we just miss great songs, man, and we just want to write some of them.”

Which brings them back to the unforeseen benefit of being locked up in the house for months at a time with little else to do but ponder their craft. Inhaler went even deeper than ever before. “I think just a sense of jeopardy was definitely a big turning moment for the lyrics,” Hewson says. “Before lockdown…We had been a little bit less mature, I guess. We’d come straight out of school to being in a band and being on tour. All our mates were getting on with their lives, but every time we came home to Dublin, we would just be the same lads, and everyone else would feel a little bit older; maybe in their second year of college, or whatever. So, our lyrics were more inspired by immediate things, like the party you were at last night, or the girl you had a crush on, all that kind of stuff.”

The new reality instantly brought new perspective. “We just wanted to talk about more broad things. There is such chaos going on in the world that I think if we were ever going to write about stuff like that, we were going to write about it now; that juxtaposition between being an innocent teenager to being a paranoid, responsible adult. And it’s like the album meets in that little middle area of that.”

Take a song like the moody dance anthem “A Night on the Floor,” for instance, in which Hewson sings “God bless the madness of the 50 states,” and alludes to teachers hiding under desks. “That’s one that we’ve been crafting live for a long time, and the lyrics are actually inspired by a lot of the goings-on in America over the time of the album,” Hewson says. “We love America. I think all Irish people just have an affinity to it…It almost feels like America is having a bad hangover right now. That’s what that song is inspired by. And it’s just a bit of chaos.” 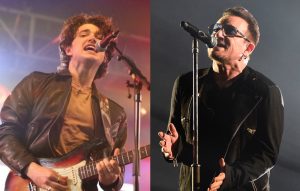 Hewson is hardly the first Irishman in his family to ruminate on the American experience in song. If his voice has an uncanny familiarity about it that you can’t quite place, that’s because his father happens to be Bono, lead singer for U2, one of the biggest bands in music history, who achieved global alt-rock superstardom on the backs of U.S.-inspired records like The Joshua Tree in the late ‘80s. At the outset, the elder Hewson, along with the rest of Inhaler’s parents, weren’t exactly stoked about the prospects of their children pursuing a career in rock and roll. Practically no one on Earth is more familiar with how daunting and fraught the prospect can be.

“They definitely didn’t like it when we said we were going to be in a band,” Hewson says. “I think all our parents were a little worried. We had to prove that we could do it. And I think that they all saw that we had a lot of passion. And I don’t think any of us were going to really end up doing anything else, to be honest.”

Once he made the realization that Inhaler was an all or nothing proposition, Hewson’s Dad eventually came around. That doesn’t mean however, he’s been particularly hands-on with the enterprise. “I think he’s definitely given us some great advice about being in a band, but really, we both know that it’s important that we keep our distance,” Hewson says. “You can’t learn your lessons without having experience and without having made some mistakes. I think it is definitely important that we try and stick on our own path. That being said, he has been really supportive, and all our parents have been really supportive.”

With the lockdown foiling their initial recording plans, the four lads spent a large portion of their Spring hopping on Zoom calls and sharing Logic recording screens online, while writing five additional new songs for their debut record. They also refined earlier songs, like the lead single “Cheer Up Baby,” which had been bouncing around since the first time they ever performed it on St. Patrick’s Day in 2017. “We play it at every gig, our fans just to seem to gravitate towards it — you can tell it’s the loudest sing-along song in the room,” Hewson says. “There was an Instagram page called ‘Please Release ‘”Cheer Up Baby.”‘ It almost felt like it was our duty to the fans to put that out.”

While their fans were certainly amped about hearing “Cheer Up Baby,” the band couldn’t help but at least consider the irony of releasing a song with such an upbeat title at a time of extreme social consternation. “It was funny, because at the time it was like, ‘Oh, cheer up, baby,’ in this kind of time? Is it a bit on the nose? Are people not going to take it well? And then we were just like, “It’s a great song. Let’s just put it out.” 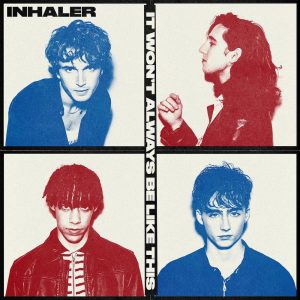 After working separately for so many months, Inhaler finally got the all-clear to enter Narcissus Studios in London around September and started laying down tracks. That’s when their earlier, independent, and isolated dynamic flipped entirely. “We were sharing beds for like two months in [Genn’s] house,” Hewson says. “We would just walk to the studio every day and come back. We were really in each other’s space the whole time. We weren’t able to go out and have drinks, nothing like that, because it was all in lockdown. And so, yeah, it was just a lot of work. A lot of blood, sweat, and tears.”

Two continuous months is a long time to spend in anyone’s company, even among your closest of close friends, and the confined nature of the experience was at times…daunting. “The only experiences we had with each other for those whole two months was work,” Jenkinson says. “It definitely put a strain on the immediate relationship.” However, the totally immersive approach and its test of the band’s resolve wasn’t without its benefits. “I think, for the long term, it’s made us grow stronger — because it’s shown us that we can actually deal with each other in these close quarters for such a long time, and still come out the other side with a great result,” the guitarist adds.

With It Won’t Always Be Like This finally out in the world, Inhaler is more than ready to make up for all the time they lost in lockdown. They have been tested in ways they could never have imagined and come out on the other side clean. More than anything at this point, they are simply champing at the bit to do what they do best — play these songs live, hopefully in a town near you. “We’ll do weddings, birthdays, bat mitzvahs,” Hewson says. “Anything.”