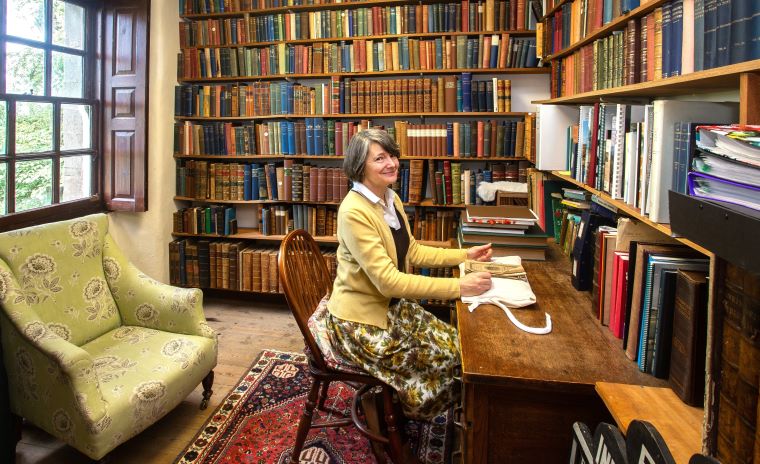 1680 marked the start of a decade known in Scotland as The Killing Time. In that same year David Drummond, 3rd Lord Madertie – whose ancestral home was at Innerpeffray in the beautiful countryside of Perthshire, Scotland – made his entire library of some four hundred volumes available for the public to borrow without charge. That simple action saw the creation of the country’s first free public lending library.

Drummond fought on the side of the Royalists through some of the bloodiest civil wars the country had experienced and was no stranger to the use of weaponry. The desire to make his books available, spread knowledge, and demonstrate ‘the power of the pen’ during such turbulent times provides a valuable insight into his character, and speaks to the ages-old adage that ‘the pen is mightier than the sword’ (Edward Bulward-Lytton).

Today we take the existence of libraries for granted. Despite the advent of the internet and e-readers, there is still something wondrous and tangible about holding the words of another voice printed on paper. There is the feel of the cover (with perhaps a tantalizing image), possibly a leather-bound volume with embossed, gold lettering, the thickness of the paper, the style and type of the lettering used by the printer, and, in the case of older works, there is both the metaphoric and literal smell of history. Those reasons, coupled with either a search for knowledge or entertainment, have ensured that libraries can still be found in many cities and towns across the world. Even small villages often have their own library or a visiting library on wheels. When I located Drummond’s legacy to the people, however, Innerpeffray Library was neither in a city, nor a town, nor a village; it was atop a gentle hill overlooking an ancient ford on the River Earn in a wooded part of an otherwise agricultural landscape once dominated by a Roman fort and road. The nearest town, Crieff, lies four miles away. 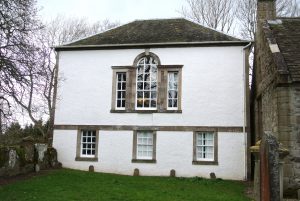 Following the Battle of Bannockburn between the Scots and the English in 1314, King Robert the Bruce granted lands in Perthshire to Sir Malcolm de Drummond as reward for his support at the battle. One branch of the Drummond family established its seat at Innerpeffray Castle by the hamlet of Innerpeffray in Strathearn. By the early 16th century, the family erected Innerpeffray Chapel nearby as a private, chantry chapel, subsequently establishing it as a collegiate chapel by the mid-16th century – a popular move with the wealthy at that time. Its use as a place of Catholic worship was, however, short-lived – being ended by the Protestant Reformation of 1560. On account of its use, principally as the Drummond family mausoleum, it escaped the worst, destructive ravages of the upheaval in the church. It was from the loft of this chapel, a century later, that David Drummond made his impressive collection of books available to the public to borrow freely.

Originally comprised of about 45o volumes on such diverse subjects as religion, witchcraft, gardening, and history, the library continued to acquire books, eventually expanding its collection to include treatise on medicine, travel, philosophy, and the natural world.

Although many of the works were in English or Latin, other languages were also represented. Drummond left instructions in his will that following his death he wished the library to continue to exist for future generations. He bequeathed significant funds for the purpose and following his passing in 1692, his successors, in compliance with his wishes, established a Trust Fund under the somewhat macabre title of the Innerpeffray Mortification. The Trust exists to this day.

In 1739, ownership of the estate and its library fell to Robert Hay Drummond who, in 1764, became Archbishop of York. Under his guardianship the library continued to grow. This was the age of the Scottish Enlightenment, and Innerpeffray Library – and its collection – played no small part in furthering the spread of knowledge. The original arrangement of housing the books in the loft of the old chapel was neither conducive to encouraging borrowing by the more learned gentleman nor was it the best arrangement for storing important volumes that had been acquired over the course of a hundred years. Hay Drummond commissioned a purpose-designed library that opened its doors in 1762 and remains the Georgian-style building sitting alongside the old chapel that can still be seen today. At the same time, he expanded the collection significantly. The upper floor of the library was designed as a bright, reading room with an open fireplace that once warmed the patrons as they perused oversized, leather-bound volumes from the comfort of large, padded chairs or seated at wooden tables. Now, glass cabinets display some of the rarer books in the room. There is also a small anteroom housing further books in a more intimate setting with a window directly overlooking the river through the trees.

The Innerpeffray Library collection boasts many valuable and irreplaceable items – including a 1633 pocket bible in French carried into battle by the 1st Marquis of Montrose (and bearing his signature), Henry VIII’s Great Bible (1539), Poisson by Pierre Belon (1555), and John Knox’s Historie of the Reformation (1644). The collection received a major boost in 2013 when a New York bibliophile with Scottish ancestry – who had visited the library twenty years previous – donated a substantial quantity of rare Scottish volumes. Mrs Janet Burns Saint Germain’s gift included an incunabula edition of the works of John Duns Scotus (1476), numerous first editions such as Robert Louis Stevenson’s Treasure Island (1882) and Samuel Johnson’s Journey to the Western Isles (1775), as well as works by Robert Burns and Sir Walter Scott and first editions of some of the great thinkers from the Scottish Enlightenment period. 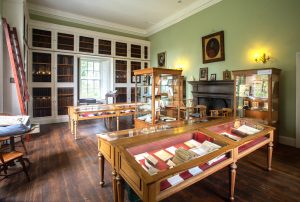 In addition to the library there is evidence that a school formed part of the original arrangement of chapel and library provision and was part of the Drummonds’ legacy for the education of future generations.

The most recent Innerpeffray School classroom sits a short walk from the chapel and was constructed in 1847. It closed to pupils in 1947 and today it is used for events – often related to books and reading – and private functions.

The library is managed by Lara Haggerty the current Keeper of Books. It is a role she has undertaken since 2009. Originally from Wales, but having lived in Scotland for over 35 years, Haggerty studied English Literature and Theatre at Glasgow University and worked previously with heritage and museum organizations, including the National Museum of Scotland. With great care she removed the Borrowers’ Register from inside a glass case and laid it open carefully on a cushion. “This,” she exclaimed enthusiastically, “is one of the oldest, continuous Borrowers’ registers in Europe. It records every person who has borrowed a book from the Innerpeffray Library between 1747 and 1968.” As it lay open at the pages that recorded loans between October, 1783 and June, 1784, I observed that the most borrowed books related to the Christian faith but also included such others as a History of Charles V and Clarendon’s History of the Rebellion – a 16th century work looking back at the civil wars that had wreaked such havoc across the country in the preceding century. The handwritten notes of the loans offered a fascinating insight into what occupied the minds of those using the library over two hundred years ago.

As a consequence of falling interest in borrowing rare, historic books – and also considering the value and importance of the collection – the library stopped lending books in 1968. It does, however, continue to operate as a reference library and has established itself as an important visitor destination for anyone who loves history, books, or buildings with fascinating stories. ~ Story by Tom Langlands