It was days like this one that justified a full Irish breakfast. I had hiked up and down a mountain steeped in thousands of years of pagan and early Christian mythology, and now I was worn out. A large part of me was arguing for a mid-day nap, but after some strong sweet tea I had no choice but to continue to explore the wonders of the Dingle Peninsula. I wanted to find archeological sites beyond the half-dozen that were listed in glossy pamphlets, or pictured on grease-stained fish ‘n’ chip shop placemats.

While these visitor-friendly, entrance-fee sites are worth multiple visits, I knew I could cross them off eventually. For the afternoon, I wanted to stumble – gracefully or otherwise – on the lesser-known sites. The Dingle Peninsula promised to be an archeological Easter egg hunt, with over two thousand sites found to date, but this meant finding these places with only basic directions. It also meant trekking through mud and muck and possibly fighting off the occasional sheep. And, I would probably get lost along the way.

I looked out towards the harbour where various fishing boats were bobbing up and down and fishing nets were hung to dry or be repaired. 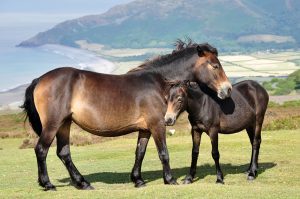 I randomly flipped open my guidebook. There was passing mention of some early Christian settlement somewhere in Ventry. By the sounds of it, all I had to do was park by the quarry and head up over the hill. The guidebook didn’t give specific directions to the quarry or how far up the hill I needed to go, but I took off to see if I could find it.

Ventry was advertised as having one of the most attractive and safest beaches on the west coast of Ireland. I didn’t find the scattered holiday caravans wrapped in tarpaulins for the winter very attractive, and I couldn’t comment as to whether the beach was safer than any of the other beaches on the west coast when I parked at the shoreline, but it did seem a nice place to holiday in warmer summer months. Rather than getting out of the car, I drove back up to the main road and found the post office that doubles as the local corner store.

At this point, I could have asked for directions, but that would have been too easy and would have eliminated the element of adventure, so I continued on past the post office and up the road. I found what I thought might be a quarry. There was no signage, and to me it just looked like a big hole, but I thought I would have a look around. There was no obvious place to pull over, so I opted to park the car at an awkward angle in the mud with the back half of it hanging out into the road. It looked like the quarry was on private property, but I jumped the fence and headed up the hill anyway.

I was soon dodging gorse bush and slogging through the soft mud and muck as I slowly ascended the steep embankment. Up and up I went, keeping an eye out for any kind of early Christian settlement, but I couldn’t see anything remotely matching that description. Too concerned with my footing, and hoping not to slip and slide all the way back to the car on a muddy rear-end, it was difficult to see where I was heading. I continued on and hoped for the best. 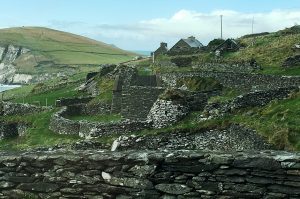 I got the strange feeling someone was watching me. This certainly didn’t help my fragile state of mind, as I was weighed down by the soft mud and muck and wondering what possessed me to hike up random hills in western Ireland. I imagined a local farmer’s wife as she stood at her kitchen window. I’m sure I made for great entertainment – the ‘eejit’ tourist making his way to nowhere. She might have called her husband from the sitting room to watch me as I swore under my breath. I imagined them both doubling over with laughter when I stopped in my tracks as half a dozen large animals came running towards me.

I was expecting sheep. I had seen enough sheep during my walks in Ireland to know that sheep were usually docile creatures. We had an understanding: they kept to their business and I kept to mine. But these weren’t sheep. I couldn’t really make out what these were in my adrenaline-fuelled panic, but they didn’t move like sheep. They were a lot larger and a lot faster. As they sped up and came thundering towards me, I realized they were actually wild ponies. Maybe they weren’t wild in the sense of undomesticated, but certainly they were wild in the sense of covered in mud.

I didn’t know whether to run or continue to stand there, so I chose the latter and hoped for the best. “Please don’t trample me,” I whispered. “It’ll be ages before anyone finds my broken body.

They continued running towards me and I continued to stand there dumbly, doing nothing. I was bracing for impact when, luckily for me, the ponies slowed down when they discovered I wasn’t their owner and hadn’t come to feed them. They stood there just as confused as I was. Then they all snorted and walked away. Relieved to find myself un-trampled, I made my way further up the hill.

I hiked and hiked and couldn’t find a damned thing. I should have come across something – some wedge tomb or fairy fort or Ogham stone – but all I found was gorse bush and soft mud and muck, followed by more of the same. I looked down towards the road and wondered whether I was cut out for random wanderings. With a heavy sigh, I decided to end my fruitless quest. I was tired and cold.

I turned around to take in the view. It was breathtaking.

The setting sun, in purest amber, lit up the farmers’ fields in an array of golden greens. The late afternoon light bounced off the wet rocks, and even the muddy ponies had a mythical glow. It was a gentle pastoral scene and, as I felt the wind blow in from the ocean, I felt an overwhelming sense of peace. 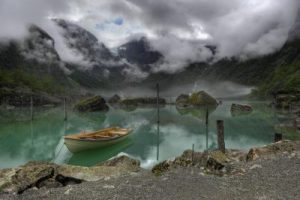 I also spied a circular stone enclosure in the middle of a farmer’s field down below.

It could have been a Stone Age fort or an early Christian settlement – it didn’t really matter. Whatever it was, it was something more than gorse bush and mud and muck and wild ponies. And it warranted a quick peek – if carefully making my way back to the car, driving further down the narrow country road, finding some sort of parking, jumping a fence, and running across a field where all sorts of wild animals may be waiting could be considered a ‘quick peek’. But something pulled me towards it. I was still thirsty for adventure. And this looked relatively easy to find. History, I thought as I tenderly made my way back down, is about stumbling. Stumbling is about discovery, and it is discovery that makes history truly come alive.