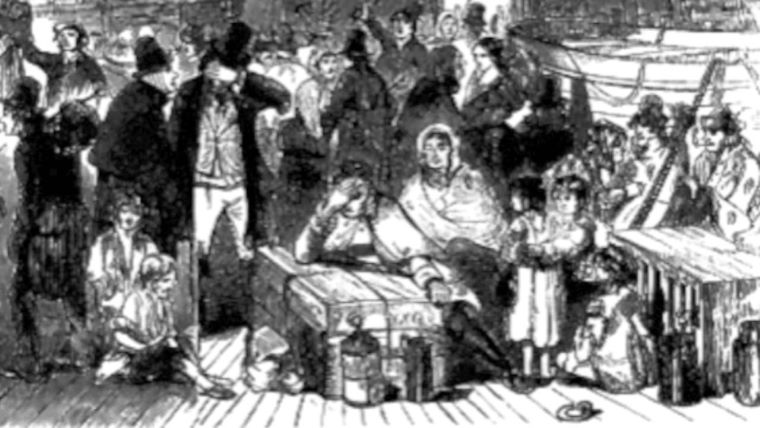 Irish migrations to Newfoundland and Labrador began in the late-17th century and reached their peak during the first two decades of the 19th century, when up to 35,000 Irish arrived on the island. The majority of migrants initially travelled to the colony on a seasonal or temporary basis to participate in the transatlantic cod fishery. However, as the industry shifted from a seasonal to a resident operation during the late-18th and early-19th centuries, most Irish migrants settled permanently in Newfoundland and Labrador.

The bulk of all immigrants came from ports in southeast Ireland, a region that established regular trade links with Newfoundland and Labrador in the late 1600s. Migrants left their homes for a variety of reasons – overpopulation prompted some residents to move elsewhere in search of land and employment, while others wished to escape financial difficulties brought on by poor harvests or job losses due to increased mechanization, the failure of local industries, and other factors. By the time the major waves of migration to Newfoundland and Labrador had tapered off through the early 1840s, Irish settlers accounted for approximately half of the colony’s population. 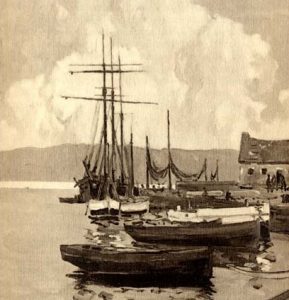 Until the late-18th century, Irish migrations to Newfoundland and Labrador were predominately seasonal or temporary in nature and occurred on a smaller scale than in later years. Most early migrants were young men seeking employment as planters’ servants in the transatlantic summer cod fishery. They typically departed home ports in the spring and worked in the fishery for either a single season or for two summers and one winter before returning to Ireland in the fall. Some remained overseas for longer periods of time and a small minority chose to settle on the island permanently. These, however, were vastly outnumbered by seasonal and temporary migrants until the 1780s.

Ireland’s export trade to St. John’s and other Newfoundland ports greatly influenced migration patterns. Although Ireland was not directly involved in the fish trade during the 17th century, Irish merchants helped to supply the English migratory fishery by sending salt pork and beef, butter, cheese, and other provisions overseas each year.

English farmers also produced these foodstuffs but sold most of their goods to England’s large and expanding domestic market instead of shipping them overseas. As a result, English vessels en route to Newfoundland and Labrador regularly stopped at Irish ports by the mid-1670s to collect provisions for the hundreds of fishers travelling overseas. Most visited Waterford and other ports in southeast Ireland, which were located along shipping lanes to Newfoundland.

As the English migratory fishery expanded in the coming decades, it required greater numbers of workers. By the early 18th century, ship captains loading provisions at Irish ports also began to recruit labourers to work overseas. Most were young, poor, unmarried men willing to stay for at least one season in Newfoundland to work as servants for planters or merchants. Because English vessels arrived at ports in southeast Ireland, the majority of labourers also came from this region – primarily from the counties of Waterford, Kilkenny, Tipperary, Wexford, and Cork.

Although most Irish migrants had no previous experience as fishers (most came from agricultural backgrounds), they appealed to planters as a source of cheap and readily available labour. Further, a shortage of English workers during the early decades of the 18th century made it necessary for planters to recruit servants from other areas.

Between 1702 and 1713, England was at war with France and military service prevented many young Englishmen from working in the migratory fishery. By the time hostilities ended, the Newfoundland and Labrador fishery had entered a downturn that did not end until 1728. News of the depression spread through the English West Country but did not reach Ireland. As a result, shipmasters and merchants’ agents could recruit Irish labourers with much greater ease than they could English workers.

By the time prosperity returned to the fishery in 1728, Irish workers had acquired considerable experience in the industry and were an increasingly important part of it. Some earned enough money to become planters and they in turn recruited additional servants from ports in southeast Ireland each year. The spring of 1732 brought 738 Irish workers to Newfoundland and Labrador and 238 bye-boat keepers, most of whom worked on the Avalon Peninsula. The number of Irish migrants steadily increased throughout the century and reached about 5,000 annually by the 1780s. By then, increasing numbers of migrants chose to settle permanently on the island and participate in a growing resident fishery. 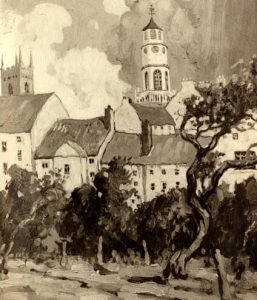 Irish migrations to Newfoundland and Labrador peaked in the first three decades of the 19th century, when between 30,000 and 35,000 immigrants arrived on the island. As in the previous century, most came from counties in southeast Ireland that lay along established trade routes linking the British Isles with Newfoundland and Labrador. According to historian John Mannion (1973), approximately 90 per cent of all Irish immigrants came from within a 40-mile radius of Waterford city, a major port for vessels crossing the Atlantic.

A wide range of factors prompted immigrants to leave their homes and settle in Newfoundland and Labrador during the early 19th century. Foremost among these were land, economic, and population pressures that made it difficult for workers to earn a comfortable living. The collapse of the textile industry in the southeast and a series of poor farming seasons between 1770 and 1830 resulted in much economic hardship for members of the working class. At the same time, Ireland’s population increased steadily, placing even greater pressures on Ireland’s limited jobs and resources.

Many residents hoped to find employment and land by emigrating overseas. As in earlier decades, most migrants were young, unmarried, unskilled men who owned little or no property and belonged to the lower and middle classes. Many came from agricultural backgrounds. Some had rented farmland in Ireland, but left after their leases expired; others were farm labourers with little prospect for advancement, or the younger sons of farmers who would not inherit land; still more worked plots of land that were too small to be profitable. A significant minority of migrants were also artisans or traders hoping to take advantages of job opportunities overseas.

Unlike Ireland, Newfoundland and Labrador experienced much economic prosperity during the early 1800s. The Napoleonic Wars (1803-1815) gave the colony a virtual monopoly of the salt cod trade, while the emergence of a shipbuilding industry, seal hunt, and winter trapping season helped to diversity its economy and make year-round habitation possible. In addition, British vessels could not enter American ports during the Anglo-American War (1812-1814), making Newfoundland and Labrador a convenient alternative to migrants wishing to leave the Old World for the New.

Wages within the fishery increased rapidly and jobs were plentiful, even for workers with no previous fishing experience. Newfoundland and Labrador’s expanding economy allowed it to support a growing resident population and thousands of Irish migrants arrived annually – in the five-year period between 1811 and 1816 alone, approximately 16,000 arrived on the island. Newfoundland and Labrador’s Irish population numbered 38,000 by 1836, which was almost five times greater than it was in 1800. 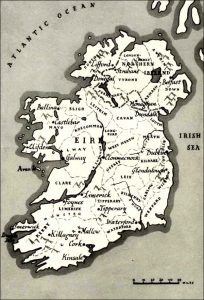 The number of Irish emigrating to Newfoundland and Labrador decreased rapidly due to the economic depression in the fishery that followed the end of war in 1815, although many Irish emigrated in greater numbers to other parts of North America. This was due in part to a shift in transatlantic

shipping lanes, which played such a major role in bringing immigrants to St. John’s and other island ports in previous years. As timber exports grew in value, Saint John, Quebec City, and other North American towns displaced St. John’s as popular ports of call for British merchant vessels. At the same time, Newfoundland and Labrador experienced an economic downturn following the Napoleonic Wars which prompted many potential immigrants to move elsewhere in North America.

Nonetheless, the Irish were a firmly established part of Newfoundland and Labrador society by the 1840s and accounted for roughly 50 per cent of its population. Today, many of the province’s residents have roots reaching back to the Irish immigrations of the 18th and 19th centuries.