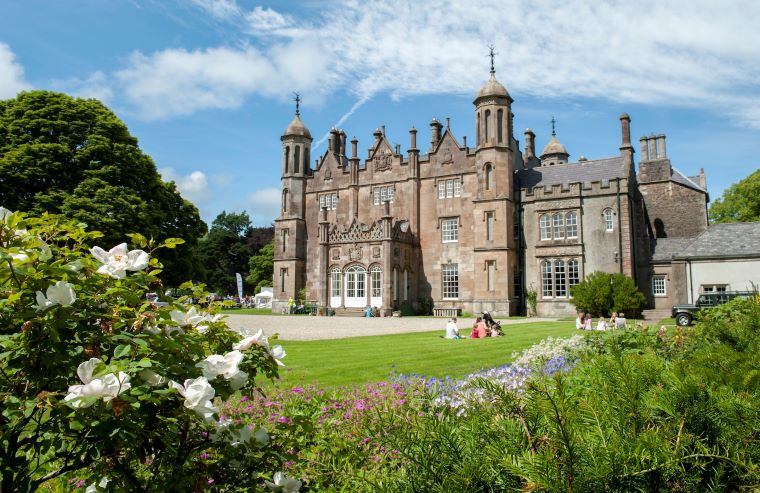 Frequented by showbiz royalty and actual royalty alike, Irish castles have long been famous for their ancient history and heritage, their beauty and romance, and with many also offering the ultimate in five-star luxury. As we all stay confined to home, imagine yourself as the lord or lady at one of these six unmissable strongholds around the country.

Dunluce Castle, County Antrim
The sprawling ruins of the medieval castle sitting at a cliff edge are all that is left of the fortress that was once the seat of the earls of Antrim. Dunluce Castle was home to rebellion and intrigue over centuries and is said to have inspired CS Lewis to create Cair Paravel, capital of Narnia. Here you might have to share the space with banshees (fairy ghosts) that are said to haunt the ruins.

Glenarm Castle, County Antrim
Since 1636 Glenarm Castle has been an important center along the spectacular Causeway Coastal Route in Northern Ireland. Here you could relax in the sumptuously decorated lounge while viewing portraits that date from the early 17th century. Imagine strolling through the walled garden and then ending the day with a restful sleep in a four-poster bed dating from 1754.

Tullynally Castle, County Westmeath
Overlooking the lake where the legendary Children of Lir were said to swim when they were turned into swans, Tullynally is a beautiful gothic-style castle. With over 120 rooms including the magnificent Great Hall, you would have plenty of space to roam. Outdoors the grounds include a grotto, a walled flower garden, two ornamental lakes and a llama paddock.

Birr Castle, County Offaly
Indoors and outdoors you’d be surrounded by splendour at Birr Castle. The opulent interior rooms include a Victorian dining room and octagonal Gothic saloon. The gardens are some of the most stunning in Ireland with exotic flowers, waterfalls and lakes and in the grounds sits the fascinating Leviathan telescope, once the largest in existence.

Blackrock Castle, County Cork
Originally built to protect Cork harbour, imposing Blackrock Castle with its towers and turrets is today home to the astronomical research center of the Cork Institute of Technology. The castle offers splendid views over the water and you could amuse yourself by spending time at the award-winning interactive astronomy exhibition, Cosmos at the Castle.

Ballynahinch Castle, County Galway
This fairytale castle set against the gorgeous backdrop of Connemara’s Twelve Bens mountain range has been home to some of the most infamous figures of Irish history, among them the pirate queen and chieftain, Grace O’Malley, and the ‘Ferocious O’Flaherty Clan’. The extensive grounds provide an ideal walking area and the evening could be spent curled up in front of an open fire.