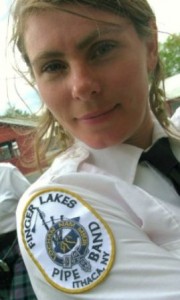 What is your own ethnic heritage/background?
Well, German mostly with a hint of Scottish, Irish, Lebanese and American Indian.

How, when and why did you get involved with the festival?
Well, I’m the founder of the festival and the short story is this…in 2005 I was living in Germany and playing in a bagpipe band there and on a night train from Munich to Berlin the idea to start a Scottish Games seemed to unfold so completely and effortlessly. I called my parents in NY to talk to them about it as they are both deeply rooted in the Scottish Games culture and standing there between the train cars the initial plans were hatched! The original location was to be the grounds where Oktoberfest is held, but by the time I launched the festival in 2008 I was living back in the states. I should say that I have been working in events, concerts and festivals since my early 20’s and starting my own festival was something that I always wanted to do. I’m so glad that it was a Scottish Games in Ithaca!

What is the festival’s core mandate?
Our core mandate is to connect our local Celtic Social network by giving them a venue to showcase their passions. We strongly encourage community and family involvement, combining nature, music, art, dance and historical demonstrations to increasing awareness, understanding and appreciation of Celtic history as well as to be an educational resource.

Wow has it grown over the years?
As a young festival each year it seems we grow in leaps and bounds. We have moved locations from the hills to a beautiful park right on the tip of Cayuga Lake. We’ve gone from one day to two days and even changed dates from July to June in 2011. Our athletic competition started out as an amateur event and has grown so much that we will have two fields over two days this year. We started out our band competition with just Grades 4 & 5 and last year we hosted a Grade 1 band competition and professional solos. Our demonstrators have also developed their displays each year and strengthened in numbers. But most exciting for us is watching the kids return year after year – this year we are adding highland athletics, interactive music and dance classes and a toddler area to our already exciting kids area.

Who attends the gathering?
With so many activities throughout the weekend, we have people who attend for all different reasons. What connects them all is their passion for Celtic culture and the love of a good outdoor event.

What can they expect to experience this year?
As with most Scottish Games, we’ll have massed bands, band and solo competitions (professional – grade 5), highland and Irish dance, clans and a host of Celtic themed food and craft vendors. We’ll also have two fields for athletics with our refreshment and entertainment tents between them. The Scottish tribal drum band Albannach will headline our entertainment tent and we will draw from the abundance of local talent to fill the rest of our schedule with bands like Traonach, The Grady Girls and Doolin’ O’Dey. On the traditional front, we will have sheep shearing, kilt making, spinning and weaving demonstrations and a scene or two from the Ithaca Shakespeare company. We will also premier an exciting historical textile presentation entitled ‘WAUKING THE TWEED” where weavers will be reenacting the waulking (fulling) of a 10 yard length of hand woven herringbone tweed accompanied by the singing of traditional work songs sung in Scottish Gaelic. Audience participation is most welcome and instruction by our very own Cornell Professor of Gaelic languages will be provided. Our kids activities area is always bustling with kids as we have made their education (entertainment) a top priority. We have musical sing-a-longs, dance, games, crafts and our ever popular clan scavenger hunt. We’ll also be adding youth highland athletics this year as well as a sectioned off toddler area. And when you want to take a break, the gentle breeze from Cayuga Lake and shade from the willow trees makes for a pleasant experience or you can enjoy a brew from award winning Ithaca Beer company or a glass of wine from MacGregor winery of the Finger Lakes.

Why is it an important event for the Celtic community there?
Before the launch of this festival, there was no one place for existing Celtic groups in Ithaca to gather. The festival has really brought the Celtic community together and each year we discover yet another group in Ithaca that has something to add – truly exciting to see such talent emerge. In central, NY alonethere is a well known bagpipe maker, kilt maker, Irish pipes maker, Lute specialist, Celtic jeweler, world ranked sheep herder, a Gaelic professor, Scottish Country dancers, a dedicated spinners guild, a whiskey distillery, a Scottish winery, historical reenactors, world champion Irish step dancers, fencers and there’s even a highland cattle farm. The festival has also helped form groups that had not before existed including our very own Finger Lakes Pipe Band. Now in its 4th year competing, the pipe band has garnered enough support to field both a grade 4 and 5 band…best of luck to them!

Why is it an important event for the non-Celtic community there?
The members of the Ithaca community love a great outdoor event and festivals filled with ethnic music are a perfect fit! It is our goal to educate everyone about the culture and its roots in both Scotland/ Ireland but also in the settlers in Central, NY. The event is held at Stewart Park after all and most residents don’t realize that our great Mayor Stewart of the last century was of Celtic decent. We offer lectures on our local Celtic history at our partner organization, the History Center in Tompkins County, that are quite popular. We also have “fun facts” posted around the athletic fences…its an unobtrusive way to learn a thing or two. I had a woman come up to me yesterday when she found out I organized the games, she was excited to tell me that at last years festival her husband found out via one of our clan tents that his roots were in Scotland, not Ireland as he and his family had thought for generations. Its nice to hear stories like that.

What are the plans for the festival in the years ahead?
We’ve pretty much set our foundation up in the first 5 years and now we plan on expanding each area of the festival year after year. Last year it was all about expanding our band and solo competitions. This year we focused on our fiber arts area, the highland athletics and our kids area and next year we looking to double our entertainment with another stage and line-up of Celtic Bands.

Is enough being done to preserve and promote Celtic culture?
Interesting question. I’ve always felt that the Celtic community does an amazing job at keeping their traditions alive – think St. Patrick’s day! Since I started the festival in 2008, there have been 3 other Celtic themed festivals launched in the Finger Lakes region itself. The bagpipes seem to resonate in the hills here. But more can always be done. Its a goal either this year or next to set up a non-profit in Ithaca for Celtic Groups to hold classes, take lessons or just chill.

What can we be doing better?
It would be great to see more highland dance in our community. The closest dance teacher is a few hours away and that’s rough for families with young kids. I keep sending out an SOS for someone to fill those shoes. I would also really like to see bagpipes as an option for a school instrument. In doing my own research it seems that there’s at least 1 bagpipe band per city in the entire county. That’s a lot of bagpipers!