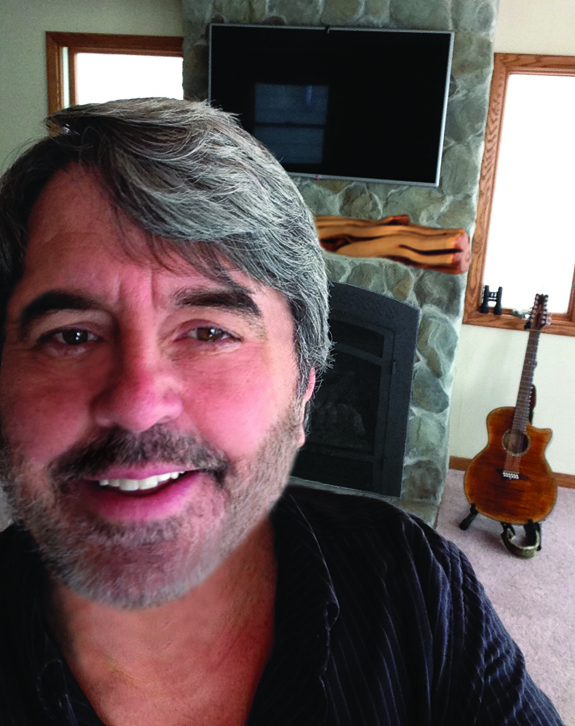 Author, musician, and publisher of the monthly cultural magazine Celtic Guide, James McQuiston is a man of many hats. Recently we spoke with him about his Celtic pride, passion and publication.

What is your own heritage?
While I have several Scottish/Irish families in my lineage, such as O’Cahan, Gunn, Denny, Davidson, Trindle, Harper, Stewart and McCandless, my two most current Celtic family lines would be the McGonnells out of Strabane, County Tyrone, who came to America in the early 1800s, and the McQuiston line out of Dungiven, County Derry, who came to America on August 6, 1735. Originally, McQuiston was Mac Uisdean in Gaelic, named for the sons of Uisdean McDonald, first Chief of the Sleat MacDonalds, Isle of Skye, Scotland. We are a recognized sept of Clan Donald, and have our own family society, Clan Uisdean, USA, Inc., formed 15 years ago. The current Chief of Sleat in Scotland still carries the patronymic of Mac Uisdean. We also have a relationship to Robert the Bruce in Scotland, and Sorley Boy MacDonnell in Ireland.

What is your professional background?
I’ve spent 43 years in the print and publishing field managing and/or owning print shops and weekly newspapers. Most recently, before my retirement, I spent nine years as Color Manager/Photoshop Director for a clothing catalog company, processing tens of thousands of fashion photographs.

Why the decision to start Celtic Guide?
I grew up attending “Irish” music sessions at my Uncle Joe McGonnell’s farm. The elders would play from ten in the morning sometimes until 4:00 am the next morning. They would argue the status of the McGonnells, McQuistons and other related families, as to whether we were Irish, Scotch-Irish or Scottish. Everyone had their own opinion. In my teens I was given a copy of an extensive hardbound McQuiston family history that a distant cousin had worked on for 19 years, compiling records from Ireland, Scotland, Canada and the United States. I found that I was related to a few horse thieves, but, on the whole, we had a pretty amazing history including a very likely relationship to President Andrew Jackson, and a certain relationship to Captain Jack McQuesten, the only man ever to be called Father of Alaska and Father of the Yukon. Also, in our family was Tom McQuesten who built the Rainbow Bridge at Niagara Falls specifically to join Canada and the U.S. in friendly cooperation. He built many other large projects in Ontario including much of the Niagara Parks System and the Botanical Gardens, and could certainly be called the Father of Ontario Infrastructure. With all these “heroes” in the family, and a lineage that was partially connected all the way back to Conn of the Hundred Fights of Ireland, to Robert Bruce, and to Somerled, and because of my youthful love of the heroic novels of Stevenson, London, Dumas and others, I began my own studies on the family. This led to studies of other family histories and of the history of the Celts, in general. I found the non-fiction adventures of these folks more exhilarating than any fiction could ever be. As I grew older, I wrote a few books, along with several articles for Highlander magazine, and for the Scotch-Irish Society newsletter. In 2012, I decided to go independent and produced my first Celtic Guide issue, completely written by me. Shortly after that first issue, I began being approached by others who had Celtic-related stories to tell. Now, in our fourth year we have had participants or contributors, in one form or another, from 15 different countries. Most contributors are from the U.S., Canada, Scotland, Ireland or England, however we’ve had participation from New Zealand, Australia, Poland, Germany, Romania, Wales, Austria, Portugal, and even Chile and South Africa.

What is the publication’s mandate?
I would say our mandate is to provide a forum for authors and artists, from expert to amateur, who have a love of Celtic history and culture. We have helped many go from just getting their feet wet as a writer, photographer or artist, to establishing a business and major web presence. Our stories are generally non-fiction history or at least myth-related. Occasionally, we accept fiction pieces if they fit well, particularly for our December issue which carries the theme of “Gifts.” All issue have a theme and it is fun to watch our contributors stretch the boundaries of that theme with unusual articles that I would have never known about or thought of. We generally stay away from pop-culture and current events, except in the case of music, as music is just one more way that Celtic culture is being preserved. Also, I continue to perform Celtic music, live, with my wife as the duo, “Celtic Creek.” The McGonnell music sessions began the year I was born, and I am still playing some of those very same songs all these years later. My 14-year-old niece has picked up the fiddle to match what all those old-timers were playing – the same songs, the same techniques, the same bone-chilling feeling up the spine. People hear about something, through an article or through a song, and it connects with them on a level they are driven to understand; as they research and study, they learn about themselves and about the remarkable history of the freedom-loving, artistic, family-oriented Celtic race. I am here to help that process along.

What has the feedback been like to the magazine from readers?
I can honestly say I’ve never received a bad email. I’ve been recognized by strangers at Highland Games and have received countless “thank-yous” for my work. Some readers have ended up as contributors. Contributors almost always contact me first, though I have gone fishing for a few where we had a specific need to fill, editorially. I had no idea where this would all go when I penned that first issue for January 2012. I am still amazed at every turn of the page.

How else are you involved with the Celtic community?
In addition to Celtic Guide magazine and our Celtic Creek music performances, I have written books and articles, have performed Celtic music hundreds and hundreds of times on stage, or at sessions, and recently I was accepted as a “Fellow” in the Society of Antiquaries of Scotland, based on my years of research and writing. I helped form Clan Uisdean, USA, 15 years ago, serving as president for six years and as historian for all fifteen years. Our goal is to preserve McQuiston family history, artifacts and cemeteries, and we’ve done that amazingly well. I helped form an organization in Aberdeen, Scotland, called Freens o’ Reid Harlaw (or Friends of Red Harlaw), an organization dedicated to preserving the memory and important historical significance of the 1411 Battle of Red Harlaw. I am also a member of the Irish Cultural Society of Erie County, Pennsylvania, and have spoken to the Erie Genealogical Society on Celtic DNA, and separately on Scotland during its recent bid for independence. Plus, I’ve pieced together an amazing story of an Irishman named Patrick Fitzpatrick, who was not only a hero of the War of 1812, but also a current hero of the anti-death penalty crowd. His is an incredible story and I have presented it a few times locally. Beyond all this, I have travelled to Scotland three times, met with Lord MacDonald, studied at the MacDonald Centre on the Isle of Skye with clan archivists and historians, and trekked nearly every corner of that great country. I also visited Ireland and Northern Ireland. In Belfast, the McQuiston Church holds the record for the largest ever Presbyterian congregation in Irish history, though I was raised in an Irish Catholic church. Dad was Presbyterian, Mom was Catholic. She won. At the McQuiston Church I took part in a ceremony commemorating its beginnings. Also, as Celtic Creek, we performed at Murphy’s Pub in Dungiven, Northern Ireland, where there has been continuous Celtic music every week for about 40 years. I stood at the Hill of Tara where apparently my ancestor once ruled from. I climbed the Giant’s Causeway, and Toor Head where I could see Rathlin Island and the shores of the Scottish islands. We explored many mystical and magical ruins from Dublin to Belfast, and back again. We also made a trip to Nova Scotia and Cape Breton to experience the wonderful music and culture there, and to Yukon and Alaska, while I was writing my book Captain Jack: Father of the Yukon. In both places we were able to sit it on music sessions and even on stage, playing Celtic music, of course.

From your perspective, is enough being done to preserve and promote Celtic culture generally?
Well, St. Patrick’s Day helps. We regularly give around ten performances in the days surrounding that holiday. Everyone wants to be Irish on that day and the St. Patrick’s Day Parade in New York City is the largest parade in the world. Boston, Savannah, Pittsburgh and many other towns have mammoth parades, too.  Also, National Tartan Day has given folks a more recent reason to assemble and celebrate, and it does seem like there are more smaller, independent Highland Games being established. Finally, magazines like mine and yours and the Highlander are reaching into homes with information not readily-found elsewhere, and “Celtic” performers in unlikely places like Austria and Romania are keeping alive their wee bit ‘o Celtic culture. Some folks connect New Age philosophy with Celtic Culture. Others rightfully connect the freedom the West enjoys with the trials and tribulations of the Scots and Irish. Grade schools and high schools are where the story needs to be told.

What can be done better in this regard?
I suppose persistence and patience are the watchwords. I think spreading the news about the Celtic race is like spreading seeds for a flower patch. Some are going to take, and others not, but the idea is to spread enough of them so that it makes a beautiful difference in the end.

What are your future plans for Celtic Guide?
Being retired, I can dedicate all the time I’d like to the Celtic Guide. From the beginning, I wanted its growth to be organic, and it has been, almost in spite of me. I have a professional proofreader and a Facebook guru who donate their time to help the cause. We seem to naturally come out at about the same number of pages each month. We have regular contributors who keep our boat steady, with a continuous influx of new blood to rock our craft a bit for the excitement of it all. A lot of people enjoy the Celtic Guide and enjoy participating, so I guess my role as Captain is to keep us on a steady course, even if I’m not sure where that course is heading.