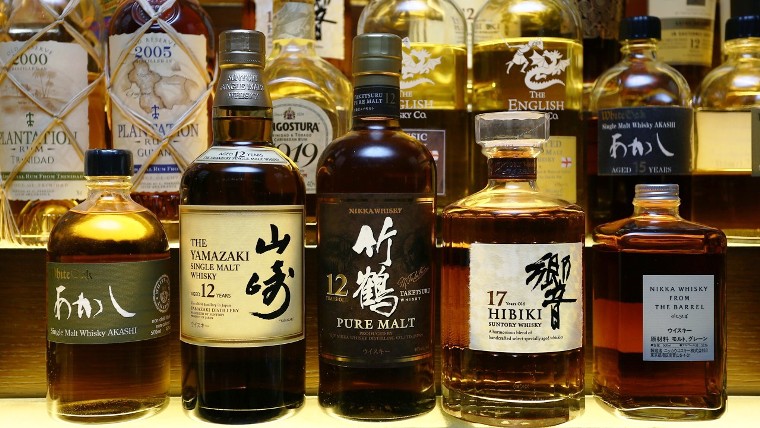 Whisky is currently produced in 23 countries around the world, and enjoyed in more than 200 countries. Perhaps surprisingly, the tiny island-nation of Japan is a leader in the field.

The Japanese love affair with whisky was born when the American Commodore Matthew Perry blasted open Japan’s front door to trade in 1854. In addition to cannon balls the Commodore left a cask and some bottles of American whiskey for the Emperor as a gift. The whiskey never made it as far as the Chrysanthemum Throne, it was allegedly nicked by the retainers of the Shogun. This first taste grew into a great thirst for whisky as Japan rapidly modernized along Western lines. The nation’s desire was to catch up to and surpass the Western powers in all things, including whisky.

1919 is a significant date with respect to whisky in Japanese history.  In April of 1919 Shinjiro Torri launched Tory’s whisky; it was a Scotch whisky, bottled for Japan. That same year a young student from Japan, Masataka Taketsuru, arrived in Glasgow to study Chemistry. His University studies were only part of the reason for his trip; it seems the main purpose was to learn everything he could about the production of Scotch whisky. Masataka spent more than six months working at various distilleries throughout Scotland during and after his time at Glasgow University. He filled journals with his newly acquired knowledge, and returned to Japan with a Scottish bride.

In 1924 the Yamazaki distillery began producing whisky in the forested hills between Kyoto and Osaka. Japan’s first whisky distillery was designed and built to be operated in the fashion of Scotland’s malt whisky distilleries. Yamazaki was founded by Shinjiro Torri on land he had purchased after the Great Kanto Earthquake, and his first distillery manager was not surprisingly a certain Masataka Taketsuru. Masataka had wanted to build Japan’s first distillery on the northern island of Hokkaido, in the town of Yoichi.

He believed the climate on Hokkaido was most similar to that of Scotland, and therefore the most suited to whisky production. Masataka left Yamazaki to found Yoichi distillery in 1933, Japan’s most northern and isolated distillery. Whereas Shinjiro’s Yamazaki Distillery would go on to become the foundation of the Suntory Drinks Company, Masataka’s Yoichi would do the same for the rival Nikka Whisky Co. Ninety years on Japan’s oldest distilleries, Yamazaki and Yoichi, are still regarded as its finest.

While Nikka and Yamazaki are the biggest players, they are not the only active distilleries in Japan. There are a couple of very small ones including the new Chichibu distillery west of Tokyo. This micro-distillery, roughly equivalent in size to Edradour is the brainchild of Ichiro Akuto, who’s family once owned Hanyu and Kawasaki distilleries. Everything at Chichibu is hands on, and very traditional, visitors (you have to be invited) are even asked to remove their shoes and don slippers around the still room.

Japanese whisky has long been one of the nation’s best kept secrets. Japan’s eight odd distilleries exist in a nation of 125 million whisky loving people. By comparison Scotland’s 100+ malt distilleries have a domestic population of just 5 million. While Scotland exports 95% of its whisky, Japan exports less than 5%. The demand for Japanese whisky is rising worldwide as well as at home. While we are starting to see some of these whiskies hit store shelves in North America, for some of them you still have to go to the source. ~ Story by Andrew Ferguson / www.kensingtonwinemarket.com

Yamazaki 12 Year – Spicy and chewy with lots of barley and vanilla cream.

Yoichi 15 Year – Fruity, spicy, floral and ever so slightly smoky, this is one very elegant whisky.

Hakushu 12 Year – Minty and floral, this dram is very fresh and refreshing as Hakushu highball with soda & mint.

Miyagiyo 15 Year – Soft and delicate with subtle spices, lots of fruit and malt.