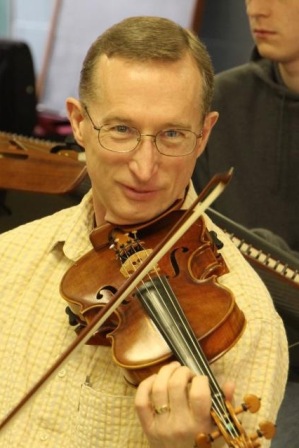 Fiddler Jim McKinney isn’t quick to claim Celtic ancestry despite his last name. He says on the McKinney side of the family the roots extend back to Virginia in 1750. On his mother’s side, he’s traced the family back to Virginia in 1762 and Pennsylvania in 1735. But while the 54-year-old fiddler believes he’s American as…well, apple pie, it turns out his ancestry is even older than he thought; members of his family have traced the name back to Scotland in 1570 or so. Besides, McKinney’s music comes with more than a dash of Gaelic.

McKinney’s the first to tell you the fiddlers at the Ann Arbor bars in Michigan early on influenced his playing. McKinney hung out at joints with names like The Old Town Tavern, Kitty O’Shea’s and Conor O’Neil’s to hear the likes of Irish players like Mick Gavin and Marty Somberg. Today, McKinney says “all of those ornaments are a big part of my style. Even when playing non-Irish tunes, I prefer the way they sound and feel when I add in the Irish cuts and rolls.”

Of course it comes as no surprise that the Celtic sound should find its way into McKinney’s style. He lives in Huron Township, Michigan, a small community of about 425 people just 20 miles from Detroit and not far from the Canadian border. As McKinney points a lot of musical influence spilled across the border.

“Historically, the old recordings I’ve heard of early Michigan fiddlers remind me a lot of early recordings of the Scottish-influenced fiddlers,” McKinney says. “Many Canadian fiddlers are influenced by Celtic traditions, so it only makes sense that some of our old-timers would sound like some of their old-timers.”

As you might have guessed, McKinney knows a thing or two about the instrument – not to mention his way around it as well. For the past 21 years, he’s played fiddle and guitar in The Golden Griffon Stringtet. The Stringtet is a family and friends affair. Wife Loretta plays the hammered dulcimer, while their 17-year-old son, Tommy, sometimes joins in on fiddle. Rounding out the group are friends Renzo Hutchinson on guitar and flute and Bob Ewald on the upright bass. Together, they’ve recorded four CDs of dance music and one of Christmas tunes.

On his own, McKinney’s won an online fiddle contest and placed second and third a few times in the Michigan State Championship Old-Time Fiddler’s Contest. He’s won the Nebraska String Teacher’s Association Fiddle Tune Composition Contest twice, and one of his tune was selected as one of four winners in the 2011 Strings Without Boundaries Composition Contest. In August 2013, he became the 30th and youngest member to become inducted into the Michigan Fiddlers’ Association Fiddlers’ Hall of Fame.

Outside of his playing, McKinney works hard to keep the fiddling culture alive. After Michigan fiddler Les Raber’s death in 2000, McKinney transcribed 12 of his tunes and published a tune book with his daughter, Judy. The resultant Come Dance With Me…Original Fiddle Compositions and Favorite Tunes of Les Raber is now in its fifth printing. McKinney has also published transcriptions of several other old-time Michigan fiddlers and is currently working on a biography and transcription of another.

That’s a hefty output for one man who didn’t even pick up the instrument until he was 27 years old. McKinney began playing the guitar in 1978 when friends of his began and he didn’t want to be left out. His grandfather offered to buy him a fiddle in 1987 and brought home a bright Chinese red violin, case and bow for $100. “I figured it sounded bad because I didn’t know how to play it,” McKinney laughs. A couple of weeks later his father-in-law brought him home a proper fiddle from a thrift store and it sounded better. “I took one, 30-minute lesson at a festival in April, 1987, where I learned how to hold the bow,” McKinney recalls. “After that, I was hooked.”

Since then, McKinney plays anything and everything going in terms of style. He says he began playing with a hammered dulcimer club in southeast Michigan, so learned what they played: Irish Washerwoman, Liberty, Redwing, Chinese Breakdown, Ragtime Annie and more. He enjoyed it so much he began going to every music club and gathering he could find, where he picked up the aforementioned Irish fiddling along with New England contra dance tunes, French-Canadian fiddle music, and Southern Old-Time music.. McKinney says he’s not so good at separating the different styles. “So my Southern Old-Time tunes all have five-note rolls in them and my French-Canadian tunes all have a little Nashville shuffle. It’s a mish-mash, but I have a lot of fun with it.”