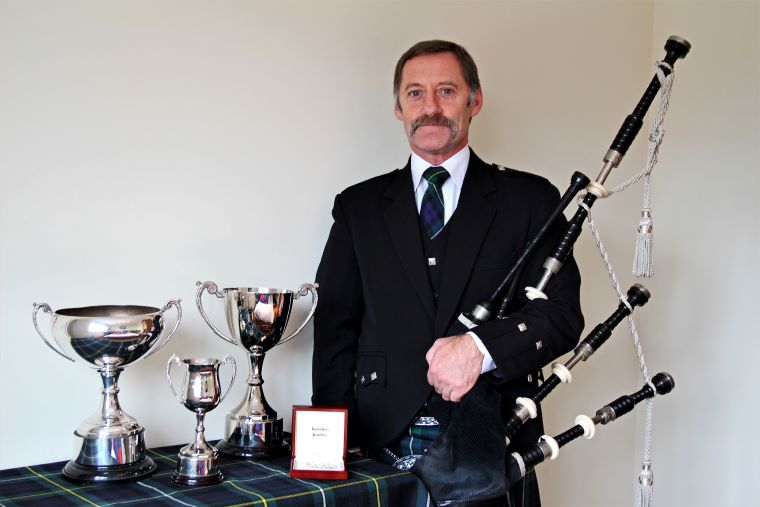 Choosing to play the pipes was no easy task for Welsh piper John Campbell.

“I have had a desire to learn a musical instrument for as long as I can remember,” he tells Celtic Life International via email. “But, with a 100 per cent effort mentality, this was somewhat of a barrier to starting an instrument; if I was to spend a lot of time in the effort of learning something completely new and improve, it needed to be the ‘right’ instrument for me.”

It was not until 1999, after hearing a piper practicing his set list, that Campbell first took interest.

“I was then curious as to how to begin. The piper offered some advice on the basics, which inspired the start of what, at that time, seemed an obvious choice of instrument as my father originated from Scotland.”

The 50-year-old has now been playing for just over two decades.

“The initial stages of my career were focused on playing the tunes correctly. I was soon part of a competing pipe band, which won two major championships. During that time, I also attended a number of solo piping recitals and quickly realized that this was where my interests truly were.”

In 2008, Campbell began competing as a solo performer, most notably with the Competition League for Amateur Solo Pipers’ (CLASP), an organization based in Glasgow. He considers his time with CLASP to be among his career’s most notable highlights.

“In just my second year of competing, I had an overall win (joint) at the World Amateur Solo Piping Championships in 2009. In 2011 and 2012 the competition successes helped me obtain an overall league win for that year. After promotion to the next grade, the successes continued, which gave me the confidence to consider playing for functions when asked.” 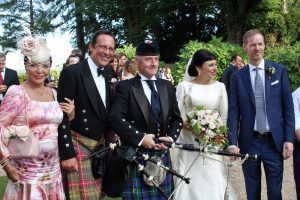 Currently plying his trade on a set of Peter Henderson Bagpipes, Campbell performs for specific clients and events. Among his services include weddings, funerals, corporate events, and birthdays.

He admits his career has been as challenging as it has been rewarding.

“Starting a musical instrument later in life had its own issues.”

“Realistically, there was – and is – a limit to the tempo in which I can play tunes. I have been settled with a similar instrument setup for a few years now. In competing terms, there were several avenues to compete as an adult amateur, although those opportunities have dwindled in recent years. An example would be the ‘dropping’ of all Adult Amateur events from an annual major London competition. Other competition avenues south of the border are not, in my experience, well supported. Since the inception of changes to the format of a competing league I have been part of, I have stepped back from the competitions. This is mainly due to time and expense, and the very limited number of competing opportunities closer to home. As long distances to compete from Wales are inevitable, I have to way up the balance of expense and competing against only one or two other pipers.

“Still, the rewards are numerous,” he continues. “I have the mentality that each of my clients are my competition, judge and jury. It is very satisfying. I have had many positive comments and reviews about my playing, conduct and approach to the clients’ wishes. In the competition environment it is very satisfying to come away with good results after playing tunes exactly as practised.”

Campbell believes that much is being done to preserve and promote Celtic culture.

“Schools in Scotland support younger folks in their Piping or Drumming aspirations.

For those showing real promise, they also have the National Youth Pipe Band to

aspire too. There is no provision in Wales, apart from street bands, however. Still, Novice Juvenile age groups still have an abundance of options including contests which are in alignment with the Adult Major contests.”

He hopes to make a return to online competing in the coming years. For now, however, he is content to sharpen his skills.

“I am attempting very difficult tunes that contain tricky embellishments. The aim is to overcome and improve my finger-work in weak areas. To date, a number of these tunes have been attempted and are starting to show positive results. Plans for 2020 are to the continue with these difficult tunes with the aim of playing them at live functions in the future.”